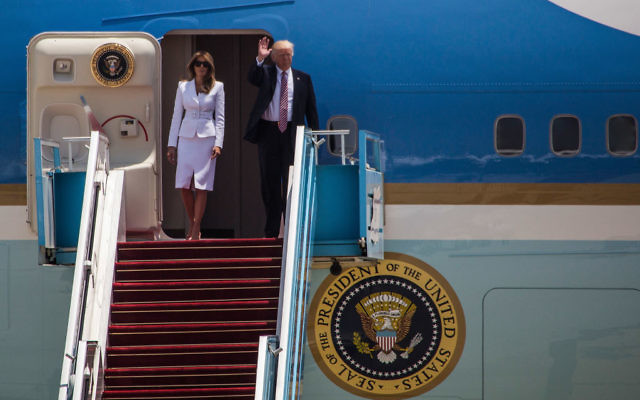 US President Donald Trump (R) and first lady Melania Trump disembark from Airforce One at Ben Gurion International Airport on May 22, 2017 near Tel Aviv, Israel. This will be Trump's first visit as President to the region, and his itinerary will include meetings with the Palestinian and Israeli leaders. Getty Images

More than 10,000 Israeli police units, counterterrorism units and border police will secure President Trump and his 1,000 person entourage during his visit to Israel, which begins today. There will be full security cooperation between the Israel Police and American security personnel during the two-day visit, Israel Police spokesman Micky Rosenfeld said, according to JTA.

The president will stay in Jerusalem’s King David Hotel in a bomb-proof, poison gas-proof and bulletproof hotel room built to withstand the collapse of the entire building, according to NBC News. All of the hotel’s 233 rooms will be occupied by people involved in the Trump visit.

The Foreign Ministry reportedly had originally said that attendance was optional. Government ministers reportedly had decided not to attend because they would be required to arrive 2.5 hours ahead of Trump’s arrival, go through a security check, and wait in the reception area. 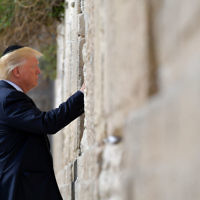 US President Donald Trump visits the Western Wall in Jerusalem on May 22, 2017. Getty Images 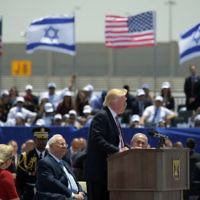 US President Donald Trump (C) gives a speech during a welcome ceremony upon his arrival at Ben Gurion International Airport in Tel Aviv on May 22, 2017, as part of his first trip overseas. / AFP PHOTO / MANDEL NGAN (Photo credit should read MANDEL NGAN/AFP/Getty Images) 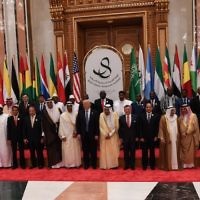 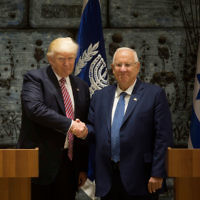 JERUSALEM, ISRAEL – MAY 22: (ISRAEL OUT) US President Donald Trump (L) shakes hands with Israel’s President Reuven Rivlin during a visit to the President’s House on May 22, 2017 in Jerusalem, Israel. Trump arrived for a 28-hour visit to Israel and the Palestinian Authority areas on his first foreign trip since taking office in January. (Photo by Lior Mizrahi/Getty Images) 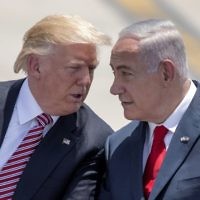 Israeli Prime Minister Benjamin Netanyahu (R) and US President Donald Trump speak upon the latter’s arrival at Ben Gurion International Airport in Tel Aviv on May 22, 2017, as part of his first trip overseas. Getty Images 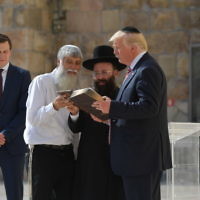 US President Donald Trump listens to Rabbi Shmuel Rabinovitch (C) during a visit to the Western Wall, the holiest site where Jews can pray, in Jerusalems Old City on May 22, 2017. On the left, Trump’s son-in-law and senior advisor Jared Kushner. / AFP PHOTO / MANDEL NGAN (Photo credit should read MANDEL NGAN/AFP/Getty Images) 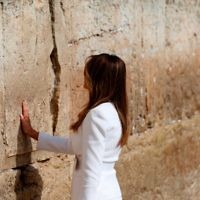 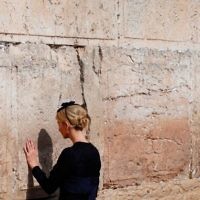 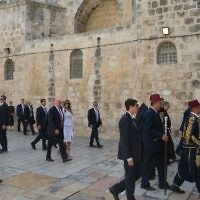 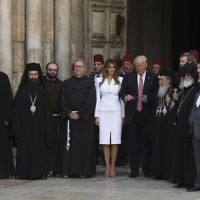 Rabbi Haskel Lookstein, emeritus spiritual leader of the Upper East Side Congregation Kehilath Jeshurun, who famously converted Ivanka Trump to Judaism, has reportedly denied giving the first daughter and her husband Jared Kushner, both Orthodox Jews, rabbinical approval to fly during Shabbat last week while accompanying President Donald Trump on his first trip overseas. Israeli media reports that the rabbi is said to have told Zionist Union leader Isaac Herzog that speculation he granted the couple the rabbinical dispensation was “fake news.”

Rabbi Lookstein’s denial came after a White House official said the couple had received a rabbinical dispensation to join the president aboard Air Force One as he set off to Saudi Arabia on Friday.  In addition to flying on Shabbat, Ivanka and Jared were also seen riding in a car around Riyadh on Saturday as they were ferried to meetings around the Saudi capital.

A Williamsburg charity is suing the city to obtain a tax break in what political insiders call “mayoral payback” for organization’s leader’s role in an ongoing circumcision controversy, the New York Post reports.  The city wrongfully revoked a property-tax exemption of a building owned by the United Jewish Organizations, the group claims in a lawsuit filed Friday in Manhattan Supreme Court.

City officials said they were open to revisiting the issue if UJO filed an appeal of the revocation. But insiders said the city’s move was a sign that Mayor de Blasio is displeased with the group’s leader, Rabbi David Niederman, who has tussled with City Hall over the regulation of mohels who practice an oral circumcision—metzitzah b’peh ritual (more on that here.)

UJO is converting a property at 500 Bedford Ave., which has been tax exempt since 2001, into a condo. The city said the building’s change in mission disqualified it from an exemption.

Members of Berlin’s Social Democratic Party have passed a resolution in support of Israel, condemning the BDS (boycott, divestment, sanctions) campaign targeting the Jewish state., according to the Jerusalem Post. The party’s 17,500-member organization declared at its convention that “they oppose the antisemitic BDS campaign” and “condemn sharply widespread anti-Zionist antisemitism.”

The resolution said the SPD Berlin “stands in solidarity with Israel, and the recognition of Israel’s right to exist and self-defense are for us non-negotiable.” Chancellor Angela Merkel’s Christian Democratic Union last year party approved a resolution terming BDS anti-Semitic.

Some 300 Jews from around the world, together with Israelis and Palestinians, camped out near the settlement of Maon in the West Bank this weekend rebuilding what they claimed was a former Arab village, according to the Jerusalem Post. The activists, mostly from the leftist Center for Jewish Non-Violence, pitched tent pegs on the rocky rubble of caves that once housed Palestinians in the south Hebron Hills village of Sarura. 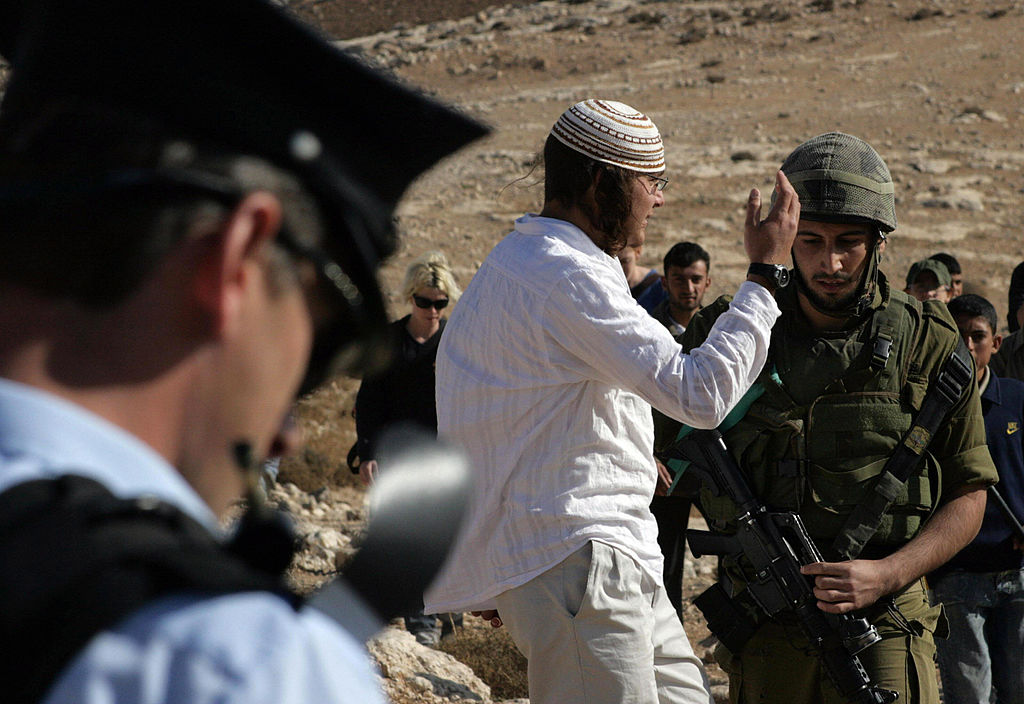 A Jewish settler argues with an Israeli soldier trying to prevent a demonstration in Maon, near the West Bank city of Hebron, in December 2007. Getty Images

A spokesperson for COGAT—the army unit that administers the area—declined to comment on the protest, which occurred in Area C, or the part of the West Bank under direct Israeli control

Approximately 10 Palestinian families dwelled in Sarura until the Israeli army removed the seasonal residents in 1999 – sealing the caves and prohibiting their return – according to a report from the human rights organization B’tselem. The army subsequently declared the site a closed military zone, saying it was needed for infantry target practice.

A Moscow district court has ordered an Israeli-born religious consultant, Rabbi Yosef Khersonsky, to leave the Russian Federation in connection with his “setting up without permission a for-profit foreign entity,” according to Haaretz. The court did not specify the nature of the entity.

In March, a Russian appeals court affirmed an expulsion order issued against an American rabbi working in Sochi in what a local leader of the Chabad movement called a “dark day” for Jews. In its ruling against Ari Edelkopf, the Krasnodar Court of Appeals accepted the determination of a Sochi tribunal that Edelkopf, who had been working as Chabad’s emissary to the city, was a threat to national security.

Boruch Gorin, a senior Chabad rabbi in Russia, told the AFP news agency that both expulsion orders were part of an attempt by Russian authorities “to replace our foreign rabbis with Russian ones, to head communities so that they [the authorities] could control them better.”

Approximately half of the 70 rabbis working for the Chabad-affiliated Federation of Jewish Communities of Russia are foreign.

The World Values Network, a Jewish organization headed by Rabbi Shmuley Boteach, yesterday dedicated a Torah scroll to the people of Rwanda, during its annual gala dinner in Manhattan. According to the Jerusalem Post, the scroll, which will bear the name of the late Elie Wiesel, will be brought later this year to a Jewish center that is being built in Kigali, the capital of the African country.

Rabbi Boteach, who has visited Rwanda several times, met with officials, including President Paul Kagame, whom he describes as “a phenomenal friend of Israel.”