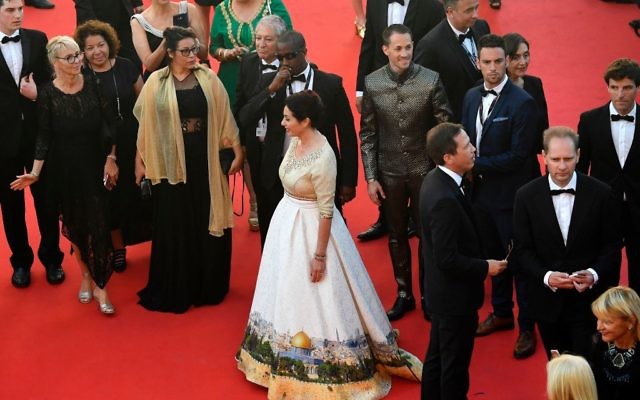 Israeli Culture Minister Miri Regev wearing a dress featuring the old city of Jerusalem arrives on May 17, 2017 for the screening of the film 'Ismael's Ghosts' (Les Fantomes d'Ismael) during the opening ceremony of the 70th edition of the Cannes Film Festival in Cannes, southern France. Getty Images

Israeli Culture and Sports Minister Miri Regev “managed to surprise the audience at the Cannes Film Festival” yesterday when she stood on the red carpet with a “conceptual dress of Jerusalem,” ynetnews.com reports. The dress, designed by Israeli designer Arik Aviad Herman, features familiar elements of the Israeli capital such as the Golden Dome and the Western Wall.

Regev planned the dress in advance to dedicate it to Jerusalem Day, which will begin next week, and to mark the 50th anniversary of the liberation of Jerusalem in the Six-Day War. 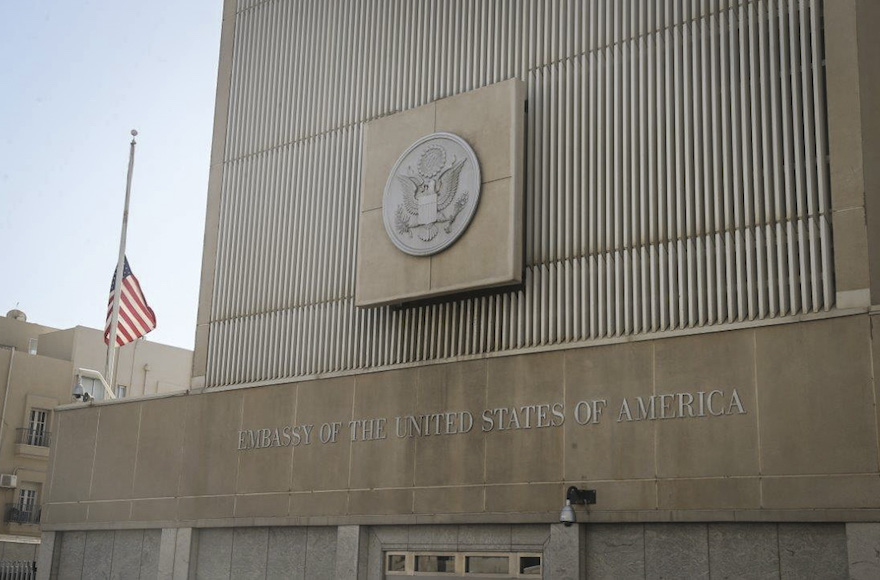 The Trump administration reportedly will not move  the U.S. Embassy to Jerusalem from Tel Aviv for now, JTA reports. An unnamed senior administration official said yesterday that it would be “unwise to do it at this time” as President Trump prepares to restart Israeli-Palestinian talks. “We’ve been very clear what our position is and what we would like to see done, but we’re not looking to provoke anyone when everyone’s playing really nice.”

Congress recognized Jerusalem as Israeli in 1995, but successive presidents have waived a provision in that law that requires the United States to move the embassy there from Tel Aviv.

Trump campaigned on a pledge to move the embassy, but has retreated from it since assuming office.

The Dean of Humanities at the University of Jerusalem has decided not to play HaTikvah, the Israeli national anthem, at the school’s graduation ceremony Thursday evening, according to the Jerusalem Post. The paper said the decision was made in order not to affront Arab students.
HaTikvah means “The Hope.”

Governors of all 50 states have signed a pledge to reject the Boycott, Divestment and Sanctions movement against Israel, JTA reports. Organized by the American Jewish Committee, the Governors United Against BDS statement declares that “the goals of the BDS movement are antithetical to our values and the values of our respective states, our support for Israel as a vital U.S. ally, important economic partner and champion of freedom.”

The statement does not commit the governors to specific actions, although signers “reaffirm our support for Israel as a vital U.S. ally, important economic partner and champion of freedom.” At least 16 states have passed legislation targeting BDS, usually by banning state entities from investing in businesses that boycott Israel or its settlements.

WHO: Israeli life expectancy among highest in world

A maternity ward at a hospital in B’nei Brak.

The World Health Organization’s latest report on the health statistics of 35 countries with well-developed economies places life expectancy in Israel near the top, the ynetnews.com reports. The WHO’s study includes life expectancy, maternal and infant mortality, child mortality, the state of sanitation, the rate of use of alcohol and drugs and other indices characterize the level of medical services and preventive medicine.

According to the report, the average life expectancy in Israel (average between men and women) is 82.5 years, placing Israel eighth in the world.

A prisoner who identifies himself as Jewish is suing the British prison service after claiming he had nothing to eat for 19 days after staff refused to serve him kosher food until he “proved” he was Jewish, the London Daily Mail reports. John Reuben, an inmate at HMP Lancaster Farms, a 550-capacity jail in Lancashire, said that he was left with no kosher food for five days at a Manchester jail and then for 14 days when he was transferred to his current facility.

He said prison workers said he had to “have his faith confirmed” by a rabbi before they could order kosher food for him – which costs around four times more than “normal prison grub.”

In the past year, the paper reports, “hundreds of prisoners have claimed to be Jewish in order to get better quality meals.”