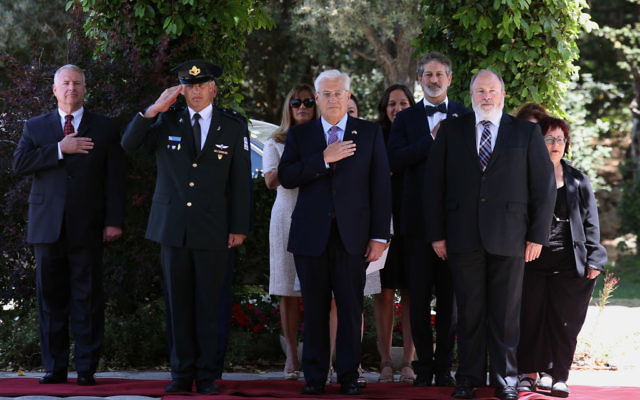 US ambassador to Israel David Friedman (C) arrives to the presidential compound in Jerusalem on May 16, 2017 to present his diplomatic credentials. Getty Images

A second accuser has come forward in the case of a Jewish teacher and youth group director being held in central New Jersey for the alleged sexual assault of a 12-year-old boy, JTA reports. The additional charges were filed against Rabbi Menachem Chinn in Mercer County after the second accuser, now an adult, told authorities that the rabbi had inappropriate sexual contact with him between July 2010 and May 2011.

During the ceremony Tuesday morning, Rivlin identified himself as a seventh-generation Jerusalemite and noted.”Next week, we will celebrate 50 years since Jerusalem was united, and the Jewish people were able to once again pray at the Western Wall. But Jewish Jerusalem is not 50 years old. Since the days of King David, this city has been our capital. It is time for the whole world to recognize Jerusalem as the official capital of the State of Israel. De facto, not just de jure.”

Israel still ranks among the top military powers in the world, but has dropped from 11th place a year ago to number 15. According to arutzsheva, the Global Firepower website ranks military capabilities based on no fewer than 50 factors, including diversity and amount of weaponry, geographical position, natural resources, and manpower. 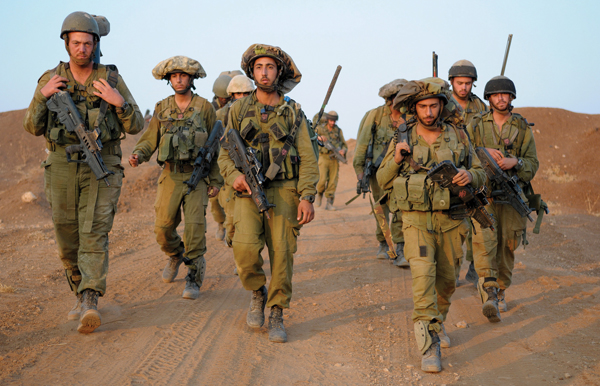 The IDF has dropped in international rankings, but still remains high. Wikimedia Commons

Israel has an annual defense budget of $15.5 billion and it commands 160,000 active frontline personnel. Egypt, which was #18 last year, is now ranked at #11, and Turkey is in eighth place. Iran, which has repeatedly declared that it wishes to destroy Israel, is #20.

The top four remained the same as last year: The United States,  Russia, China and India.

Reported remarks by a Trump administration official rejecting Israel’s claim to the Western Wall were “unauthorized” and do not represent the position of President Donald Trump, the White House said, according to JTA. “The comments about the Western Wall were not authorized communication and they do not represent the position of the United States and certainly not of the president,” a White House official said.

The remark that the Western Wall “is not your territory, it’s part of the West Bank” reportedly arose during conversations between an advance team planning Trump’s upcoming visit to Israel and officials in Prime Minister Benjamin Netanyahu’s office.

Gulf States edge closer to to ties with Israel

A plan under discussion among Gulf state leaders would reportedly offer better ties with Israel if the Jewish state takes “real action” toward reach peace with the Palestinians, the Times of Israel reports.

Among the measures the states want to see, according to the paper, are a settlement construction freeze and an easing of the blockade on the Gaza Strip. In return, Gulf States would lift some trade restrictions, open direct telecommunications, and allow Israeli aircraft to overfly their countries, the report said. Other incentives under consideration are the issuing of visas to Israeli sports teams and trade delegations for events in Arab states and opening the region for Israeli trade and business.

A monument to a non-Jewish Polish resistance fighter Capt. Witold Pilecki was unveiled in Warsaw, JTA reports. The monument honors the man who during World War II allowed himself to be captured and sent to Auschwitz in order to report on the atrocities there.

Pilecki wrote and smuggled out secret reports from Auschwitz to his superiors before fleeing in April 1943, where he headed to Warsaw and fought in the Polish resistance. After the war he went to Italy but returned to Soviet-dominated Poland, where he was executed in 1948 for espionage and treason by the communist authorities. His body was buried in a mass grave.

Helen Lieberman, a Jewish woman from South Africa who during the height of apartheid founded an organization that has grown into the country’s largest social services provider, was named a recipient of France’s prestigious Officier de la Légion d’Honneur award (National Order of the Legion of Honor, according to the South African Jewish Report.

The award honors “her lifelong commitment to the eradication of poverty, injustice and human misery.”

French Ambassador Christophe Farnaud announced that the French embassy was also giving a grant of $8,800 to Ikamva Labantu.