A feel-good video of the pope dancing with a group of rabbis at the Vatican this week has drawn criticisms from one of the rabbis who took part, JTA reports. Rabbi Dovber Pinson, a Chabad rabbi and the dean of the Iyyun Yeshiva in Brooklyn, wrote a letter of apology to students and friends, stating that the viral video is “unfortunately clouding the important mission I was there to accomplish.”

Contributors to the haredi Orthodox Yeshiva World News website debated whether the group of rabbis should have met with Pope Francis, and whether rabbis should have engaged in music and singing during the days of semi-mourning leading up to Lag b’Omer, a minor festival to be marked on Sunday.

Rabbi Pinson, who took part in the ecumenical meeting in the pope’s private office to discuss ideas of “pure monotheism,” wrote that the singing and dancing began “spontaneously without my foreknowledge or consent,” and that he did not want to embarrass the singers or the Pope by cutting it off too quickly. The pope was seen in the video swaying to the music.

The pontiff held a 45-minute audience with the group, which was led by Rabbi Edgar Gluck, 80, who divides his time between Brooklyn and Poland.

A memorial to Holocaust diarist Anne Frank in Boise, Idaho, was vandalized with anti-Semitic and racial slurs, JTA reports. The damage at the Anne Frank Human Rights Memorial, located in a nearly one-acre memorial park maintained by the Boise Parks and Recreation Department in partnership with the Wassmuth Center for Human Rights, will cost about $20,000 to repair. 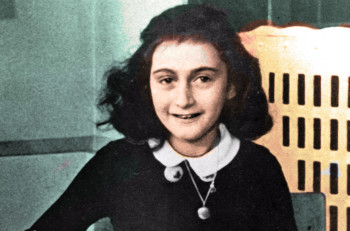 The anti-Semitic graffiti was written in permanent ink on a marble tablet that contains a list of the names of the donors to the memorial. A racial slur and a message declaring that black people are not human was written directly below the engraved first paragraph of the Universal Declaration of Human Rights.

Built by the Idaho Human Rights Education Center, the privately funded memorial opened in August 2002 as a gift to the city.

The political situation of Turkey following a failed coup last July and a referendum that significantly increases the powers of President Recep Tayyip Erdogan, pushes Turkish Jews to feel instable, according to the European Jewish Press. “Their school and synagogues are behind security tunnels, shielded by steel blast protection.”

The news service reports that Jewish immigration from Turkey is increasing, apparently reflecting “a growing insecurity among Turkish Jews, many of whom blame Erdogan of using anti-Israel rhetoric with anti-Semitic overtones.”

Chinese investments in Israel are rising

Struggling to seal deals in the United States as regulatory scrutiny tightens, Chinese companies looking to invest in promising technology “are finding a warmer welcome for their cash in Israel,” ynetnews.com reports.

“Last year, Chinese investment into Israel jumped more than tenfold to a record $16.5 billion, with money flooding into the country’s buzzing internet, cyber-security and medical device start-ups. These investments surged in the third quarter just as the US regulatory crackdown began to bite.”

The British medical journal The Lancet has published a special issue on Israel three years after publishing an open letter that accused Israel of committing war crimes in Gaza, JTA reports. The special issue, titled “Health in Israel: Progress and Challenges in a Region of Conflict,” was unveiled this week in Tel Aviv.

In the August 2014 issue of the Lancet, “An open letter for the people of Gaza” accused Israel of a “massacre” in Gaza during the war between Israel and Hamas, as well as “cruel” and “vicious war crimes.” Physicians, researchers and Israeli officials decried the letter, which was signed by several dozen Western doctors.

Dr. Richard Horton, editor-in-chief of the Lancet, visited Israel that October and then wrote in an editorial that he regretted publishing the letter. He announced in that editorial that he would devote an issue to health care in Israel.