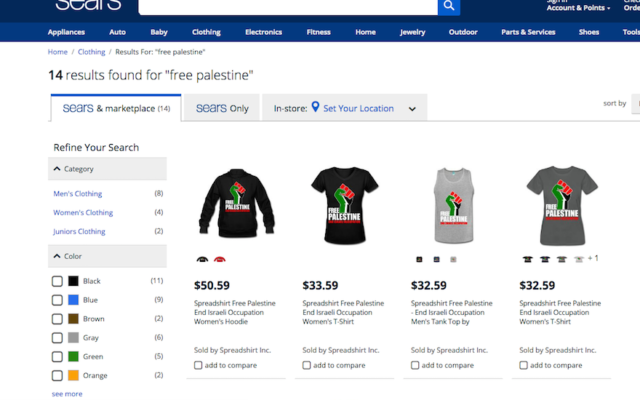 Sears says it will remove a line of clothing featuring the slogan “Free Palestine” from its website. (Screenshot from Sears.com)

Sears says it will remove a line of clothing featuring the slogan “Free Palestine” from its website, the Jerusalem Post reports. The clothing was offered for sale by another company, Spreadshirt Collection, and included tank tops, t-shirts and hoodies featuring a variety of pro-Palestinian messages.

The clothing was offered for sale through Sears Marketplace, which offers a platform for third-party sellers to offer their wares through websites managed by Sears. The designs included a clenched fist in the colors of the Palestinian flag and statements opposing “The Israeli occupation.”

A Sears representative said the company “will be removing the items soon. We do not want our members to be unhappy.”
According to a statement from a Sears spokesman, the apparel was pulled from the site based on feedback the company received.

The teenage daughter of the University of Surrey’s Jewish chaplain in England was allegedly beaten by an anti-Semitic gang and left bleeding in a park for two hours late last month after police failed to respond to an emergency call, according to the Algemeiner.

Hannah Goldberg was reportedly sitting in a public park with two friends on the Shabbat of May 27, when a group of five men approached them with comments like, “Hitler should have killed all you Jews when he had the chance” and “You should have all been gassed,” the paper reported.

One of the boys threw a basketball at Hannah’s face and kicked her in the chest, while another boy punched her in the face repeatedly. Hannah’s friends approached a nearby postal worker for help, who in turn called the Metropolitan Police Service, who never arrived.

Rabbi Tully Harcsztark, founding principal of SAR High School in Riverdale, and Meredith Englander Polsky, national director of Institutes and Training at Matan in New York, were among Jewish educators named recipients this week of the Award from the Covenant Foundation, the New York-based philanthropy announced.

The Award is considered among the highest honors in the field of Jewish education.

“These Jewish educators exemplify inspired, courageous and visionary leadership,” said Cheryl Finkel, Chair of the Board of Directors of The Covenant Foundation and a former Covenant Award recipient. Along with the recognition that accompanies this award, each recipient will receive $36,000 and each of their institutions will receive $5,000.

Rabbi Moti Elon, a prominent educator in Israel who was convicted of indecent assault against a minor less than four years ago, this week opened a study center in central Jerusalem, Israeli media reports.

Elon was convicted on two counts of indecent assault by force against a minor in August 2013, but never served any jail time. Instead, he was given a six-month commuted sentence which he served in community service. According to an assistant, the rabbi, who lives in northern Israel, has been teaching in Jerusalem ever since his conviction with several hundred people attending his lessons.

His new study center, Beit Vaad U’Midrash, will host religious lessons and lectures throughout the week. Rabbi Elon himself will teach three times a week on topics of Jewish law and mysticism.

Surrounded by Israeli flags and dozens of balloons, 72 new Ethiopian immigrants arrived at Ben-Gurion Airport yesterday, the first group to immigrate since the government “resumed” Ethiopian immigration last October, according to the Times of Israel.

In August 2016, a year after the government first announced it would bring those still awaiting immigration, the Finance Ministry agreed to allocate money to allow 1,300 Ethiopians to come, the first step of a five-year program to bring 6,000 new immigrants at a rate of approximately 100 per month.

The process for immigration approval has been plagued by accusations of racism and inefficiency against the Interior Ministry. Two additional flights are planned for June, including one next week with almost 100 people.