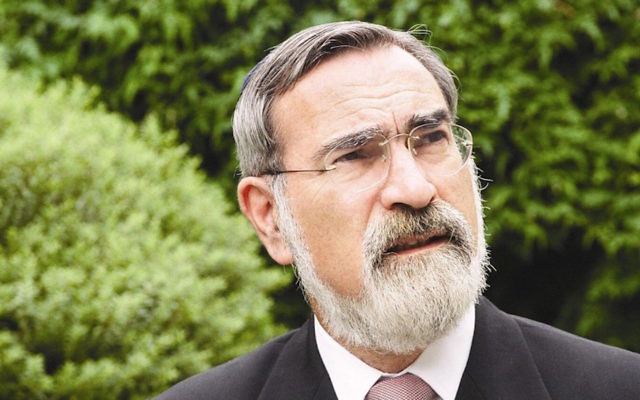 Rabbi Jonathan Sacks: All Jews have a place at the Western Wall

Rabbi Jonathan Sacks, former chief rabbi of the United Kingdom, suggested this week that the type of egalitarian worship services at the Western Wall to which Israel’s charedi parties are opposed “has a place,” the Times of Israel reports. At a meeting in London sponsored by Gesher, an Israeli organization that promotes dialogue between the secular and religious, and Israel’s Diaspora Affairs Ministry, he said, “each side has a place to pray.”

He said the Western Wall dispute should be resolved by “dialogue” among the various denominations of Judaism, rather than by political means.

The rabbi, who is Orthodox, said the Israeli government’s reversal on its earlier decision to allow non-Orthodox services at Judaism’s holiest site, which would bar an egalitarian prayer space, does not mean that “liberal Jews were … defeated.”

“Neither side should exaggerate on the issue,” he said. “We must not think of victory or defeat.”

Following the arrest this week of at least seven couples in the charedi community of Lakewood, N.J., on welfare fraud charges, the city’s rabbinical council declared that “[t]here is no such thing as ‘justified’ theft,” JTA reports. In a statement issued yesterday by Rabbi Moshe Zev Weisberg in the name of the Lakewood Vaad, the leaders said the accused are “innocent until proven guilty,” and that they would “suspend judgment until the disposition of these charges.”

The four couples arrested Monday were charged with underreporting their incomes to receive government benefits. Some of the couples are alleged to have hidden millions of dollars in assets while collecting tens of thousands of dollars in Medicaid and other benefits.

“There is no such a thing as ‘justified’ theft,” according to the statement. “Federal and State social safety-net programs are meant for those in need, even those in need have rules and criteria that must be strictly followed. To deliberately bend a safety-net eligibility rule is stealing, no different than stealing from your friend or neighbor.”

The statement called on community rabbis, teachers and parents to “redouble and triple our efforts in our communities, reminding each and every one of us that there is never any excuse for dishonesty in any form.” The Vaad pledged to launch a series of “intensive educational programs” to address the issue.

Rabbi Daniel Greer, former principal of the Yeshiva of New Haven, who was found guilty last month by a federal jury of sexually abusing one of his students in the Connecticut day school, is requesting a new trial, the New Haven Independent reports. And the rabbi is also asking for the $20 million verdict against him to be thrown out, according to the paper.

The grand jury convicted Rabbi Greer on charges that he had repeatedly sexually abused Eliyahu Mirlis and another student over a period of years.

Women who read from Torah at Marseille synagogue are threatened

Women who read aloud from the Torah at a synagogue in Marseille last Shabbat were subjected to threats and insults by congregants after local rabbis condemned the event, according to JTA. The dozens of threats and insults, made on social networks and in emails, started coming in after the half dozen women read the Torah at the Fleg Jewish Center.

Raymond Arouch, president of the congregation, Martine Yana, its director, said in a statement that the threats were of “all kinds of assaults” and were “intolerable.” They did not cite examples of the abuse.

“The reading of the weekly portion by a woman in the framework of a religious ceremony is not permitted in the Halakha,” the chief rabbi of Marseille, Reuven Ohana, wrote in a statement. “We ask the people involved not to offend the sensibilities of the public,” he added the rabbi in a letter co-signed by two other spiritual leaders from Marseille, which is home to France’s second largest Jewish community of approximately 80,000 members.

A senior trade union figure in South Africa who threatened the Jewish community must offer an “unconditional apology,” a South African court has ruled, according to JTA. The Equity Court said Bongani Masuku, international relations spokesman for the Congress of South African Trade Unions (COSATU), must offer the apology through the South African Jewish Board of Deputies umbrella organization.

The Jewish Board had filed a complaint in April 2009 against Masuku with the South Africa Human Rights Commission following what it called “various threatening, inflammatory and derogatory statements” against the mainstream South African Jewish community and its leadership. The complaint detailed how Masuku, speaking at the University of the Witwatersrand as well as in written communications, had threatened to target South African Jews who supported Israel, saying they should be “forced to leave South Africa.” He said Jews’ lives would be made “hell” and that vigilante action would be taken against families suspected of having members who served in the Israeli army.

In December 2009, the Human Rights Commission concluded that Masuku’s comments constituted hate speech against the Jewish community and directed him to apologize. The commission turned to the Equity Court to have its ruling enforced when Masuku, backed by COSATU, refused to apologize.

An all-girls charedi school in London risks closure after failing a third inspection in the space of just over a year by the Office of Standards in Education, Children’s Services and Skills (OFSTED), according to the Jerusalem Post. These “failures stem in large part” from the school’s refusal to teach about a range of LGBT-related issues including homosexuality and gender reassignment, the paper reports.

British law, as set out in the Equality Act 2010, makes it mandatory for British schools to educate on a range of “protracted characteristics,” including age, disability, race, sex and sexual orientation.

The leaders of Vishnitz Girls School, in the east London borough of Hackney, whose students speak Yiddish as their primary language, maintain that such teaching to young girls about sexuality violates the Orthodox Jews’ religious principles.

Some 74 Palestinian employees of SodaStream, who lost their jobs when the company shut its West Bank plant in the face of international pressure last year, are return to work at its factory in southern Israel this month, JTA reports. The employees’ work permits, which allowed them to enter Israel from the West Bank, expired in February 2016. 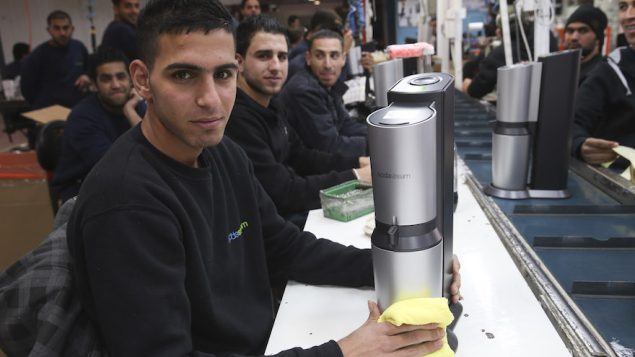 The Israeli government agreed to reinstate the permits after persistent requests from SodaStream and its CEO Daniel Birnbaum. “We are delighted to welcome back our 74 devoted Palestinian employees, who are able to join their 1,500 friends at our Rahat facility in the Negev,” Birnbaum said. “The Israeli government did the moral and honorable thing to grant work permits to our employees, who can now provide for their families and also prove that coexistence is possible.”

In October 2014, SodaStream announced it would close its factory in Maale Adumim and move to southern Israel in the face of pressure from the Boycott, Divestment and Sanctions (BDS) movement, which seeks to hurt Israel’s economy over its policies toward the Palestinians. The movement claimed that SodaStream discriminated against Palestinian workers and paid some less than Israeli workers.

Some 500 Palestinian employees lost their jobs at that time. Israel gave the remaining 74 employees permission to enter the country and continue to work for SodaStream until February 2016.