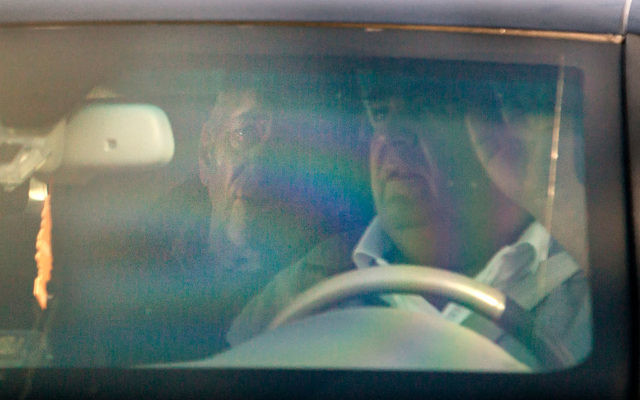 Former Israeli Prime Minister Ehud Olmert (L) sits in a car as he leaves his home in Jerusalem to go to Maasiyahu prison to begin serving time for corruption on February 15, 2016. Olmert was granted early release from prison today after falling ill. Getty Images

Former Prime Minister Ehud Olmert was granted early release from prison today, and is set to be released on July 2, according to Haaretz. Olmert was hospitalized last week after feeling unwell and returned to prison on Tuesday. A photo of the former prime minister disseminated on social media showed him wearing hospital garb and looking unwell.

Olmert in February 2016 began serving a 27-month sentence on charges including fraud and bribery.

Three more couples were arrested as part of a crackdown in a haredi Orthodox community in New Jersey on illegally obtaining government benefits.

The couples arrested Tuesday night in Lakewood allegedly obtained over $670,000 in total in government benefits fraudulently, according to NJ.com.

They are Yitzchok and Sora Karanek, Chaim and Liatt Ehrman, and William and Faigy Friedman.

On Monday, four couples were arrested in the same probe for underreporting their incomes to receive government benefits. A rabbi was among those arrested.

“My office gave clear guidance and notice to the Lakewood community in 2015 of what is considered financial abuse of these programs,” Ocean County Prosecutor Joseph Coronato said on Monday. “Those who choose to ignore those warnings by seeking to illegally profit on the backs of taxpayers will pay the punitive price of their actions.”

Knesset members who vote for conversion bill not welcome in Chicago

Knesset members who vote for a conversion bill making its way through the Knesset, which would recognize only conversions done under the auspices of the Chief Rabbinate, will not be welcomed by Chicago’s Jewish community, said Steven Nasatir, president of the Jewish United Fund/Jewish Federation of Metropolitan Chicago.

“The federation in Chicago will not be hosting any member of Knesset that votes for this bill. None. They will not be welcome in our community,” Nasatir said, according to JTA. “We’re past the time when we’re standing and applauding and being nice because they’re members of Knesset or because they hold this position or that position.”
Nasatir, whose federation last year allocated over $29 million for beneficiaries in Israel and overseas, said he would not be surprised if other Jewish federations take similar positions.

A vandal used a rock to shatter a glass panel on the New England Holocaust Memorial yesterday, CBS News reports. Boston Mayor Marty Walsh said, “As a city we stand with the Jewish community.”

Police responding to a call from a witness found a roughly 9-foot tall glass panel on one of the memorial’s six 54-foot-high towers shattered. They quickly arrested James Isaac, 21, of Boston, and charged him with malicious destruction of personal property and destruction of a place of memorial.

A synagogue in Australia whose administrators were legally prevented from sacking its rabbi  will close on Friday, the administrators have said. According to the Sydney Morning Herald, the controversy at the South Head synagogue in Sydney centers around bitter recent disputes between the synagogue’s board and its chief rabbi of 32 years, Benzion Milecki.

The board attempted in April to fire the rabbi, but the Supreme Court has ruled that the board lacked the capacity to “sack Rabbi Milecki.” Justice Paul Brereton ruled that, under the terms of his contract, Rabbi Milecki could be terminated only by a Jewish court in accordance with Jewish law.

Synagogue administrator Anthony Elkerton wrote to congregants this week to say the synagogue needed third party funding to continue and, with that funding unforthcoming, the “the Synagogue will cease to operate from midday on Friday, 30 June.”

A leading Polish human rights official has come under fire for saying the “Polish nation” took part in the implementation of the Holocaust—a controversial statement in a country whose official view is that Poland never collaborated with Nazi Germany during World War II, ynetnews.com reports.

The statement was made on a state-run television station by Adam Bodnar, the country’s human rights commissioner. He said, “There is no doubt that the Germans were responsible for the Holocaust, but many nations took part in its implementation. Among them—and I say this with regret—the Polish nation.”

Bodnar quickly apologized for his choice of words and clarified that he did not mean to say that the entire nation took part in the Holocaust, only that some Poles had committed crimes against Jews, but members of Poland’s conservative government nevertheless said he should resign.

The behavior of Poles toward Jews during Germany’s wartime occupation of Poland remains an extremely sensitive subject. Poland was subjected to a cruel occupation during the war and was the site of many death camps where the Germans murdered Jews, Roma and other minority groups.

A group of Muslim girls from Germany said they were prevented from entering a synagogue in Lublin last week while on a visit to Poland to study the Holocaust, according to JTA. The girls claim they were refused entrance to the synagogue at the Chachmei Lublin Yeshiva because they were wearing traditional Muslim headgear.

The Jewish community of Lublin has denied the claim, saying in a atatement a that the group was turned away because the hotel where the synagogue is located had been rented exclusively for a soccer team.

The girls, children of Muslim immigrant families living in Berlin, were visiting Poland to learn about the Holocaust. They visited sites in Lodz, Warsaw and Lublin.

An errant mortar shell fell in an open area in the northern Golan Heights yesterday, at the same time that Prime Minister Benjamin Netanyahu was in Katzrin at a ceremony marking the town’s 40th anniversary, the Jerusalem Post reports. An army spokesman said a Syrian military position fired the mortar.

This was the third day this week a mortar shells landed in the area, a result of  the fighting taking place between Syrian rebel forces and the army of Syrian President Bashar Assad.