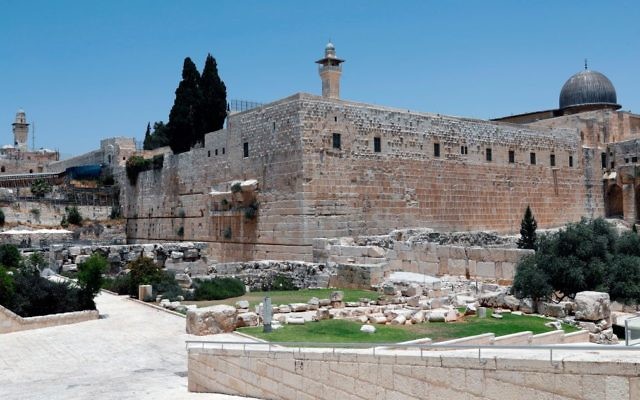 A picture taken on June 27, 2017 shows the right-part of the Western Wall with the dome of Al-Aqsa mosque seen on the right of the photo, taken from the archaeological site known as Robinson's Arch where renovations for the egal. section have started. The kotel bill was one point of contention between American Jews and the Israeli gov. this year. Getty Images

Jerry Silverman, head of the Jewish Federations of North America, said after a meeting yesterday with Prime Minister Benjamin Netanyahu that he and other leaders of Diaspora leaders are coordinating a challenge to the government’s reversal of a pluralistic prayer section at the Western Wall and a new conversion bill.

“We are the representatives of the entirety of the Jewish communities and I thought it important that he [Netanyahu] hear directly from the communities,” Silverman told the Times of Israel. “We are developing a strategy for a campaign to convince the Knesset and all Israelis as to the reasons why the Kotel [Western Wall] plan is so important.”

Read more on the fallout from the Knesset decision here and Gary Rosenblatt’s op-ed on the issue here.

The Jerusalem Post reports that State Department spokesperson Heather Nauert called those reports “just false. The President has made Israeli-Palestinian peace one of his top priorities.
“We understand and recognize that this is not going to be a one-shot deal,” Nauert said at a press conference. “It’s not going to be handled in one meeting or one trip. It is no surprise also that some meetings and conversations may be a little bit more difficult than others. Some will be more challenging. But we are not pulling out in any way, shape, or form of this as being one of our priorities.”

28-year prison term for attack on Jewish store in France

A French jihadist who threw a grenade at a Jewish store in Strasbourg in 2012 has been sentenced overnight to 28 years in prison, ynetnews.com reports. The court, which handed down the sentence against Jeremy Bailly, also sentenced eight others to prison for between 12 and 20 years.

Another member of the jihadist cell—Jeremie Louis-Sidney—died in a shootout with police when they tried to arrest him in Strasbourg in October 2012.

The grenade-attack at a Jewish food store in Sarcelles north of Paris the same year injured one person but killed nobody, an outcome prosecutors described as “a miracle”.

The Russian State Library will this month finish scanning and putting online the more than 4,500 books in its Schneerson Collection, which formerly belonged to the sixth Chabad-Lubavitch Rebbe Yosef Yitzchak Schneerson, the Times of Israel reports.

The holy texts had been passed down to his father, Rabbi Shalom DovBer Schneerson, by his grandfather and had belonged collectively to generations of Lubavitch chasidim going back to Rabbi Shneur Zalman of Liady, who began the collection in the 18th century.

For almost a century the books remained on the shelves of the Lenin public library in Moscow. “We have about 10 to 20 books left to scan. They’ll be on the site in a month,” said Svetlana Khvostova, the Russian State Library employee in charge of the Schneerson Collection at the Jewish Museum and Tolerance Center in Moscow.

Tom Bossert, President Trump’s homeland security adviser,  has announced a new cybersecurity partnership with Israel, according to ABC News. He said the new working group will focus on key cyber issues and encourage international cooperation, with the goal of “stopping adversaries in networks and identifying ways to hold bad actors responsible.”

Brandeis University has received a $50 million gift — the largest single donation in the suburban Boston school’s 69-year history — to provide financial aid annually for hundreds of students, JTA reports. The gift from the estate of Rosaline and Marcia Cohn announced yesterday by the university will establish the Jacob and Rosaline Cohn Endowed Scholarship and Fellowship Fund, providing assistance to undergraduate and graduate students.

Rosaline and Jacob Cohn, and their daughter Marcia, did not hold any formal connection to the university, but the family had given to Brandeis for decades, beginning with a $100 gift in 1956 from Rosaline and Jacob.

“Like many generous philanthropic families,” Brandeis President Ron Liebowitz said, “the Cohns were inspired by the very idea of Brandeis, a university founded by the Jewish community to be open to all students of talent, reflecting the Jewish values of reverence for academic excellence and dedication to using one’s talents to improve the world.”