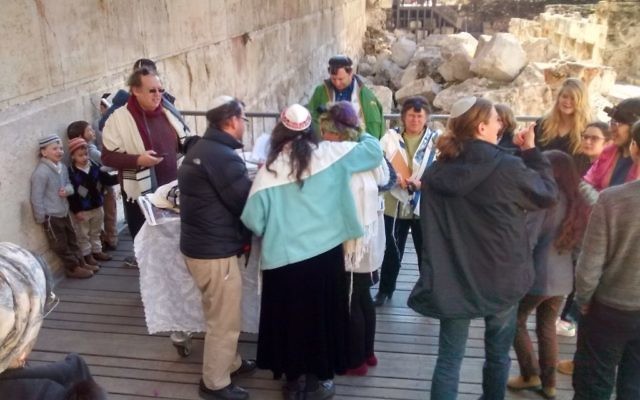 A family prays at Robinson's Arch, a section of the Western Wall that is designated for pluralistic prayer. A bill to expand the section was scrapped in the Knesset after pressure from hareidi parties. Michele Chabin/JW

The agreement, approved by the Israeli cabinet in January 2016, which would have established a separate area at the ancient Old City shrine, was backed by the Reform and Conservative movements, as well as the feminist Women of the Wall group. But the compromise was never put into effect.

Following yesterday’s decision, the Israeli  on Sunday, the government will seek to reach a new compromise on prayer at the Western Wall.

Three people carrying Jewish Pride flags were asked to leave the annual Chicago Dyke March on Saturday, Haaretz reports. The Chicago-based LGBTQ newspaper Windy City Times quoted a Dyke March collective member as saying the rainbow flag with the Star of David in the middle “made people feel unsafe,” and that the march was “pro-Palestinian” and “anti-Zionist.” 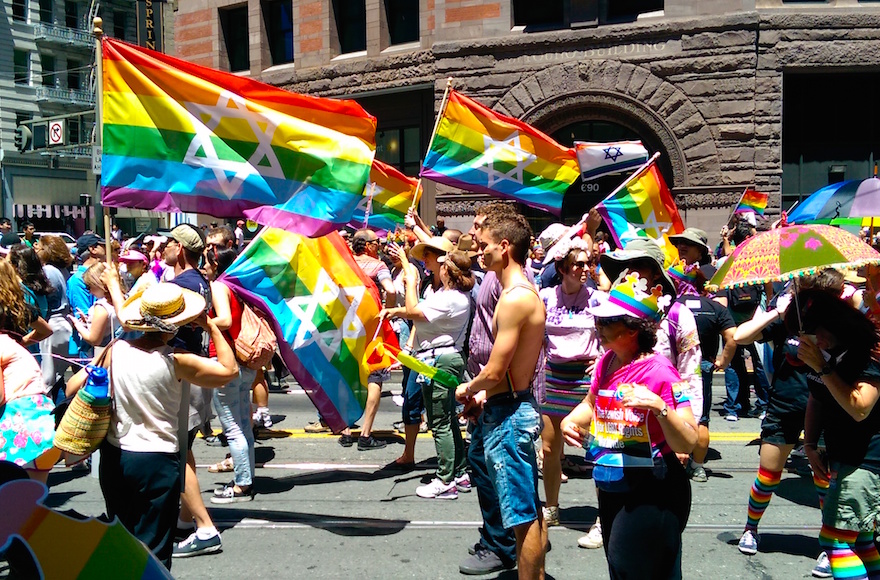 Marchers with the Jewish Pride flag participate in the San Francisco Pride Parade in 2014. JTA

The Chicago Dyke March is billed as an “anti-racist, anti-violent, volunteer-led, grassroots mobilization and celebration of dyke, queer, bisexual, and transgender resilience,” according to its Twitter account.

Laurel Grauer, a member of the Jewish LGBTQ organization A Wider Bridge, told the Windy City Times “it was a flag from my congregation which celebrates my queer, Jewish identity which I have done for over a decade marching in the Dyke March with the same flag.”

Gal Gadot, the Israeli star of the “Wonder Woman” film, has risen to No. 1 on The Hollywood Reporter’s Top Actors list, according to JTA. She had been ranked No. 4 on the list for the past two weeks on the ranking of the most popular actors on Facebook, Instagram, Twitter, YouTube and Google Plus. 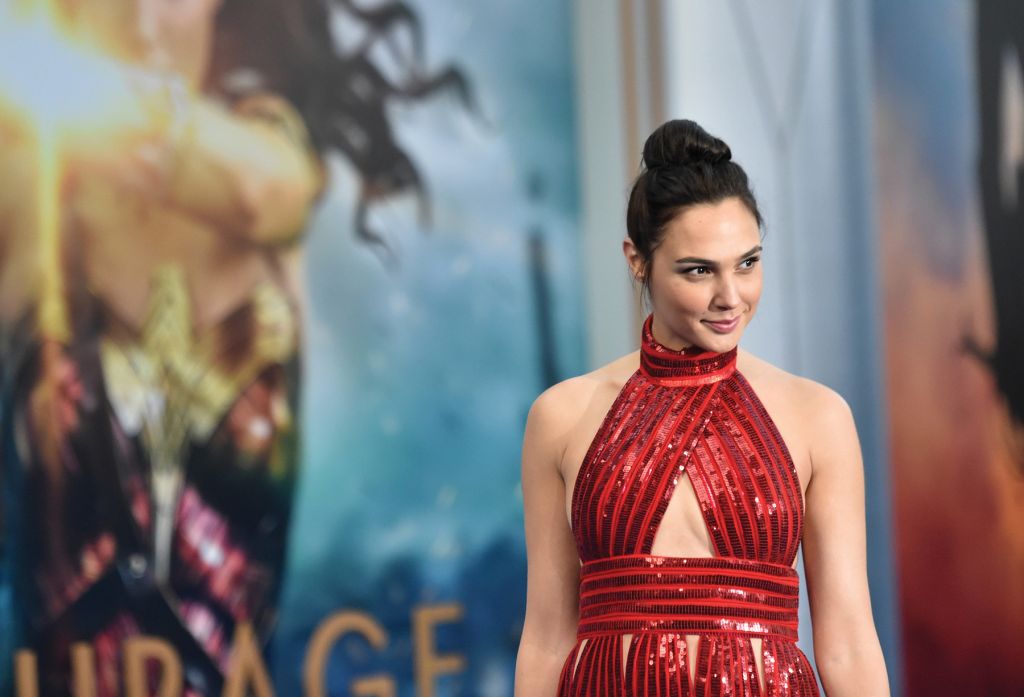 Gal Gadot, with her Wonder Woman persona behind her, at the film’s opening in Hollywood. She’s “a gift from heaven,” says an Israeli-American communal leader. Getty Images

Gadot, 32, has become an international sensation since “Wonder Woman” premiered. She has been a household name in Israel since winning the Miss Israel pageant in 2004, when she was 18 years old.

Rabbi Meir Zlotowitz, a founder of the ArtScroll/Mesorah publishing firm, which has become a staple in the Orthodox community, died on Saturday at 73, Hamodia reports.

Ordained by the late Rabbi Moshe Feinstein, leader of the non-chasidic segment of the charedi community, Rabbi Zlotowitz, who served four decades ago as director of a high-end graphics studio here, in 1975 wrote an English translation and commentary on the Scroll of Esther to honor a friend who had died. The book’s first edition of 20,000 copies sold out within two months, leading to hundreds of books in Hebrew, English and other languages on the Torah, Talmud and other Jewish subjects.

In its first 25 years, ArtScroll produced more than 700 books, including novels, history books, children’s books and secular textbooks, and is now one of the largest publishers of Jewish books in the United States.

Yair Lapid, the chairman of Israel’s Yesh Atid party, has sent a hard-hitting letter to Berlin’s mayor Michael Müller for permitting Hezbollah—an organization proscribed as a terrorist entity by many countries—to march in Berlin last Friday, the Jerusalem Post reports.

“This past week a lecture by a Knesset Member from Yesh Atid [Aliza Lavie] was violently disrupted by radical anti-Israel activists at a university in Berlin. A few days later demonstrators marched through your city proudly displaying photographs of the leader of an anti-Semitic terrorist organization,” Lapid wrote. “As the son of a Holocaust survivor I was deeply disturbed that in the same week that a group of Jews are targeted, antisemites are given the freedom of the city. We have stood in solidarity with Germany when you were hit by brutal terror attacks. We did that because we identified deeply with the pain caused by terrorism and we wanted to express our support for the people of you city.”

Alon Day, the first Israeli driver to compete in the Monster Energy NASCAR Cup Series, the sport’s highest league of competition, finished 32nd out of 40 at the Sonoma Raceway in Southern California yesterday, in his first race at the level, the Times of Israel reports. 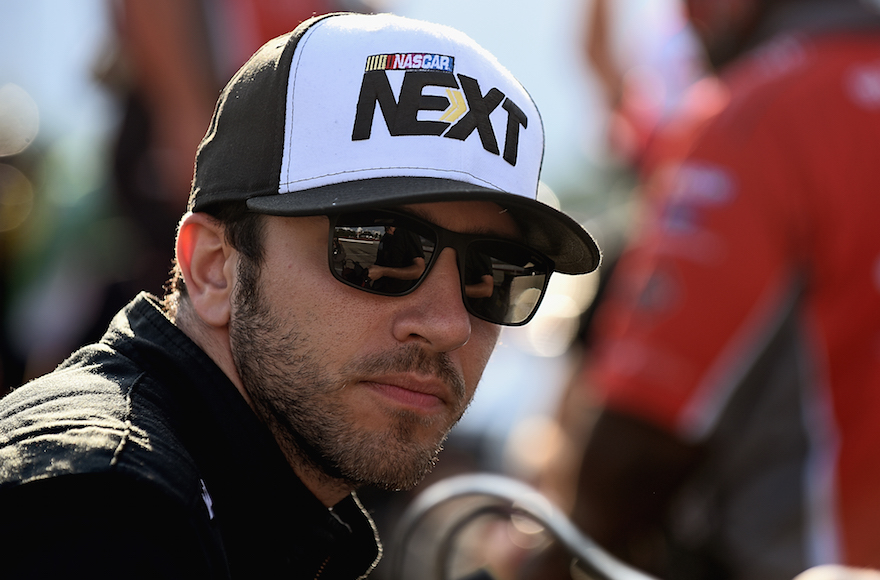 Alon Day sitting next to his car during qualifying for the NASCAR Xfinity Series’ 4th Annual Mid-Ohio Challenge in Lexington, Aug. 12, 2016. JTA

Day grew up in Ashdod, where he learned about NASCAR from playing video games such as Grand Prix Legends. He is 25; Alon was named Israel’s “Athlete of the Year” in 2016.

A Brooklyn man died three weeks after a hospital declared him dead against the wishes of his Orthodox Jewish family.

According to the New York Post, Nakar had a stroke after being admitted to the hospital. Doctors at the hospital declared him brain dead on May 31, during the Jewish holiday of Shavuot, and issued an electronic death certificate. He was then transferred, on life support, to Maimonides Medical Center.

For religious reasons, Nakar’s wife, Sarah, objected to her husband being taken off life support. She filed a lawsuit against the hospital asking the court to rescind the death certificate so she could file insurance claims for his treatment.

No ruling on the lawsuit was made before Nakar’s death.