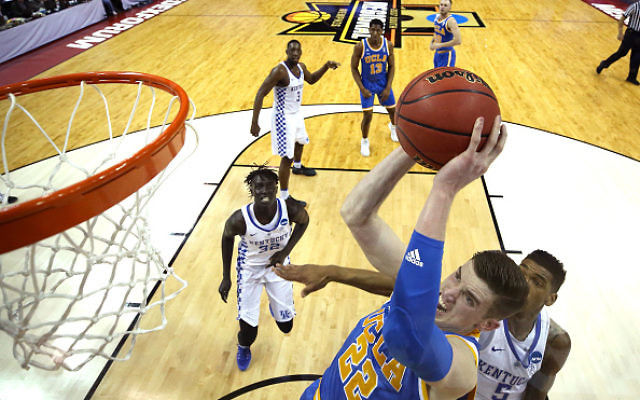 TJ Leaf of the UCLA Bruins goes up with the ball against Malik Monk #5 of the Kentucky Wildcats in the first half during the 2017 NCAA Men's Basketball Tournament South Regional at FedExForum on March 24, 2017 in Memphis, Tennessee. Getty Images

Tel Aviv born T.J. Leaf, a player on the UCLA basketball team, was picked yesterday by the Indiana Pacers in the first round of the NBA draft, becoming the third Israeli to make it to basketball’s big leagues in this country, the Times of Israel reports. Leaf was selected No.18 in the first round of the draft, leaving UCLA after one year, where the power-forward was overshadowed by superstar Lonzo Ball despite leading the Bruins in scoring.

Leaf, who reportedly is not Jewish, was born in Tel Aviv and lived there the first two years of his life while his father Brad Leaf, who was also drafted by the Pacers in 1982 but never joined the team, played in the Israeli premier league. Brad Leaf spent 17 years in Israel, playing for Maccabi and Galil Elyon and winning the league MVP award once.

In 2015, T.J. Leaf played for the Israel national Under-19 team, an experience he said helped mature him.

Rabbi Rick Jacobs, president of the Union for Reform Judaism, has  warned of a new crisis between Israel and large segments of the U.S. Jewish community if the Israeli government backtracks on its commitment to create an egalitarian prayer area at Jerusalem’s Western Wall, according to Haaretz. 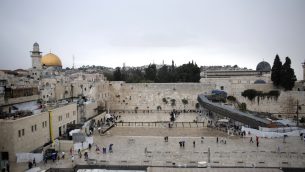 Jacobs said that while such reports were “deeply alarming,” they were “sadly, not surprising.” He told Haaretz  that supporters of the agreement, which was crafted in early 2016 but hasn’t yet been implemented, have gotten used to seemingly “endless delays.”

Rabbi Jacobs says that when a delegation from his movement visited Israel earlier this year and met with Prime Minister Netanyahu, the Israeli leader and his advisers explained that there are coalition complications that make it hard to move forward with the plan.

A book called “A History of the Palestinian People: From Ancient Times to the Modern Era” that went on sale on Amazon last week was the most sold book in the site’s “Israel & Palestine History” category and the 543rd most sold book on the site, Israeli media reports.

The website page for the book, which contains 132 blank pages, has since been removed from the site. It was not immediately clear if the page was removed by Amazon or the publisher.

A bipartisan bill introduced in the U.S. House of Representatives and named for the late Elie Wiesel aims to improve the U.S. response to emerging or potential genocides. JTA reports.The Elie Wiesel Genocide and Atrocities Prevention Act of 2017 serves to improve U.S. efforts to prevent major casualties overseas. 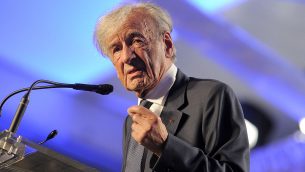 Elie Wiesel speaks during a celebration of the U.S. Holocaust Memorial Museum’s 20th anniversary in 2013. Getty

Reps. Joe Crowley (D-N.Y.) and Ann Wagner (R-Mo.) introduced the measure named for the Holocaust survivor and Nobel laureate. It ensures that the official policy of the United States deems the prevention of genocide and other crimes a matter of national security interest.

The act would also establish an interagency Mass Atrocities Task Force and encourage the director of national intelligence to include information on atrocities in the annual crime report to Congress. It also enables training for U.S. Foreign Service officers on detecting early signs of atrocities.

No staffing for Anti-Semitism monitoring office

The State Department’s office to monitor and combat anti-Semitism will be unstaffed as of July 1, JTA reports. A source familiar with the office’s workings told JTA that its remaining two staffers, each working half-time or less, would be reassigned as of that date.

The Trump administration, which has yet to name an envoy to head the office, would not comment on the staffing change. At full staffing, the office employs a full-time envoy and the equivalent of three full-time staffers.