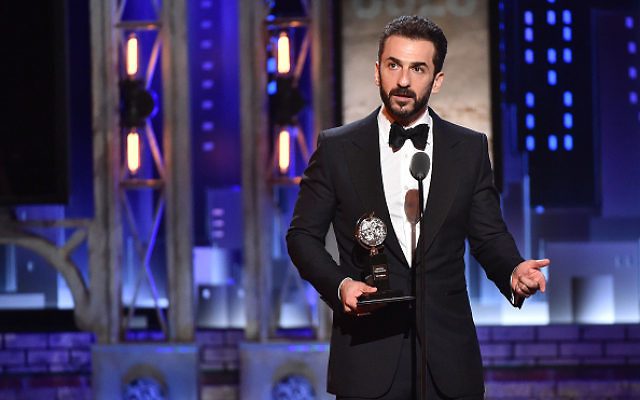 Michael Aronov accepts the award for Best Performance by an Actor in a Featured Role in a Play for Oslo onstage during the 2017 Tony Awards at Radio City Music Hall on June 11, 2017 in New York City. Getty Images

Play about Middle East peace talks wins Tony
“Oslo,” J.T. Rogers’ play about the 1993 Middle East peace negotiations between Israel and the Palestinians, was named best new play in New York yesterday at the Tony Awards ceremony. Michael Aronov of “Oslo” was a surprise winner in the featured actor category for his performance as an Israeli negotiator.

This surprising story, and the unlikely married couple behind it, Mona Juul and her husband, Terje Rød Larsen, the Norwegian instigators and orchestrators of the talks are the subject of “Oslo,” which premiered off-Broadway in June 2016 before opening on Broadway in April.

Nearly 20,000 Orthodox Jews gathered at Brooklyn’s Barclays Center basketball arena yesterday to protest an Israeli law that mandates Orthodox conscription into the army, which they described as “Israel’s persecution of religious Jews,” the Jerusalem Post reports. Rabbi David Niederman, liaison for the Central Rabbinical Congress, one of rally’s organizers, called Orthodox conscription a violation of religious freedom.
“Since 1948, when the government was founded, they understood that there is such a thing as [yeshiva] students who are studying and they are exempt of military services,” he said. “But for the past few years [Israeli politicians] have been trying to tighten the screw, and basically forcefully recruiting and forcefully bringing them in for military service, to which they object.”

The rally, almost entirely in Yiddish, took place amid unrest in ultra-Orthodox neighborhoods of Jerusalem, where violent protests have erupted in the past months, over the same issue.

Panorama of crowd at #LetOurPplGoRally against IDF draft at @barclayscenter pic.twitter.com/DqnaMlPKTC

The synagogues were all closed around 8 a.m. on Saturday and cleared to reopen by about 12:45 p.m., the Los Angeles Police Department said. The LAPD used K9 units to check the buildings for bombs. No explosives were found at any of the locations.

No increased funding for Holocaust museum
Members of Congress and the Anti-Defamation League have criticized President Trump’s budget proposal that denies a funding increase request by the United States Holocaust Memorial Museum, according to JTA. A bipartisan group of 64 lawmakers signed a letter asking Trump not to reject the $3 million funding increase request, The Hill.
“In our view, the mission of the museum has never been more important, particularly as the number of anti-Semitic attacks around the world rises,” read the letter, which was spearheaded by Reps. Stephanie Murphy, D-Fla., Carlos Curbelo R-Fla., John Katko, R-N.Y. and Kyrsten Sinema D-Ariz.

The museum had requested a funding increase of $3 million from the 2016 allocation in order to cover rising costs, maintenance, equipment support and security. Trump’s new budget would deny that request, keeping the budget at the 2016 level of $54 million instead of the requested $57 million, according to The Hill.

Jerusalem court rules against Beit Shemesh policy
A Jerusalem District Court has decided to hold the Beit Shemesh municipality in contempt after it took no action to remove signs to exclude women from the public sphere, Israeli media reports. According to the ruling, the municipality will be forced to pay 5,000 shekels (about $1,400) per sign for every day it remains on display starting next month.

Five women, all Orthodox religious residents of the city, sought to have the municipality remove the signs placed at the entrance to charedi neighborhoods in the city that included demands to dress modestly according to specific details of what constitutes acceptable attire, and signs that warned women not to use streets where synagogues and yeshivas are present. The women described harassment and violence directed at them from charedi extremists that were connected to the messages on the signs on several occasions.