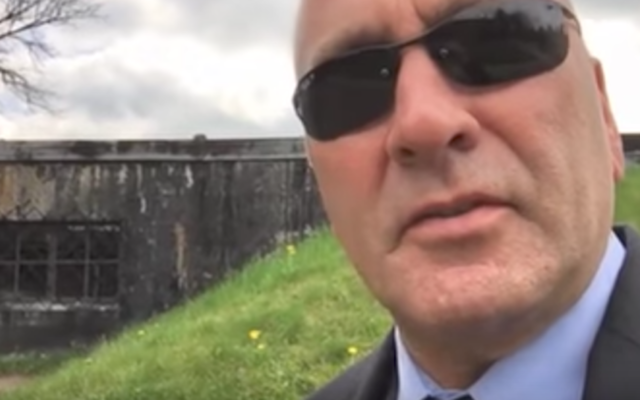 A Louisiana congressman yesterday removed and apologized for a video he filmed at Auschwitz that compared the threats posed to Jews during the Holocaust to those facing the United States today, JTA reports. “I filmed the Auschwitz message with great humility,” Rep. Clay Higgins said in a statement. “My Auschwitz video has been removed, and my sincere apology for any unintended pain is extended.”

The Auschwitz-Birkenau Memorial and Museum and several Jewish organizations had criticized Higgins for filming inside a former gas chamber, including a tweet that featured a picture of a plaque that reads “You are in a building where the SS murdered thousands of people. Please maintain silence here: remember their suffering and show respect for their memory.”

In his statement to JTA, Higgins said “My intent was to offer a reverent homage to those who were murdered in Auschwitz and to remind the world that evil exists, that free nations must remember, and stand strong. However, my message has caused pain to some whom I love and respect.”

Higgins, who was elected last year and is on the House Homeland Security Committee, removed the video from his Facebook page, but it still appears on the Times-Picayune website.

A 3-month-old boy from a Chasidic family died yesterday of injuries he suffered during a recent traffic accident when a driver plowed into his family walking along the Route 59 shoulder in the heavily congested commercial district near Robert Pitt Drive, according to the Journal-News. The baby died at Westchester Medical Center, where he and his mother and two older sisters had been treated since the June 26 incident.

Poland’s Jewish community leaders said yesterday that they “deeply regret” that President Trump has no plans to see the Warsaw Ghetto memorial during his visit to the capital today, the Times of Israel reports.

“We trust that this slight does not reflect the attitudes and feelings of the American people,” said the statement released by Poland’s chief rabbi Michael Schudrich, Jewish Community of Warsaw president Anna Chipczynska and Leslaw Piszewski, president of the Union of Jewish Communities of Poland. 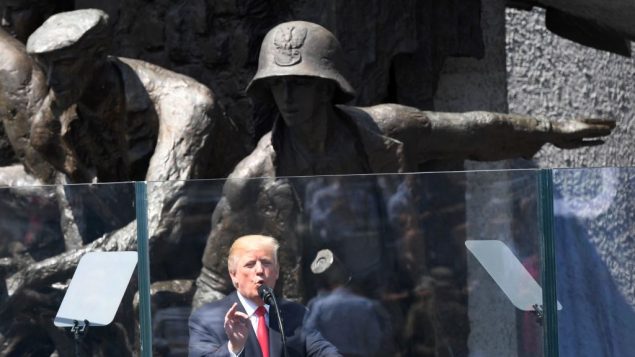 US President Donald Trump gives a speech in front of the Warsaw Uprising Monument on Krasinski Square on the sidelines of the Three Seas Initiative Summit in Warsaw, Poland, July 6, 2017. Getty Images

They said the omission of a visit to the memorial — which is dedicated to the victims of the 1943 Warsaw Ghetto Uprising, when Jewish partisans took up arms against Nazi German forces in a doomed revolt — on Trump’s official schedule marks a break in tradition. “We deeply regret that President Donald Trump, though speaking in public barely a mile away from the Monument, chose to break with that laudable tradition, alongside so many other ones.”

Trump is in Poland before continuing on to his first G20 summit in Hamburg. He is to deliver a speech at Warsaw’s historic Krasinski Square today and meet with Baltic, Balkan and central European leaders.

Firefighters from across London yesterday battled a huge fire at an Orthodox day school in the city’s Hackney neighborhood, the London Jewish Chronicle reports. London Fire Brigade officials said half of the basement and ground floor of the Belz kindergarten burned, as well as other areas of the four-story building.

The cause of the fire is under investigation but a Metropolitan Police source said it was believed to have been started by an electrical fault. Another source said the fire started in the boiler room. There were no reported injuries.

A 37-year-old Israeli woman named Danielle Layman has been arrested by the FBI on suspicion of attempting to hire an assassin to murder her ex-husband—a Tel Aviv taxi driver—by using homemade ricin, ynetnews.com reports. According to court documents from the U.S., Layman and her ex-husband are currently engaged in a bitter custody dispute over their daughter.

Layman reportedly had placed a Craigslist ad seeking someone to work on a production abroad. The ad also promised competitive pay, while demanding strict discretion.

The 11-year-old son of Chabad emissaries who were murdered in a 2008 jihadist rampage in Mumbai told visiting Indian Prime Minister Narendra Modi yesterday that he loves India and wants to return to complete the mission of his slain parents, during an emotional meeting, the Times of Israel reports.

Modi, during a historic visit to Israel, met with Moshe Holtzberg, pulling the boy close for an embrace and telling him that he would always be welcome in India. Moshe’s nanny, Sandra Samuel, escaped from the Nariman Chabad House carrying 2-year-old Moshe in November 2008 after the building came under siege. Four Jewish victims were killed, including Moshe’s parents, Rabbi Gavriel and Rivka Holtzberg. Samuel has remained in Israel and was at the meeting as well.

The boy, wearing a lapel pin with Indian and Israeli flags, read out a message in halting English, telling Modi, “I hope I will be able to visit Mumbai, and when I get older, live there. I will be the director of our Chabad House” in place of his murdered father. “With God’s help, this is my answer.”

A joint exercise between Israeli and Palestinian rescue and security forces took place yesterday at a crossing near the West Bank Palestinian city of Jenin, ynetnews.com reports. The drill was conducted on the initiative of the Israeli Civil Administration, simulating a vehicular crash situation.

During the exercise, the teams rushed to the upturned cars and began sawing them open while trying to avoid causing any damage to the dummies “trapped” inside.

Artists call for boycott of Grossman play at Lincoln Center

More than 60 artists, including four Pulitzer Prize winners and other prominent writers, actors, directors and playwrights, have signed an open letter calling on Lincoln Center to cancel performances of a play co-produced by two Israeli theater companies and backed by the Israeli government, according to Haaretz.

The play, “To the End of the Land,” is produced by the Cameri Theater of Tel Aviv and Ha’Bima National Theater of Israel, based on a critically acclaimed 2008 novel by David Grossman about a mother who tries to escape from her worry over her son’s military service by going on a hike in the Galilee.

The play, part of the Lincoln Center Festival, is being presented July 24-27 “with support of Israel’s Office of Cultural Affairs in North America,” according to a news release.

Isaac Herzog, who this week lost an election to retain his leadership position in the Labor party, will remain opposition leader if candidate Avi Gabbay wins next week’s runoff, Gabbay announced today. 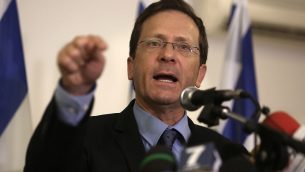 Gabbay cannot be opposition leader, because he is not a member of Knesset.

“The job of opposition leader isn’t a currency to sell,” the Jerusalem Post quoted Gabbay as saying. “It is fair and in our interest for Herzog to continue in the job, and I will be happy if he agrees to it.”