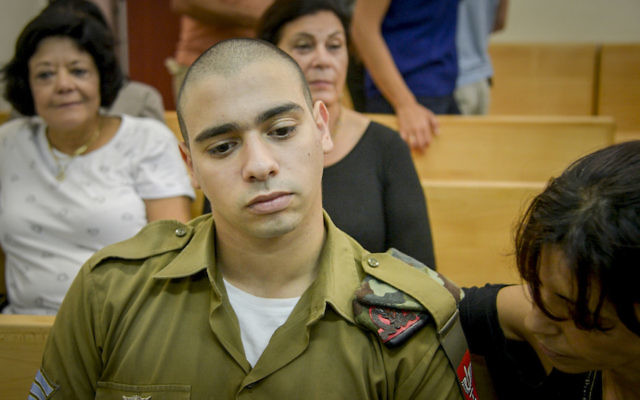 A district-level military court had found Azaria, who recently completed his military service, guilty of manslaughter for killing an incapacitated Palestinian stabber, Abdel Fattah al-Sharif, who had attacked two soldiers with a knife 11 minutes earlier, in the West Bank city of Hebron, on March 24, 2016.

Azaria defended his actions, claiming he shot at al-Sharif in a snap decision, believing the attacker, who he claimed was slightly moving, may have been armed with a hidden explosives vest or could have lunged for his knife

Two New Jersey men convicted in the firebombing of North Jersey synagogues in 2011 and 2012 were each sentenced to 35 years in prison, the Jerusalem Post reports. Anthony Graziano and Aakash Dalal were charged on a 30-count indictment in 2013 with arson and bias-related incidents that occurred from December 2011 to January 2012 in the Bergen County towns of Paramus, Rutherford, Maywood and Hackensack.

Dalal was convicted last November for vandalizing and firebombing synagogues and a rabbi’s home in 2012. Graziano, his former high school classmate, also was found guilty of terrorism and 19 other counts in May 2016 for the attacks.

“Transparent,” the groundbreaking Amazon series about a dysfunctional Jewish family with a transgender parent, will be coming to Israel this fall in its fourth season.

The trailer, released on Saturday, indicates that the program will accompany Maura Pfefferman (Jeffrey Tambor) and family as they stroll through Jerusalem’s Old City, ride camels in the desert, float in the Dead Sea, and cross through a West Bank checkpoint.

Transparent” tells the story of Mort Pfefferman, played by Tambor, a retired college professor in his late 60s who publicly transitions from male to female.

A Scottish man is on trial for allegedly stirring up hatred, after causing outrage in a video in which he taught his dog to make a Nazi salute and respond to the phrase “gas the Jews,” the Times of Israel reports. Prosecutors said Mark Meechan’s clip, “anti-Semitic in nature, remained available online and was receiving thousands of new views every day.

The Argentine Foreign Ministry has delivered a series of documents about World War II, some of them related to Nazi war criminals, to the U.S. Holocaust Memorial Museum in Washington, the Jerusalem Post reports. The digital copies of the documents delivered are mainly letters, telegrams, newspaper articles, notes and reports, totaling almost 40,000 documents.

Argentina was a refuge for Nazis after World War II.

The Sunday Times has apologized for a column on BBC women’s pay in its Irish edition that highlighted anchors Claudia Winkleman and Vanessa Feltz, who are Jewish, and suggested that “Jews are not generally noted for their insistence on selling their talent for the lowest possible price”.

Sheikh Ammar Shahin of the Islamic Center of Davis, in northern California, who had prayed that Allah“liberate the Al-Aqsa Mosque from the filth of the Jews” and“annihilate them down to the very last one,” has apologized for his incendiary recent sermon.

The Jewish Press reports that the imam, during a press conference with religious and community leaders, “I said things that were hurtful to Jews. This was unacceptable. I am deeply sorry for the pain I have caused. The last thing that I would do is intentionally hurt anyone, Muslim, Jewish or otherwise. It is not in my heart.”