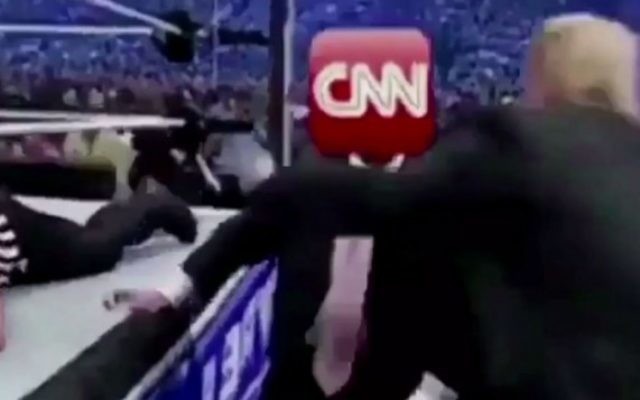 In video tweeted by the US president on July 2, 2017, Donald Trump appears to attack the CNN news network. (Screen capture: Twitter)

An user of an alt-right forum on the social news site Reddit who has posted anti-Semitic, anti-Muslim and racist items has claimed credit for a controversial video tweeted yesterday by President Trump, the Times of Israel reports. The clip shows Trump wrestling to the ground and beating a “villain” whose face is covered by a CNN logo.

The user, whose name has not become public, operates under a screen name that is a vulgar corruption of “Han Solo.” His earlier posts were heavily aligned with the Alt-Right and white nationalists movements, and included anti-Jewish and anti-Muslim content.

After Trump’s tweet yesterday, the user wrote “Wow!! I never expected my meme to be retweeted by the God Emperor himself!!!”

Vandals yesterday defaced a Holocaust memorial at a Lakewood, N.J., synagogue, CNN reports. The vandalism was in the form of a banner that featured “inflammatory language aimed at people of the Jewish faith,” CNN quoted a Lakewood Township Police Department spokesman as saying.

The vandalism comes after anti-Semitic fliers were recently posted throughout the city. Both the banner and the fliers had links to a website run by a white nationalist group notorious for racist and bigoted campaigns against racial, ethnic and religious minorities in the United States.

American pop icon Britney Spears was mobbed yesterday by fans during a visit to the Western Wall, JTA reports. Spears, who is scheduled to perform today at Yarkon Park in Tel Aviv, on her first visit to Israel, visited the Kotel, then reportedly cancelled a scheduled meeting with Prime Minister Benjamin Netanyahu.

The concert is part of Spears’ summer Asian tour promoting her album “Glory,” which was released last year. It is her first tour outside the U.S. since 2011.

Qatar has become the third Arab-majority country to ban the screening of the movie “Wonder Woman” because lead actress Gal Gadot is Israeli, according to the Jerusalem Post. The film had been scheduled to premiere in Qatar Thursday and was being promoted by local theater chains VOX Cinemas Qatar and Novo Cinemas, but was removed from cinema websites.

The film currently is banned in Lebanon and Tunisia.

A controversial Australian rabbi who was caught intimidating and vilifying victims of child sexual abuse will head a Melbourne school, the city’s Herald Sun reports. In a move that has “devastated victims of sexual abuse,” Rabbi Meir Shlomo Kluwgant has been appointed as principal of the Adass Israel School.

He was forced to resign as “Australia’s top rabbi” amid a “humiliating scandal” in the wake of a national child abuse probe in 2015, according to the paper.

In 2008 the school’s committee helped principal Malka Leifer flee Melbourne after she was publicly accused of sexually assaulting students.

Plans to expand Jewish neighborhoods in East Jerusalem and build housing for Jews in an Arab neighborhood of the capital – where five Palestinian families would be evicted – will come before the Jerusalem District Planning Commission in the next two weeks, Haaretz reports.

The plans include 2,000 homes in large Jewish neighborhoods and four plans for Jewish housing in Sheikh Jarrah, just north of the Old City no Palestinians forced out of the neighborhood.