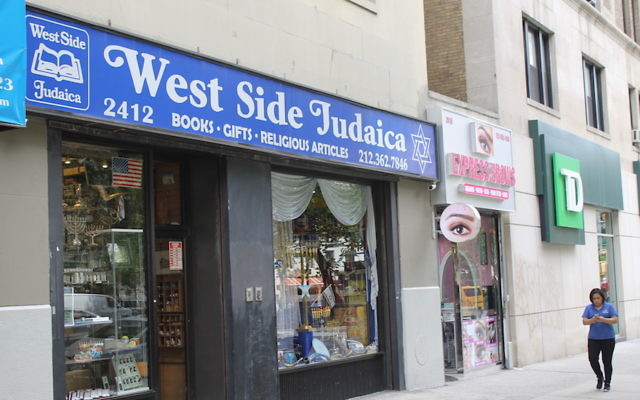 West Side Judaica, which has sold Jewish books and ritual objects in the heavily Jewish neighborhood of Manhattan’s Upper West Side for more than eight decades, expects to close at the end of the calendar year. JTA

West Side Judaica to close, leaving only one Judaica store left in Manhattan

West Side Judaica, one of two Jewish bookstore-gift shops in Manhattan, will close its doors soon because of increasing competition from the Internet and a recent rent hike, owner Yaakov Seltzer told JTA. When it shutters, after 83 years in operation, only one Jewish bookstore, J. Levine Books and Judaica in midtown, will remain in the borough.

“The new generation doesn’t support us,” Seltzer said. “They don’t know us personally because they use online [stores]. They don’t feel obligated.”

Seltzer said he made the decision to close after an automatic rent increase in his lease that kicked in three months ago made the business unprofitable. “It’s an online world,” Seltzer said. “There’s no way I can pay $24,000 a month in rent and compete with someone online who’s selling without any of my expenses.”

Anti-Semitic fliers, linked to a white supremacist group, have been posted on Houston-area synagogues, the city’s Jewish Herald-Voice reports. The materials, found taped to signs, doors and gates on the properties of at least two synagogues, were reported to law enforcement and the Southwest Region office of the Anti-Defamation League.

The ADL said the group believed to be behind the threats – Vanguard America – recently launched a national campaign to distribute racist and anti-Semitic materials. “Intimidation appears to be one of their motives,” said Dena Marks, associate director of ADL’s Southwest Region office.

Prior to the threats against Houston synagogues, Vanguard America claimed responsibility for posting racist and anti-Semitic materials on a freeway overpass in Austin, at a pair of synagogues in Shreveport, La., and at a Holocaust memorial in Lakewood, N.J.

Twenty-six Jews from Venezuela immigrated to Israel this week, part of a general surge in emigration from the country as its political and economic crises have paralyzed parts of the nation, the Jerusalem Post reports.

On July 30, Venezuelan President Nicolas Maduro is holding a vote to create a legislative super-body that would have the power to rewrite the constitution and dissolve state institutions.

Several of the families who have made aliyah were in “severe economic distress,” the Post reports. An estimated 5,000-9,000 Jews remain in Venezuela, among them 1,400 elderly and some 500 children.

The Jewish community of the United Kingdom recorded 767 anti-Semitic attacks in the first half of 2017 — the highest figure recorded within six months since monitoring began in 1984, according to JTA. The total number of incidents recorded from Jan. 1 to July 1 by the Community Security Trust, British Jewry’s watchdog on anti-Semitism, constitute an increase of 30 percent from the 589 incidents from the same time period of 2016. 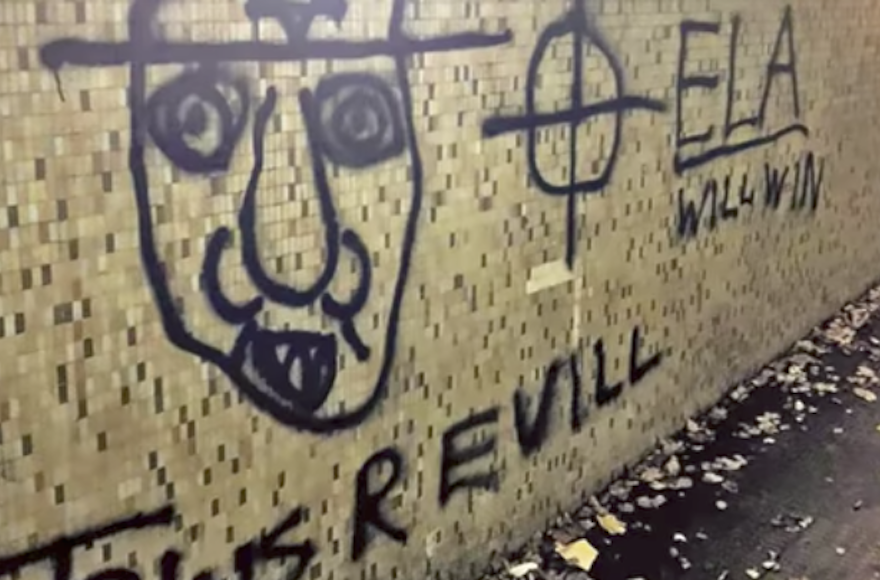 Graffiti found in the Sussex county of England last November. The number of anti-Semitic incidents in England in the first half of this year is the highest ever recorded in a six-month period. JTA

CST has recorded 80 violent assaults in 2017, a 78 percent rise from the 45 over the first six months of 2016 and the highest number CST has ever recorded for the January to July period. In one incident, unidentified individuals threw a brick with the word “Jew” and a swastika painted on it into the home of a Jewish family in the London borough of Edgware on Shabbat.

Nearly half of the incidents recorded by CST in 2017, or 351 cases, involved verbal abuse directed at individual Jews.

Jewish groups have asked Homeland Security and the U.S. Attorney General’s office to investigate a California imam who gave a recent sermon calling on Allah to “annihilate” Jews “down to the very last one” — and asked for his congregants to take part in the slaughter, according to Fox News.

In a subsequent statement on its website, the Islamic Center said it stood behind Shahin and his sermon, and that the imam’s words were taken out of context. “The ICD will always stand against anti-Semitism similarly to how the Jewish community has always stood against Islamophobia in our close knit community. We have zero tolerance for anti-Semitism or any other form of bigotry.”

The Simon Wiesenthal Center called upon the Department of Homeland Security to launch an investigation of the Imam for “inciting to murder Jews.”