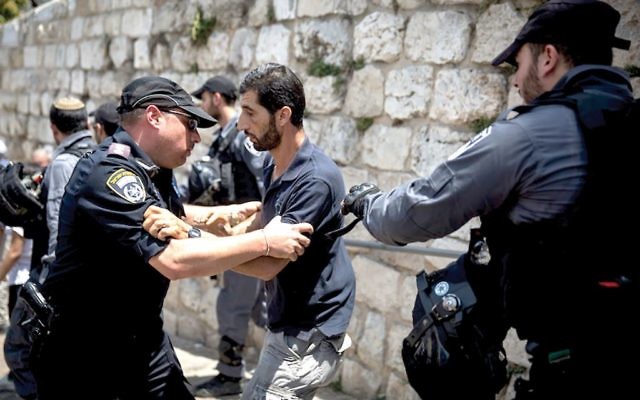 Israeli police trying to clear Muslim worshippers from the area of the Lions’ Gate this past week after they performed their noon prayers outside the Temple Mount. JTA

Israeli security officials are bracing for more Arab violence on the Temple Mount today following a cabinet decision that authorizes police to screen Muslim worshipers with metal detectors and take any other steps they consider necessary to ensure free access to the area, the Jerusalem Post reports.

The situation was tense last night, with Muslims throwing stones and glass bottles at officers as they left evening prayers outside the Old City’s Lions’ Gate. Two Palestinians were reportedly killed in the clashes.

Police also decided to restrict the entrance to the Temple Mount compound to the age of 50 and above, following recent anti-Israel unrest on the Temple Mount; and the area of the Old City and the adjacent streets, including Sultan Souliman Street, will be closed to traffic.

Dozens of Turkish protesters gathered yesterday near the Nave Shalom synagogue in Istanbul to protest the new security measures Israel had implemented on Temple Mount, according to Israeli media. The protestors threw stones at the building and kicked at its doors, as they warned that “the Zionists must get their act straight or else we will return.”

An Israeli expatriate family of five from Brooklyn were recently removed from a JetBlue flight in Florida, with the reason in dispute, JTA reports. Tamir Raanan and his wife, Mandy Ifrah, were ready to fly home with their three children from Fort Lauderdale when their 1-year-old daughter kicked the seat of the passenger in front of her, according to yesterday’s story.

Ifrah said she apologized to the woman, who advised Ifrah to tie her child’s feet before switching seats. An airline spokesman said that after “a verbal altercation that included physical threats,” the family was asked to deplane. A member of the JetBlue staff told the couple that they would receive a refund for the flight.

The family is Jewish and the couple are expatriate Israelis.

The family stayed in a hotel overnight after buying extra diapers, wipes and children’s clothes. They flew back to New York on a different airline, discovering upon arrival that their luggage had been sent back to Florida. They had to pay to have it returned to them, according to reports.

A spreading famine in Uganda is posing a threat to the African country’s 2,000-member Jewish community, the Abayudaya, JTA reports.

“People look dehydrated and starving,” said Gershom Sizomu, the community’s rabbi. “People got sick and weak, and there are people who died because of complications because of the food shortage. People were already sick, so without food they become weaker and weaker.” Two community members who already were sick have died of malnutrition.

Stephen O’Brien, emergency relief coordinator for the United Nations, has said that 20 million people across Africa and the Middle East are at risk of illness and death due to a famine that is centered in Somalia, Nigeria, Yemen and South Sudan.

Two community members who already were sick reportedly died of malnutrition. More on the story here.

Allowing BDS proponent Roger Waters to perform at a Long Island arena is a violation of a local law that bans the anti-Israel Boycott, Divestment and Sanctions BDS) movement, says Howard Kopel, a member of the Nassau County Legislature, JTA reports. Waters, the former Pink Floyd frontman, is scheduled to appear at the Nassau Coliseum on Sept. 15 and 16.

Kopel has asked the county attorney to determine whether the Nassau Coliseum lease requires compliance with the county law adopted in May 2016 that prevents the county from doing business with any company that participates in the economic boycott of Israel. 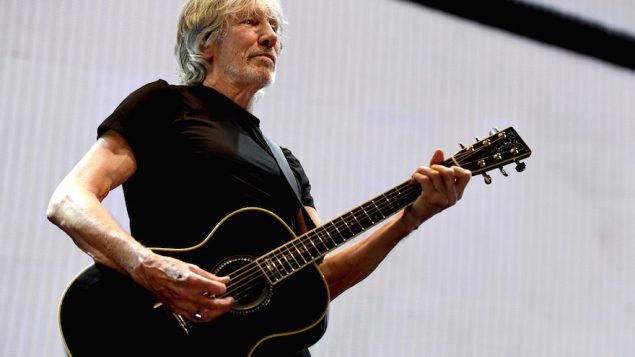 Musician Roger Waters performs during his Us + Them Tour at Staples Center on June 20, 2017 in Los Angeles, California. JTA

A monument in honor of the SS Exodus, the ship that brought Holocaust survivors to Israel 70 years ago and captured the world’s imagination, was dedicated this week at the Haifa port, the Jerusalem Post reports. The first-such memorial was spearheaded by the Jewish American Society for Historic Preservation.

Sculptor Sam Philipe created an anchor, on the base of which is an outline of the map of Israel.

Among the hundreds of people present at the dedication ceremony – many of them Holocaust survivors – were some 150 who had first come to Haifa on the Exodus.

A prominent rabbi from Russia has condemned a ruling by a court in the Black Sea coastal city of Sochi that blacklists and labeled extremist a book by a 19th-century rabbi, the Times of Israel reports. Rabbi Boruch Gorin, a senior aide to Russian Chief Rabbi Berel Lazar, called “absurd” the ruling by a district court to classify as extremist the book “Forcibly Baptized” by Rabbi Marcus Lehmann.

The novel, which deals with a Jew’s determination to retain his faith despite external pressures to renounce it, was added to the federal list of extremist materials of the Ministry of Justice of Russia.

Rabbi Gorin called the ruling “a mockery of justice,” and suggested that it was part of a judicial policy in Sochi to limit the growth of Jewish spiritual life.

The American Civil Liberties Union has called on U.S. senators to oppose a measure that opposes boycotts of Israel and its settlements, JTA reports. The Israel Anti-Boycott Act, introduced in March by Sens. Ben Cardin (D-Md.) and Rob Portman (R-Ohio), would expand 1970s-era laws that make illegal compliance with boycotts of Israel sponsored by governments to include boycotts backed by international organizations. Those adhering to boycotts would be the subject of fines.

While the measure is aimed at the Boycott, Divestment and Sanctions movement, it also targets efforts by the United Nations and the European Union to distinguish products manufactured in Israel from those manufactured in West Bank settlements.

In a letter, the ACLU stated that “We take no position for or against the effort to boycott Israel or any foreign country, for that matter. However, we do assert that the government cannot, consistent with the First Amendment, punish U.S. persons based solely on their expressed political beliefs.”

A Montreal judge has issued an arrest warrant for an imam who allegedly used his pulpit at a city mosque to call for the slaughter of Jews, according to JTA. Sheikh Muhammad ibn Musa Al Nasr was charged with willful promotion of hatred, according to the Montreal Police Service’s Hate Crimes Unit.

Al Nasr’s current location is unknown, but it reportedly may be in his native Jordan, according to JTA. B’nai Brith is seeking his extradition to Canada.

Members of Congregation B’nai Abraham in Hagerstown, near Washington D.C., are supporting the establishment of a park across from the synagogue to honor Thomas Kennedy, a Washington County state lawmaker who pushed for the right of Jews to hold public office in the 19th century, the Miami Herald reports.The park would be developed on the city-owned “Massey” property on East Baltimore Street, where two blighted buildings were demolished about two years ago.

Supporters of the project said honoring Kennedy through a statue at the park would represent a “courageous pursuit of liberty.”

Jews could not hold public office in Maryland, which caught the attention of Kennedy, a local member of the state legislature who drafted a law to allow Jews to hold public office, an effort that met with failure for years before it was passed in 1826.