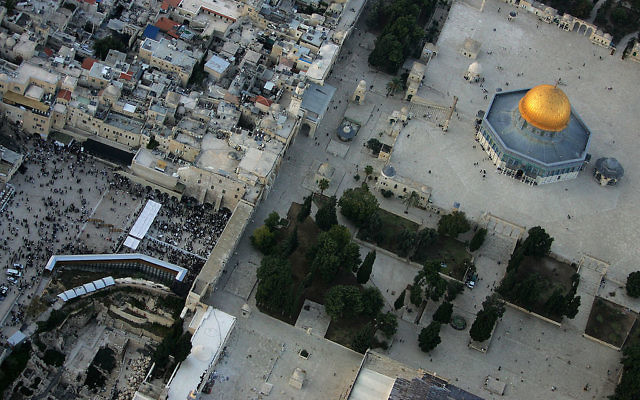 An aerial view of the Dome of the Rock on the Temple Mount and the Western Wall Plaza. The Temple Mount was closed to visitors following an attack last week that killed two Israeli policeman. It has now been reopened. Getty Images

Admission for Jewish visitors to the Temple Mount was reestablished on Monday, three days after the holy site in Jerusalem was closed in the wake of a deadly terrorist attack, the Jerusalem Post reports.  on Friday. A small group of Jewish visitors entered the compound on Monday morning to recite Kaddish for the attack’s victims.

The two Border Police who died in Friday’s attack were both of the Druze faith.

A Knesset committee has approved a bill that would make it difficult to divide Jerusalem in a peace deal, according to JTA. The Ministerial Committee for Legislation approved an amendment to an existing Basic Law that would require a majority of at least 80 Knesset members to pass a decision to give up land in Jerusalem.

The legislation, which is supported by Prime Minister Benjamin Netanyahu and his ruling government coalition, is expected to pass the required three readings in the Knesset. The United Jerusalem bill was proposed by Jewish Home Party head Naftali Bennett and lawmaker Shuli Mualem-Rafaeli. 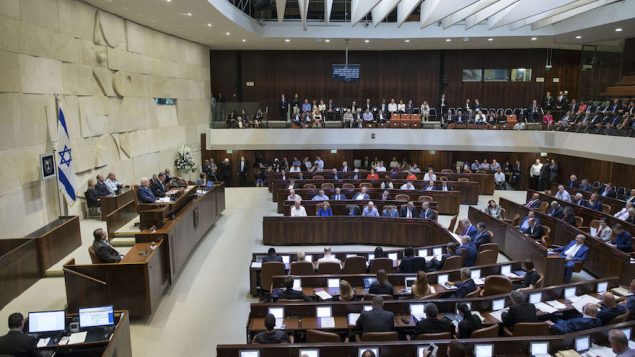 Israeli Prime Minister Benjamin Netanyahu during a visit to Paris last week took part in a commemoration ceremony for the victims of a mass arrest of Jews in Nazi-occupied France in 1942, BBC reports. More than 13,000 Jews were rounded up and detained at a cycling stadium, the Velodrome d’Hiver, before being deported to Nazi death camps.

Netanyahu also held direct talks for the first time with French President Emmanuel Macron. “I’m here to mourn the victims,” he told an audience in Paris that included Jewish groups and Holocaust survivors.

The deportees were taken by train, mostly to Auschwitz concentration camp. Fewer than 100 people survived.

Kosher food will be available this week for the first time at Wrigley Field, home of the Chicago Cubs, popular food blog, Yeah That’s Kosher, reports. The Romanian Hot dogs, Romanian Polish Sausages, Super pretzels, and drinks will be supplied by Danziger Kosher Midwest, under the CRC kosher supervision agency. 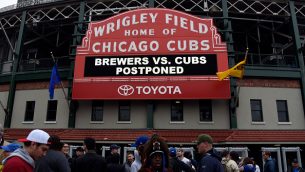 Gideon Falter, chairman of the England’s Campaign Against Antisemitism, has accused the country’s police and prosecutors of a “betrayal” of the Jewish community, following the release of a study that shows an increase in hate crimes that target Jews.

The Standard newspaper reports “intolerable” levels of hate crime during the last few years. Anti-Semitic crimes recorded by police forces in the United Kingdom increased by 14.9% in 2016, according to figures provided following Freedom of Information requests.

“The solutions are simple, but whilst the right promises are being made, little has been implemented. The result is that British Jews continue to endure intolerable levels of hate crime,” Falter said.

Martin Landau, a prolific character actor who became a star in the “Mission: Impossible” TV series, and played a rabbi, a Holocaust survivor and the prophet Abraham in movies, died July 15 at 89 at UCLA Medical Center in Los Angeles, the Jerusalem Post reports. Mr. Landau, a Brooklyn native, won an Oscar for his portrayal of a washed-up Bela Lugosi in the film “Ed Wood.:

He was nominated three times for Oscars. 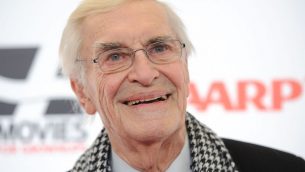 Jewish Holocaust survivors of the 1941 pogrom in Iasi, Romania and the “death trains” that followed are now eligible to receive compensation pensions, JTA reports. Julius Berman, president of the Conference on Jewish Material Claims Against Germany, said that according to the agreement with the German government the survivors will receive an increase for home care provision and other services offered through Claims Conference programs.

About 15,000 Jews were murdered in the June 1941 pogrom or died on the trains — which took many survivors of the massacre across the country for eight days  — from suffocation, dehydration and starvation. The Jews left behind in Iasi were forced to live in a designated section of the town set up as an open ghetto, under curfew and in constant fear of deportation to labor camps, while enduring regular beatings and cruelty by German and Romanian soldiers.