New York City police are on the hunt for a person who carved nearly 30 swastikas into newly poured concrete in a Jewish neighborhood in Brooklyn over the weekend, the Daily News reports. Surveillance video taken early Saturday morning shows a dark-haired man holding a small flashlight in his mouth as he etched swastika after swastika into the cement along Newkirk Avenue in Midwood.

The NYPD’s Hate Crime Task Force is investigating the incident. Police believe the culprit is a teenager.

Avi Gabbay, with roots in Israel’s Kulanu party, was elected yesterday as the new chairman of the Labor Party, beating veteran lawmaker and former leader Amir Peretz in a “dramatic turn of events for the party” that has not won a national election since 1999.

The Times of Israel reports that Gabbay won 52.4 percent of the vote compared to Peretz’s 47.6, in last week’s first round of voting, which saw incumbent Labor head Isaac Herzog removed from the running, Peretz had finished in the lead.

Peretz, a former defense minister who led the party as a junior coalition party under Kadima over a decade ago, had campaigned vigorously for the post since December.

The Jewish people does not exist, PLO Ambassador to Chile Imad Nabil Jada’a told an audience during a recent talk he gave in Santiago this May, according to a video released by the Institute for the Study of Global Anti-Semitism and Policy, the Jerusalem Post reports. Addressing members of the “Gran Logia” Masonic Lodge, Jada’a said that Palestinians “don’t recognize the existence of the Jewish people” as there is not, in fact, any such people.

“This is not my personal analysis. Here we can refer to the Jewish Israeli professor from the University of Tel Aviv, Dr. Shlomo Sand, in his book ‘The Invention of the Jewish People.’ A Jew with Israeli passport announces that, the so-called Jewish nation is a made-up invention. Because a religion cannot be a people,” he said.

Sand believes that contemporary Jews are descended from the Khazar people from the Caucasus and are not connected to the Biblical Israelites. His ideas are widely opposed both in academia and among Jews.

Jada’a recommended that his listeners read the “The Protocols of the Elders of Zion,” a Czarist forgery published in the early 20th century purporting to expose the inner workings of a global Jewish conspiracy.

Some 100 people this week attended a ceremony commemorating the victims of the pogrom in Jedwabne in northeast Poland, JTA reports. The first-time ceremony was attended by Bishop Rafał Markowski, president of the Council for Religious Dialogue and the Committee for Dialogue with Judaism, who said that the Catholic Church prays for the Polish perpetrators of the murder and apologizes for it.

Emil Jeżowski, from Israel’s embassy, read a letter from Israel’s Ambassador to Poland Anna Azari, in which she emphasized that Israel remains friendly as it watches the difficult path being taken by Poland to learn its history.

On July 10, 1941, several dozen inhabitants of Jedwabne murdered several hundred Jews living in the town and its surroundings. More than 300 people were burnt alive in the barn, where today there is a monument commemorating the events. 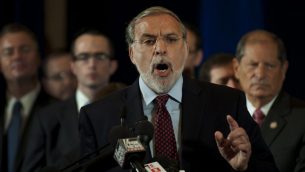 Although a US judge ordered Palij deported in 2004, after finding him guilty of being an SS guard during World War II at the forced labor camp Trawniki in Poland, he still resides in Queens, New York.

“I’ve been reaching out to high-level members of the Trump administration,” said Hikind, the son of Holocaust survivors. “The rights and freedoms we enjoy in America should not extend to those who facilitated the death of countless innocent people. I will never rest while a Nazi lives comfortably in our country.”

Efforts to remove the former Nazi guard have been ongoing for several years. Many protests have taken place outside Palij’s home, and several petitions have been signed.

High-ranking Palestinian and Israeli officials gathered in a field outside the West Bank city of Jenin on Monday to turn on the first-ever piece of Palestinian-owned electricity infrastructure and ink a new electricity agreement between the two sides, according to the Times of Israel.

The deal, hailed as “historic” by signatories, will for the first time “set parameters for the supply of power between Israel and the Palestinian Authority, which for years has seen the PA default on billions of shekels of debt and Israel subsequently withhold electricity,” the news service reports.

The station represents the first time the Palestinians will be able to control the distribution of the electricity to their own towns and cities. It will allow Israel to send up to 135 more megawatts to the northern West Bank area, though the agreement currently calls for just 60 more. The energy will provide a much-needed boost to the Jenin area, which has suffered power outages more than any other Palestinian West Bank region.

Mashour, 26, signed a two-year deal with an option for a third season. A product of Maccabi YMCA in Nazareth, he was the Israel Super League’s discovery of the season two years ago when he first played for Bnei Herzliya. He helped Herzliya sweep Maccabi Tel Aviv in their three regular season meetings, but then injured his shoulder.

Maccabi Tel Aviv has hit a dry spell in recent years, failing to win the league championship for the past three seasons, after making 22 consecutive appearances in the championship final and amassing 51 titles.