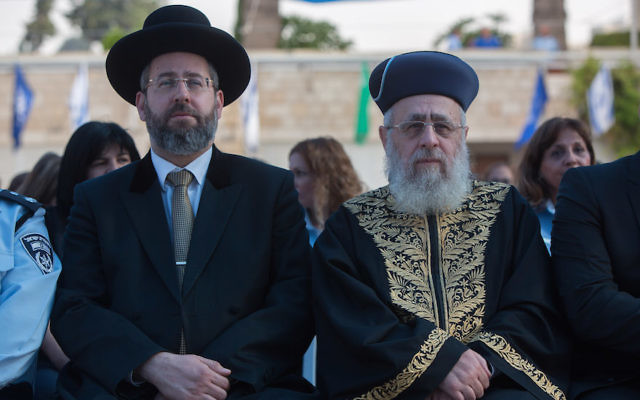 Israel’s Ashkenazi Chief Rabbi David Lau said in a letter released yesterday that he did not know of the existence of a “blacklist” of Diaspora rabbis whose conversion s are not recognized by the Chief Rabbinate, and that it should not have been released to the public, JTA reports.

“The Chief Rabbi was shocked to discover this list. This was done without the rabbi’s knowledge or his agreement. How can a list like this be publicized without the rabbi being made aware of the list itself or of its publication?” read the letter written by an aide on behalf of Rabbi Lau. “The damage this does to certain rabbis cannot be exaggerated – including to the Chief Rabbinate.”

The list of 160 rabbis from 24 countries, including the United States and Canada, and including Orthodox, Conservative and Reform rabbis, was released to JTA and other news outlets over the weekend by Itim, a nonprofit that guides Israelis through the country’s religious bureaucracy.

Israeli police on Monday detained six suspects on suspicion of corruption offenses in the investigation of Israel’s acquisition of three German-made submarines, according to the Jerusalem Post. The six suspects were government officials who worked in the private sector at the time of the submarine deal, police said —one is close associate of Prime Minister Benjamin Netanyahu.

Questions over the 2014 submarine deal surfaced last November with a Channel 10 report that Netanyahu’s personal lawyer David Shimron worked as an intermediary for Miki Ganor, the Israeli representative of the German shipbuilder ThyssenKrupp.  Shimron is reportedly suspected of pushing to buy some $1.5 billion in submarines from the German firm over the objections of the defense establishment, including then-defense minister Moshe Ya’alon.

Rabbi Menachem Chinn of East Windsor, N.J., has admitted that he had sexually exploited two young boys—who were students of his at separate times in 2005 and 2012—when they were under the age of 13, the centraljersey.com website reports.

In return for pleading guilty to two counts of second-degree endangering the welfare of a child, the rabbi will avoid going to prison, but get two suspended five-year-terms that will run concurrently; he will have to register as a Megan’s Law sex offender and be parole supervised for life.

In April, he was charged with sexually assaulting a then 12-year-old-boy in the Chin  home in 2012, the Mercer County Prosecutor’s Office and East Windsor Police announced. Subsequently, a second victim claimed that Chinn had sexually assaulted him in 2010 and 2011 as a teenager. The same victim in that case then alleged an earlier incident, in 2005, when he was of a middle school age.

One of the incidents, Rabbi Chinn admitted, took place in the school where he had taught, the Shalom Torah Academy.

A federal appeals court has affirmed the convictions of Rabbi Mendel Epstein of Lakewood, N.J., and two other rabbis who were found guilty in a conspiracy to kidnap Orthodox Jewish husbands to force them to grant their wives permission to divorce, the Asbury Park Press reports.

Rabbi Epstein, 70, is serving a 10-year prison term imposed in 2015 His conviction and that of two other rabbis, Jay Goldstein, 61, and Binnaymin Stimler, 41, both of Brooklyn, were upheld by judges with the 3rd Circuit Court of Appeals.

Adina Miles, an Orthodox Jewish mother from the Flatbush section of Brooklyn and popular social media personality (aka “Flatbush Girl”), has stirred up some “Insta-controversy” with “a strategically placed emoji that doubled as a sly stand in favor of women’s rights,” the Daily News reports.

After taking out an ad in the Flatbush Jewish Journal to thank City Councilman Chaim Deutsch for joining her in a local graffiti cleanup—the ad featured a photo of herself smiling next to Deutsch and a crew of volunteers – she has been “barraged with online abuse since using an emoji to shield her face in a newspaper that wouldn’t print a photo of a woman,” according to the paper.

The paper refused to run a photo of her unblurred face, saying it violated modesty rules. “They were making me not show my face. They wouldn’t let me print the word ‘girl.’. . . I wanted to become a scapegoat bringing attention to this issue,” said Miles, 29. “We’re not even second-class citizens. We’re not being let in,” she said, adding she wanted “to bring awareness to how ridiculous the standards of the publication have become.”

What's the next big problem that I should bring awareness to with Councilman Chaim Deutsch & Flatbush Shomrim? Let me know in the comments below and I'll relay the message ⬇️⬇️⬇️

The leader of a fringe haredi Orthodox sect suspected of abusing children drowned in a river in Mexico, according to local media.

Israeli-born Rabbi Shlomo Helbrans reportedly was found drowned in a river Friday in the Mexican state of Chiapas. A scene from a police raid by Guatemalan police on Lev Tahor’s homes. Screenshot/CBC Youtube

Israel’s Ministry of Foreign Affairs said in a statement Saturday night that it is looking into the reports of Helbrans’ death to determine if they are accurate.

The sect, which has about 230 members, relocated to Guatemala from Canada in 2014 following allegations of mistreatment of its children including abuse and child marriages.

It moved in 2016 from the outskirts of Guatemala City to Oratorio, a village 30 miles east of Guatemala City, after religious disputes with its neighbors, and reportedly crossed the border from Guatemala to Mexico three weeks ago.

Jonathan Woocher, who helped shaped American Jewish educational priorities as the longtime head of the Jewish Educational Service of North America and later as founding president and senior fellow of the Lippman Kanfer Foundation for Living Torah, has died of cancer at 70, JTA reports.

Mr. Woocher, who worked closely with the federation world, was instrumental in creating the Renaissance and Renewal pillar, or department, of the former United Jewish Communities — now known as the Jewish Federations of North America — in 2000. A professor of Jewish communal studies at Brandeis University before coming to JESNA in 1986, he was admired for his experience in Jewish education, connections with various players in Jewish life and familiarity with the Jewish philanthropic establishment.

He led JESNA, which shut down in 2013 as federations shifted their educational funding from national efforts to local ones, for 27 years.