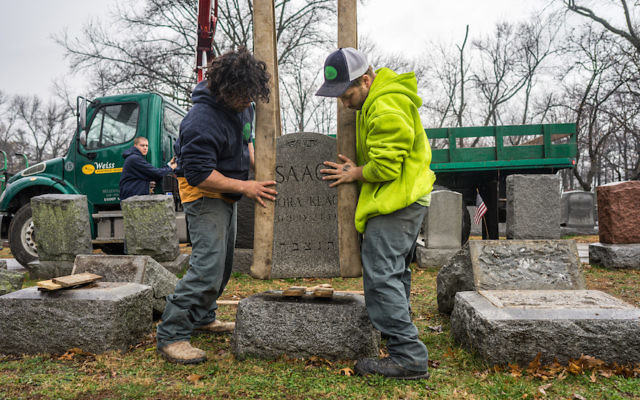 Workers placing headstones back on their bases at Chesed Shel Emeth Cemetery in the St. Louis area. JTA

A St. Louis-area Jewish cemetery was rededicated on Sunday, nearly six months after more than 150 headstones were toppled and damaged by vandals.

JTA reports that dozens of members of the St. Louis Jewish community and its supporters gathered at the Chesed Shel Emeth cemetery in University City, Missouri, to honor those who are buried there and “acknowledge the help and support of the entire local community.”

Among those in attendance at the rededication was Tarek El-Messidi, founder of the Muslim organization Celebrate Mercy, which set up a crowdfunding campaign that raised $162,000 from nearly 5,000 donors.

No suspects have been identified in the vandalism attack. The Anti-Defamation has offered a $10,000 reward for tips that lead to an arrest in the case.

A fire early yesterday morning that burned a large kitchen and spread to nearby pine trees at Camp Ramah in Colorado’s Jefferson County triggered the evacuation of about 130 children, the Denver Post reports. No children, counselors or firefighters were injured.

It will take several days to determine the cause of the fire, fire officials said. Below is a video of the camp director’s briefing following the fire.

David Satterfield, a veteran American diplomat who has served in several key Middle East postings, will become the new acting Assistant Secretary of State for Near East Affairs, Haaretz reports.

Satterfield, whose State Department job will start in September, has served as a diplomat in Saudi Arabia, Lebanon, Syria and Tunisia. In the George W. Bush administration, he served as a senior adviser to Secretary of State Condoleeza Rice and as the department’s coordinator for Iraq. In 2009 he was appointed to director general of the multi-national force in the Sinai, which helps maintain the Israeli-Egyptian peace agreement.

The Democratic Socialists of America (DSA) at their biannual convention in Chicago have voted to endorse an anti-Israel BDS (boycott, divestment and sanctions) motion, the Jerusalem Post reports. The vote took place on Shabbat, “when many Jews would not be in attendance,” and passed “in a landslide,” according to the paper. “Following the motion’s passing, the crowd enthusiastically chanted ‘from the river to the sea, Palestine will be free,’ a refrain popular among pro-Palestinian activists.” The decision to hold a BDS vote on Shabbat or other Jewish holidays “is not a new tactic for activists seeking to disavow Israel and any institutional contact with the Jewish state,” the Post reports, citing similar votes in recent years at several U.S. universities.

An Apache helicopter crashed near the Ramon Air Force base in the south of Israel yesterday, killing the pilot and injuring two passengers.

According to Haaretz, the deceased pilot was identified as Maj. David Zohar, a 43-year-old veteran pilot serving in reserve duty. The helicopter was returning to the base after a training flight when a technical malfunction was reported and the helicopter crashed near the landing pad at the base.

Ernst Zündel, a far-right activist who rose to notoriety over decades of public neo-Nazi activity in Canada and the U.S. before being deported back to his native Germany on Holocaust denial charges, has died at 78, Haaretz reports.

He achieved international notoriety for his neo-Nazi beliefs and writings, including “The Hitler We Loved and Why,” and operated Samisdat Publishers, a leading distributor of Nazi and Nazi-era propaganda. 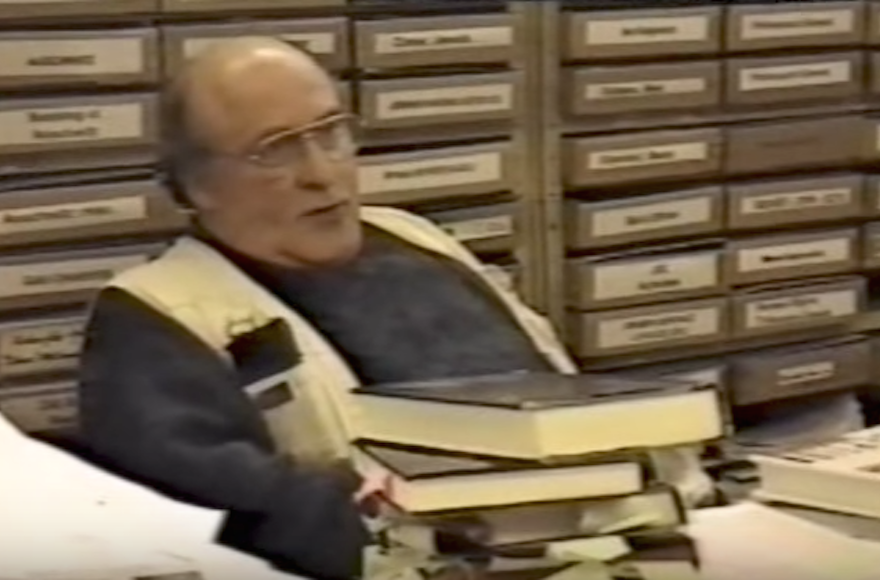 Born in Germany in 1939, Zündel emigrated to Canada in 1958 – allegedly to avoid German military service – and lived in Toronto and Montreal until 2001.

After leaving Canada, he moved to Pigeon Forge, Tennessee, where he had married fellow right-wing extremist Ingrid Rimland.

In 2003, deported back to Canada for alleged immigration violations, he was arrested and held in detention until a judge ruled in 2005 that his activities posed a threat to national and international security and he was deported to Germany, where he was being sought for Holocaust denial.

JTA — The remains of a man killed at the World Trade Center on 9/11 have been identified.

The identification of the remains 16 years after the terror attacks, announced on Monday, are the first since March 2015, the Associated Press reported.

The name of the victim was withheld at his family’s request, the New York City medical examiner’s office said.

The remains were identified through DNA testing, using new and more sensitive DNA tests than were previously available.