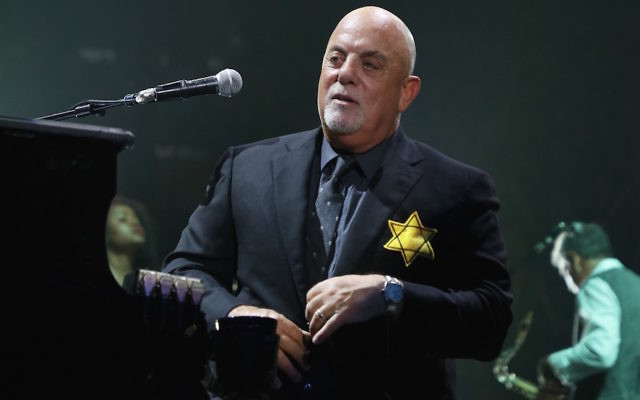 Billy Joel wears a jacket with the Star of David during the encore of his 43rd sold out show at Madison Square Garden on August 21, 2017 in New York City. JTA

Singer Billy Joel wore “a very noticeable yellow Star of David” on his suit lapel during a concert this week at Madison Square Garden, the Jerusalem Post reports.  “Joel was reportedly protesting the growing visibility of neo-Nazi and antisemitic hate speech in the United States – and the equivocation on the topic by US President Donald Trump.”

The star was a reference to the yellow stars Jews were forced to wear during the Holocaust. Joel, who grew up on Long Island, was born to two Jewish parents, and has described himself as culturally Jewish.

Signs with anti-Semitic messages were hung on highway overpasses in Oregon ahead of yesterday’s eclipse, JTA reports. The banners were hung on two northbound highways, which were heavily traveled by California tourists heading to the state to get a better view of the solar eclipse.

The banners read, “UNJEW HUMANITY,” “Eclipse Whitey,” “Jewish Financing Available” and “Resist Racial Eclipse. They were taken down later in the day.

Poll: One in ten Americans back neo-Nazi views

A new poll indicates that nearly one in ten Americans believe that neo-Nazi and white supremacist ideology is “acceptable,” according to the Times of Israel. The ABC News/Washington Post survey was conducted in the wake of the violent white nationalist rally earlier this month in Charlottesville, Virginia, in which a woman was killed when a white supremacist drove into a group of counter-protesters.

According to the poll of 1,014 respondents, 9 percent of people said that neo-Nazi views are okay to hold, while 83% said such ideology is “unacceptable” and 8% had no opinion.

Among Republicans, 13% said that neo-Nazi views were acceptable, and the number climbs to 17% among Trump supporters.

In a sermon delivered from his pulpit last Saturday, Rabbi David Wolpe (who has a column in The Jewish Week) called on President Trump to repent for his remarks following the neo-Nazi march in Charlottesville on Aug 12.

“I never thought I would have to speak these words to a congregation but here they are: These are Nazis!” the Los Angeles Jewish Journal quoted Rabbi Wolpe as saying. “These are the people who rounded up our people all over Europe and put them in gas chambers. And they marched in the streets of an American city. And people defended the silence of the leader of our country for a full day.”

Wolpe is the Max Webb Senior Rabbi of Sinai Temple, in West Los Angeles. Newsweek magazine has named him “the most influential rabbi in America.”

Anti-Semitic and race-related graffiti was found scrawled this week at three schools in the town of Markham, a suburb of Toronto, over the weekend, Arutz Sheva reports. Disturbing messages that equated Jewish symbols with Nazism and made reference to the KKK and “White Power” were found on playground equipment at a public school in the town.

Similar graffiti at was also found at another public school as well as at a local high school. York Regional Police Inspector Alvara Almeida told CTV News that the incidents are being treated as a hate crime. Almeida said police are working to identify the perpetrators.