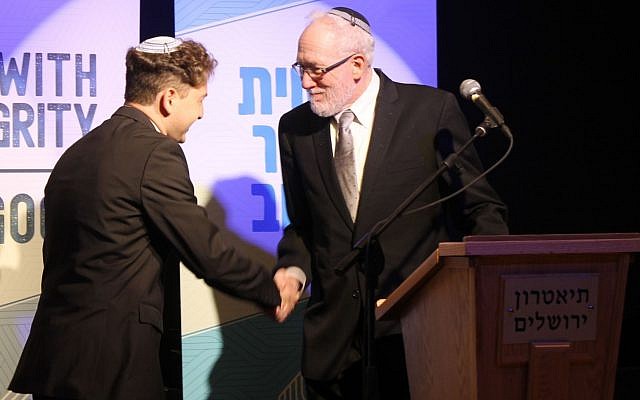 Newly ordained Rabbi Daniel Atwood is congratulated by Rabbi Daniel Landes at the Jerusalem Theater on May 26, 2019. JTA

JERUSALEM (JTA) — A gay rabbinical student denied ordination by a liberal seminary in New York was welcomed into the rabbinate in Jerusalem, breaking a longstanding taboo against homosexuality in the Orthodox community.

Daniel Landes, a prominent American-Israeli rabbi, granted semichah, Hebrew for ordination, to Daniel Atwood alongside a mixed group of men and women at the Jerusalem Theater on Sunday evening during a ceremony attended by more than 200 guests.

Atwood was informed earlier this year that he would not be ordained after completing his studies at New York’s Yeshivat Chovevei Torah despite the school previously saying it would ordain him.

While there has been a significant increase in empathy for LGBT Jews in recent years within the Orthodox community, inclusion has rarely reached the level of communal leadership, and same-sex marriage is universally prohibited. Atwood became engaged to another man last fall.

“I was told three years ago that my giving woman semichah would create chaos and damage them and their families and dumb-down Torah learning. The opposite has been the case,” Landes, who until recently was the longtime head of the co-ed, nondenominational Pardes Institute of Jewish Studies in Jerusalem, told attendees at the ordination ceremony.

“Here’s the real question. Is our Torah and halachic system so weak and devoid of resources that it cannot be challenged by a new situation?” Citing the verse “The Torah is perfect, restoring the soul,” Landes thundered that “it is a perfect Torah only when and if it restores the soul. That’s what we need to work for.” 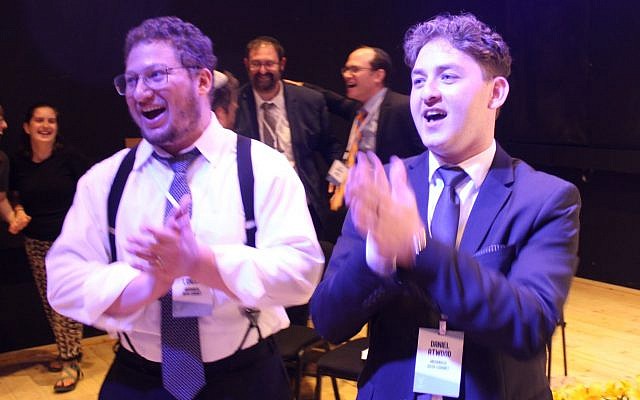 Rabbi Daniel Atwood, right, celebrates his ordination at the Jerusalem Theater on May 26, 2019. JTA

In 2016, Landes ordained eight Orthodox women as rabbis in a ceremony here. The ordination program is part of Yashrut, an organization he heads that aims to build “civil discourse through a theology of integrity, justice, and tolerance.”

Atwood — a 27-year-old graduate of Yeshiva University, Modern Orthodoxy’s flagship institution — smiled throughout the ceremony, dancing with Landes and his fellow ordainees.

“I feel very excited to be receiving semicha and very grateful to Rabbi Landes and Yashrut for taking me on,” he told the Jewish Telegraphic Agency, adding that his joy was tempered by “a little sadness to not be with the cohort and teachers that I learned with for many years at YCT.”

Asked how he felt to be a representative of the LGBT community within American Orthodoxy, Atwood replied that he felt “that responsibility very strongly” and that while he had not set out to be a symbol, he hoped that he could become “a rabbinic presence for LGBT [Jews] and Jews of all sorts, whatever their orientation, who feel left out.”

Many young gay Orthodox Jews who would have previously left the fold are staying “and it’s almost unimaginable for them to not have a place,” he continued. “They are demanding a place and I think that having spiritual leadership guide that along is important.” He also downplayed any conflict between his LGBT and Orthodox identities, saying that he was not “looking for labels that are going to get in the way of the good work that needs to be done.”

Orthodox Judaism had traditionally firmly opposed same-sex relationships, although there is a growing movement toward inclusion among more liberal elements of the community. However, Atwood’s case shows that even this tolerance has limits.

While Chovevei Torah initially welcomed Atwood with full knowledge of his orientation, the yeshiva’s dean told JTA that a recent, unspecified event caused a reevaluation of the decision to grant him ordination. Six months ago, Atwood and his partner got engaged on the stage of a concert in New York City.

“He came out to us in the end of his first year and we were fully prepared to give him semichah until certain circumstances arose over a few months ago,” Linzer told JTA last month. “Because this is such a sensitive issue, it took us a few months to come to the decision that I came to. I was trying to figure out if there was a possible way forward. I came to the conclusion there was not.” He acknowledged that the process of denying Atwood ordination “was not handled well.”

The Reconstructionist and Reform movements began ordaining gay rabbis in the 1980s, with the Conservative movement following in 2006.

Atwood’s fiancé, Judah Gavant, told JTA that he is very proud of both his partner and “our whole community” and that Atwood’s ordination was part of a process of “moving things forward and making a Jewish world that is available to more people that want to be a part of it.”

Late last year several dozen Israeli and American Orthodox rabbis co-signed an open letter in support of the LGBTQ community in response to a letter from some 200 other Orthodox rabbis in Israel that called its members “perverts” and an “organization of abominations.”

For his part, Landes does not believe that the Biblical prohibition of same-sex relations applies to people for whom homosexuality is “not an act of volition” and thinks that there is room for LGBT Jews in the wider community.

Rabbi Nathan Lopes Cardozo, another prominent rabbi who has occasionally come into conflict with the Orthodox mainstream, agreed with Landes, telling JTA that while he didn’t have a rabbinic source to back it up, he believes that “the prohibition [on homosexual acts] only applies to those who are purely heterosexual.”

“I think that people really trying to serve the Jewish people should be looked after and that I have a small role in that,” Landes told JTA. “And when they are totally outstanding I want to be helpful.”

Asserting that Orthodox views of homosexuality have been slowly changing, he said that there is a new awareness that “they’re not pedophiles, they’re not people of falsehood or whatever, they’re good people.”

Landes said that the genesis of his transformation from the mainstream Orthodox position, which views homosexuality as a grave sin, came several decades ago after he explained to members of his own congregation in the United States why he had declined to attend a conference organized by the Central Conference of American Rabbis after the Reform-affiliated group passed a resolution on LGBT inclusion. A young man with whom he was close walked out of the explanation with a hurt look on his face.

“I saw his eyes the look of betrayal,” Landes said. “I never suspected. What did I do wrong? I knew I did something terribly wrong. So that has haunted me. And did I ever find him? I found him. He didn’t want to speak to me. So there is no happy ending to the story.”

And while the rabbi initially couldn’t imagine gay Jews wanting to remain in the Orthodox community, let alone become Jewish scholars under its auspices, he now has a different view. “I think we will start within the gay community itself and if there is the ability to create a real community on the religious level it will lead to acceptance or maybe it will be limited for a long period,” he said. “Things happen when you have some openings.”

Asked for comment, Rabbi Avi Shafran, spokesman of the Orthodox Agudath Israel organization, told JTA that “if ‘Orthodox’ retains any meaningful meaning, the adjective is merited neither by the institution that declined Mr. Atwood nor the individual who is ordaining him.”