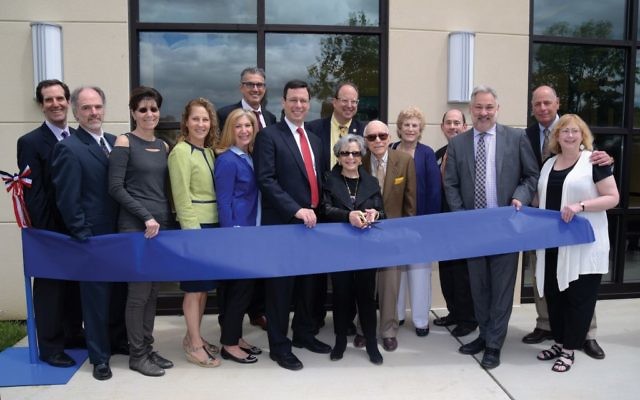 The ribbon-cutting ceremony last week for the Harold & Elaine Shames JCC on the Hudson in Tarrytown. Courtesy of the Shames JCC

With the official opening this week of the Tarrytown Harold & Elaine Shames JCC on the Hudson, Westchester’s Rivertowns and nearby communities gain an impressive complex designed to meet the needs of wide-ranging demographic groups, from toddlers to seniors citizens.

The June 7 ribbon-cutting of the $6.5 million, 75,000-square foot Harold and Elaine Shames JCC on the Hudson — 20 months since ground was initially broken on the 6.6-acre complex — attracted a crowd of about 150 donors, political and local dignitaries, as well as many of the center’s members and supporters.

“This is the first Jewish community center to be built in Westchester in over 40 years,” said Susan Tolchin, a previous chair of the JCC’s board, in her opening remarks. “This is a brand new, state-of-the-art, energy efficient, warm and welcoming community center.”

“This is a brand new, state-of-the-art, energy efficient, warm and welcoming community center.”

Nearly every speaker praised retiring executive director, Frank Hassid, who had led the JCC for 27 years and whose ambitious vision launched the project. A visibly emotional Hassid said, “One of the greatest satisfactions is that nobody believed we were going to do it. Harold and Elaine [Shames] could see what so many people couldn’t see, that the Rivertowns could be such a spectacular community. It’s a remarkable opportunity for a community that is ready.”

With the abrupt closing of the Northern Westchester JCC in December 2015, there are now only two JCCs in Westchester, the Shames JCC on the Hudson and the JCC of Mid-Westchester in Scarsdale.

As Elliot Forchheimer, executive director of the Westchester Jewish Council, said, “The opening of the expanded Shames JCC on the Hudson is bringing enormous enthusiasm to the Rivertowns area, one of the fastest-growing Jewish communities in Westchester. The JCC will become a focal point for the local Jewish community as a place for people of all ages and interests to gather together, to celebrate their Judaism together and all within a world-class facility.”

According to  UJA-Federation of New York’s 2011 Jewish Community Study, the Jewish population in the Rivertowns grew by more than 19 percent between 2002 and 2011, compared to 5 percent across Westchester and 9 percent in the eight-county New York City region.

The Shames JCC on the Hudson is part of the Rivertowns Jewish Consortium, which offers membership to the JCC and nearby synagogues at a discounted rate for young families.

“We have Jewish values. That’s why people come to us. It’s heartwarming.”

The JCC on the Hudson, originally founded in 1929 as the Jewish Community Center of Yonkers, migrated to various locations in the Rivertowns before taking root in its current Tarrytown location on the site of the former General Motors Training Facility. The new complex features a fitness center, aquatic center with two pools, dedicated spaces for children and teenagers, full gymnasium and a variety of studios and classrooms for expanded program offerings. The next phase of the project will include an auditorium, café, music suites and administrative offices.

The nonsectarian organization also hopes to play a role with otherwise non-affiliated Jews in the area.

“Millennials, boomers and Generation Xers are also looking for something,” said new executive director, Rabbi Andrew Ergas. “This is an easier threshold to cross. It’s not Jewish engagement through a religious lens. We’re leading with warmth and welcome, and a high quality of programs and experiences. We’re hoping to build a programmatic platform that will be appealing to the whole Westchester community.”

Even more important, however, is framing these connections through Jewish text and tradition, said Rabbi Ergas. “In an ever-growing transactional world, we’re relational. Judaism has always been about building connection. The challenge is to get the balance right.”

As Tolchin said, “We have Jewish values. That’s why people come to us. It’s heartwarming.”