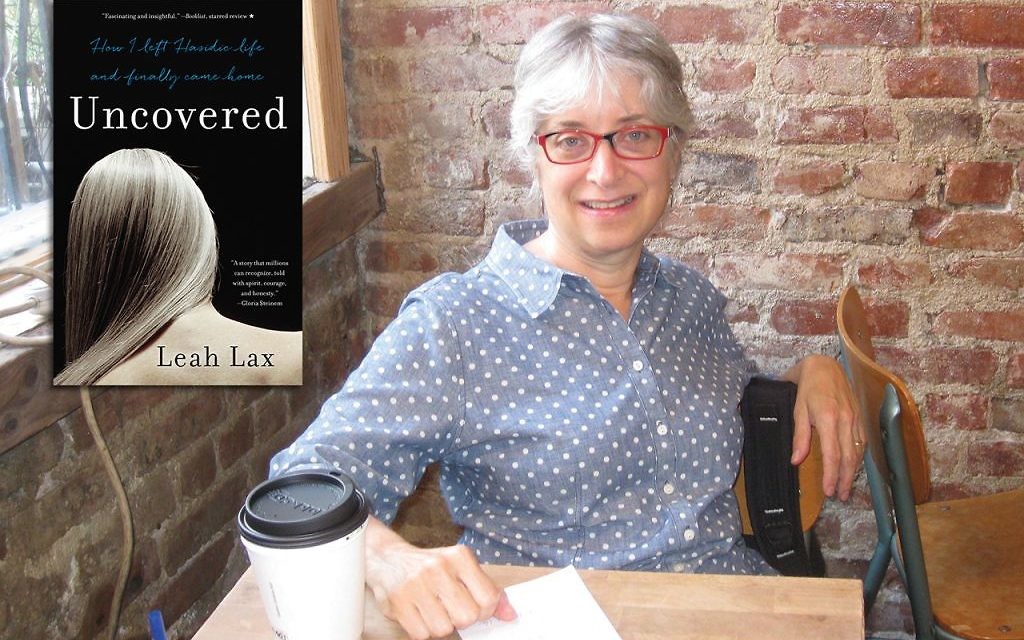 The latest ex-chasidic memoir adds a rainbow twist to an emerging literary genre.

Leah Lax’s “Uncovered: How I Left Hasidic Life and Finally Came Home” (She Writes Press) hit the shelves in late August, and it joins the ranks of popular out-of-the-fold authors including Shulem Deen and Judy Brown. Taken together, the memoirs provide readers with a seldom-glimpsed look at chasidic life from the inside, and trace the often-painful story arcs of those who leave the straight-and-narrow religious path.

But, unlike its literary predecessors, “Uncovered” is also a gay memoir. Lax, 59, who today lives with her wife of 10 years in Houston, said that she initially had difficulty publishing the book because of its double niche.

“They didn’t know what shelf to put it on — is it Jewish or gay?” she said. Sitting at a back table in a quaint Brooklyn coffee shop, Lax, who had belonged to the Lubavitch sect, wore a light blue polka-dot blouse, jeans and red-rimmed glasses, her white hair cropped short. “That’s seems to be the story of my life — caught between worlds.”

Though her memoir shares a similar narrative with other such tales, it is decidedly different in many ways, said Lax. The most glaring difference: Lax wasn’t born or raised in the chasidic community. As a teenager already struggling with her sexual identity, Lax was attracted to the insular community’s structure and promise of acceptance. A product of the turbulent 1960s and early-’70s, her decision to embrace Chabad-Lubavitch was her “adolescent rebellion.”

“I was an idealistic teen from a less-than-idealist home,” she said. “The reliable structure [the chasidic world] offered was soothing and romantic — there were roles and clear-cut rules. ‘This is how you belong’—‘this is how to be a capital-W woman.’”

The chasidic community’s homoerotic appeal, rarely discussed but evident to anyone who spends time in the chasidic world, according to Lax, also drew her in.

“Men dance with other men, sing arm in arm and even kiss one another — women are always in each others’ personal space, giving each other backrubs and being each others’ confidants,” she said. “Even then I thought it was beautiful, but I didn’t fully realize why until much later.”

“Uncovered” is also a feminist memoir, deeply inspired and guided by Gloria Steinem, the iconic feminist and author, whom Lax met while on a writers’ retreat.

“She [Steinem] helped me see my story through a feminist lens,” Lax said. She noted the irony of her own role today as a feminist spokesperson, as she speaks about her book in feminist bookstores across the country. “And to think I spent the whole era as a chasid!”

Lax, who left the Lubavitch fold at age 45 in 2001, is also the mother of seven; she had all her children in quick succession in her 20s. This, she said, is what inevitably catches people’s attention, rather than the libretto she composed for the Houston Grand Opera or her founding of the Mikveh Project, which documents the resurgence of the Jewish immersion ritual. “I have more children than any lesbian you’ll ever meet!” she joked.

Of her children (whose names are changed in the book), three have remained in the chasidic fold.

Still, though she does not look back with resentment upon her life as a chasid, her memoir has met with a stony silence from the Chabad-Lubavitch community.

Despite the cold response, today when she visits her religious grandchildren in Crown Heights, Lax walks down the streets in jeans and with head proudly uncovered.

“I struggled with shame for so long,” she said, describing how she would only go to grocery stores on Saturdays after leaving the community in order to avoid prying eyes and pitying stares. “The guilt was deeply entrenched. It took me years to build up strength. But now, I walk freely.”