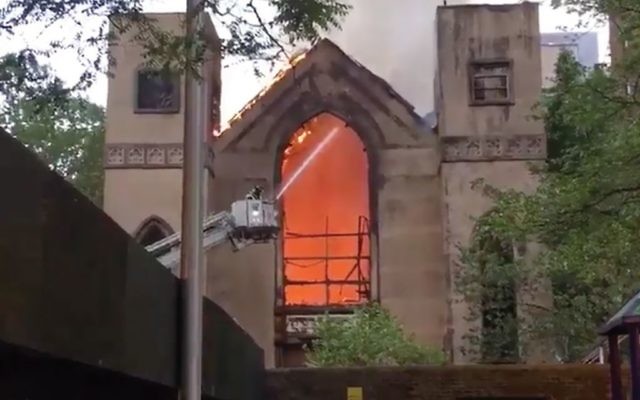 A three-alarm fire destroyed the Beth Hamedrash Hagadol synagogue on the Lower East Side. JTA

The New York Fire Department is investigating a three-alarm blaze that on Sunday gutted Beth Hamedrash Hagadol on Norfolk Street, a landmark Lower East Side synagogue.

Three people were seen on a surveillance video running from the building, which had been abandoned for a decade, according to reports. But a FDNY spokesman said this week that the “investigation is in the early stages” and it was too early to speculate if the fire was caused by arson or could be classified as a hate crime.

Teenagers had been seen trespassing on the site in recent weeks, according to published reports.

“There is no indication” whether the fire was set intentionally or was an accident, David Pollock, associate executive director of the Jewish Community Relations Council of New York, told The Jewish Week. “The question is how it became a three-alarm fire so quickly.”

The building’s roof collapsed during the fire, and most of the interior was destroyed.

The fire likely ended the possibility that the 167-year-old synagogue, among the last surviving physical symbols of the once-heavily Jewish neighborhood, will be able to complete a deal with the neighborhood’s Chinese-American Planning Council to fund renovations of the building, sell the air rights and establish a Jewish-Chinese community center on the property.

The building was empty when the fire broke out. Two firefighters sustained minor injuries injured while fighting the blaze, an FDNY spokesman said.

The Gothic-style building, built in 1850 as a Baptist church, was closed in 2007 after synagogue leaders determined that they did not have the $3-$4 million needed to repair the building, which was declared a city landmark in 1967 and an endangered historic site in 2003.

The synagogue earned renown, starting in 1952, when Rabbi Ephraim Oshry, a Lithuanian Holocaust survivor who became active in the Shoah remembrance movement, became its spiritual leader. The rabbi, whose interpretations of religious law helped sustain Lithuanian Jews during Nazi occupation and were buried in tin cans for retrieval and publication after the Holocaust, served until his death in 2003.

Rabbi Oshry headed an association of rabbis who were concentration camp survivors, and often expressed his views on issues related to the Holocaust. He opposed the normalization of relations between Jews and Germans.