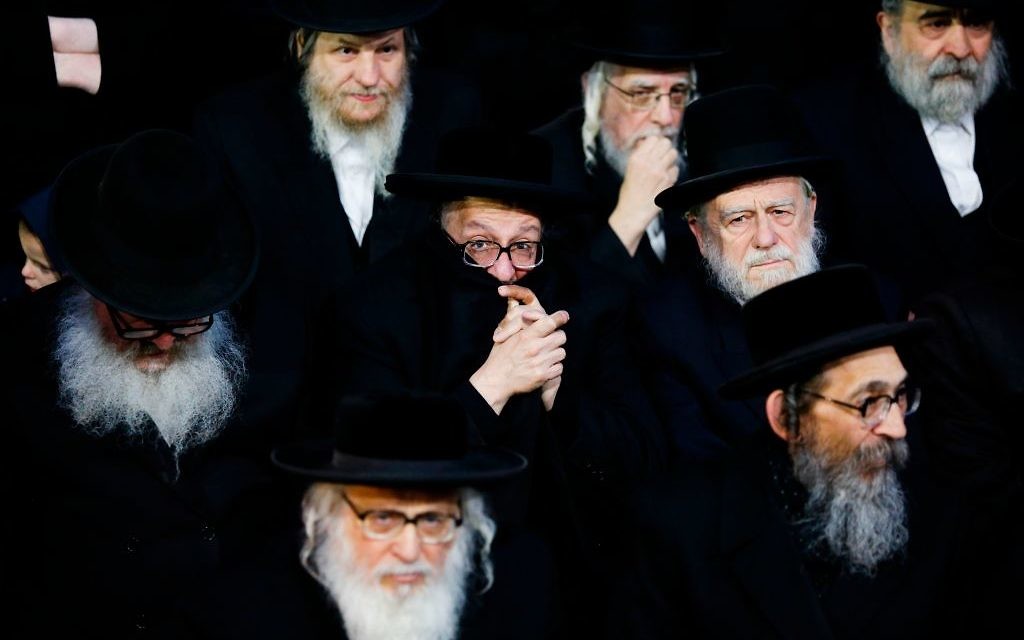 Orthodox Jews of the Satmar Hasidim gather in the village of Kiryas Joel, New York, May 14, 2017, during celebrations for the Jewish holiday of Lag BaOmer. Getty Images

A Jew once dreamed he was a rebbe. He shared his dream with the Bostoner Rebbe. The Bostoner was unimpressed, asking, “did any chasidim dream that you were their rebbe?”

People who find rebbes and chasidim mysterious and remote might think of that world as a rabbinic monarchy of sorts: authoritarian, anti-democratic. In fact, as Samuel Heilman reveals in his new book, “Who Will Lead Us: The Story of Five Hasidic Dynasties in America,” the making of a rebbe is often less monarchial than it is a back-alley scrum, the stuff of chasidic dreams that can matter even more than the rebbe’s.

Rebbes have been succeeded by sons, grandsons, in-laws, or not by a relative at all but by a leading disciple (such as the Maggid of Mezrich, disciple of the Baal Shem Tov). Some rebbes and their chasidim did not want a successor at all (such as the case with Berditichever Rebbe, or Reb Nachman of Breslov, or Chabad’s Rebbe Menachem Mendel Schneerson). The Maggid, who died in 1772, sent emissaries to distinct locations in which they became rebbes, much like Chabad.

Heilman writes that when Reb Nachman died in 1810, “the norm – if there was one – was for the group who had come together around a particular rebbe to simply scatter upon his demise and look for another to whom to attach themselves. What made the followers of Nachman stand out was their decision to try to remain together even after his death,” and they remain together to this day.” Reb Levi of Berditchev is still studied but “succession was not essential to his leadership.” 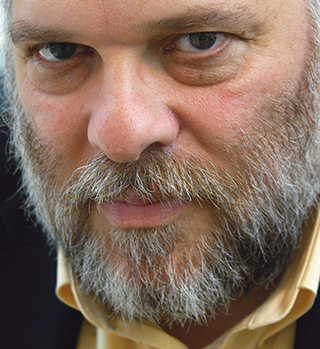 Heilman estimates that there are 900,000 chasidim, mostly in Israel and North America. A professor of both Jewish Studies and sociology at Queens College and its Graduate Center, Heilman examines two chasidic lines (Boyan and Munkatch) that had too few rebbe candidates; two with one candidate too many (Satmar and Bobov); and one (Chabad) that is thriving without any successor at all.

Bobov chasidim had a succession conflict exacerbated by the Shoah. Their rebbe, Shlomo Halberstam, lost his wife and family except for one son, Naftali, a child of Europe. The rebbe remarried after the war, and his second wife had a son, Benzion, a child of Brooklyn. So in Bobov, says Heilman, there were two oldest sons, 24 years apart, from two families. Each with their own constituency. Each with aspirations. Neither half-brother could imagine himself secondary to the other. One is now on Brooklyn’s 45th Street. Still Bobov, but nicknamed “Bobov45.” And then there’s “Bobov48,” three blocks away, miles apart. 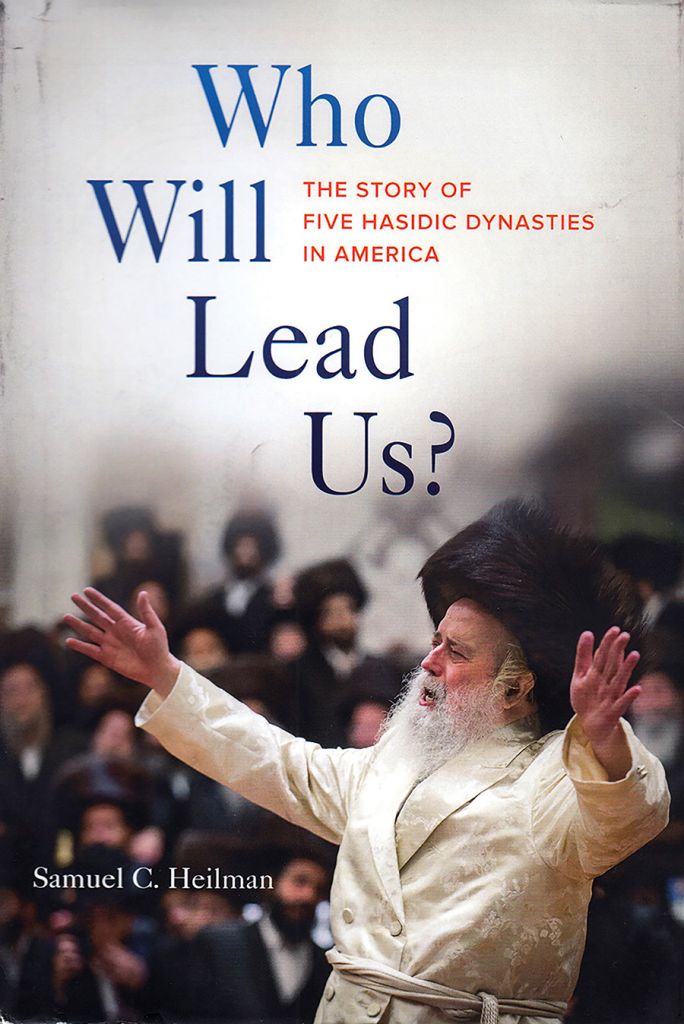 Succession is often a story of excruciating sadness, such as Heilman’s tale of Boruch (Boruchel), who became the rebbe of Munkatch in 1937, on the eve of war and upheaval. At war’s end, the few surviving chasidim were scattered or shattered. In post-war Brooklyn, chasidim could shop around for a rebbe more to their liking. Unlike Europe, one didn’t have to physically move away from Munkatch to find a new rebbe; Satmar or Bobov were now just a few blocks away. Boruch “abdicated.” A widower, unable to find satisfactory work in Israel or America, he married a non-chasidic woman and settled in Brazil, of all places.

Boruch had drifted too far, ideologically and geographically. In 1959, the remnants of chasidic Munkatch were looking for someone with chasidic “royal blood” — the zera kodesh, “holy seed” — to be the new Munkatcher rebbe. The chasidim convinced Boruch’s third son, Moshe Leib, 16, who was studying in a non-chasidic American yeshiva, to return and study the lost glory of Munkatch. They told Moshe Leib, “The holy community of Munkatch looks to you.” Moshe Leib explained years later, “I felt that a great wrong had been done” by his father, “in abandoning the rebistve” (being a rebbe, with all that entailed).

Moshe Leib’s wedding was officiated by the Satmar rebbe, not Boruch, who didn’t even walk Moshe Leib down the aisle. Boruch was given one of the Seven Blessings, and read the Ketubah under the chuppah, but during the dancing, a prominent Munkatch chasid, Chaim Ber, danced as if he was “the master of Munkatch” while the groom’s father “stood on the margins.” 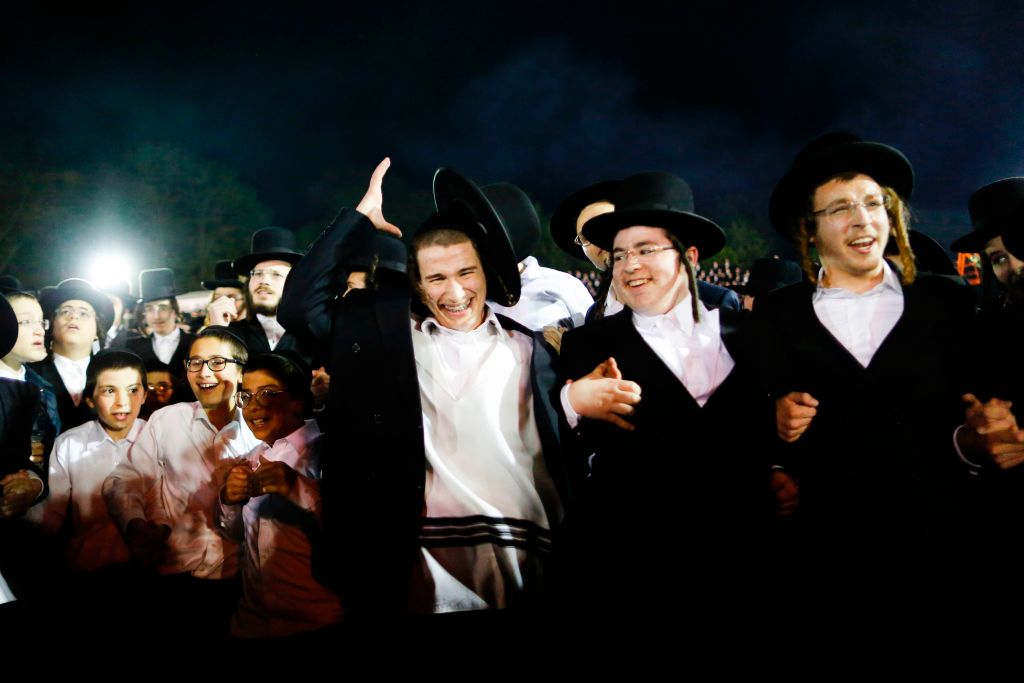 Orthodox Jews of the Satmar Hasidim dance in the village of Kiryas Joel, New York, May 14, 2017, during celebrations for the Jewish holiday of Lag BaOmer. Getty Images

After several breaches of etiquette at Boruch’s expense, writes Heilman, it was “too much for Boruchel to bear. Exasperated, Boruchel lunged at Chaim Ber, tearing hair from his beard, then grabbing the microphone from the band and stopping the dancing. The abrupt violence and sudden silence was frightening. Now Boruchel began a stunning tirade, letting out all his feelings.” The guests booed his bitterness. The band resumed the music, drowning him out. Boruch left the wedding early. Writes Heilman, “He was unready and unwilling to be parted from his son and his rebestve in so humiliating a way.”

Heilman’s analysis of Bobov, Boyan, Satmar and Munkatch are academic, “just the facts, ma’am,” thoroughly researched, poignant just the same. He writes, “This book is not a consideration of the … ideological arguments and teachings of chasidic rebbes or the spirituality that animates a follower’s attachment to them,” and yet, when it comes to Chabad, he veers into areas that have more to do with Chabad’s beliefs than the topic at hand.

For example, Heilman writes that Chabad “tried to avoid the problem of succession by denying the death of their rebbe and hence any need for succession.” However, Heilman also writes that the third, fifth and sixth Chabad rebbes, as far back as 1866, all “denied death” — but in the mystical sense (with chasidim still being able to speak to, and make requests of the late rebbe’s soul). Clearly any denial of death was not used by Chabad to avoid the problem of succession because for all that “denial,” Chabad has had seven rebbes with a chain of succession dating back to the first rebbe’s death in 1812.

That Lubavitchers don’t have a rebbe now can be said to be a matter of choice rather than denial. Insofar as Chabad is arguably as successful as any Jewish group in the world, with 5,000 of the rebbe’s emissaries serving as his surrogates, what exactly has Chabad “avoided”? Those 5,000 shluchim said Kaddish for the rebbe, observe his yahrtzeit, use the Hebrew initials representing “May his memory be for a blessing,” and regularly visit his grave, evidence that that their “denial” is poetic, not physical. 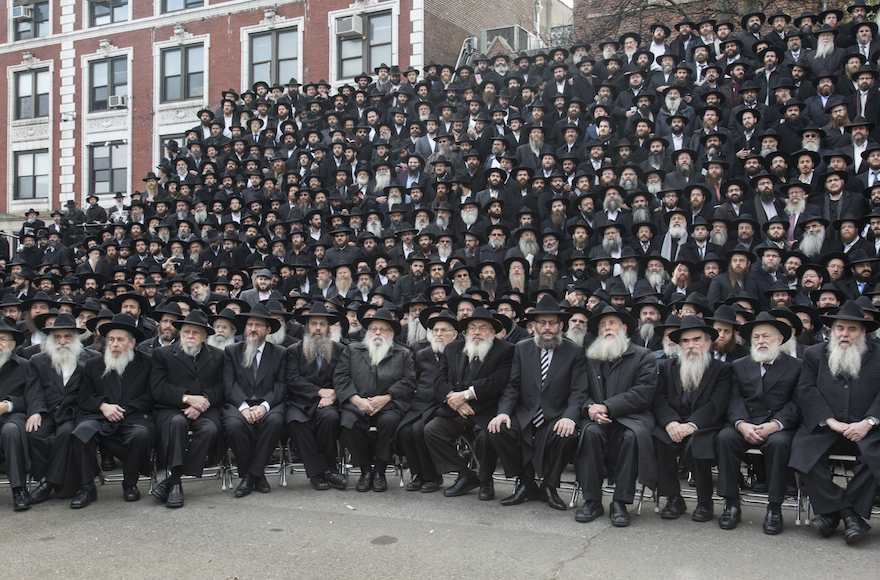 Thousands of Chabad rabbis posing for a group photo in front of Chabad-Lubavitch world headquarters in the Brooklyn borough of NY. JTA

By most counts, only a small minority of Lubavitchers deny the rebbe’s death in the physical sense, and Heilman does not provide any data to the contrary. Orthodox Jews, in general, have a sense that a connection to loved ones does not end with death. Many Orthodox Jews, not only chasidim, visit graves to invite relatives to weddings, and thousands go to Rachel’s Tomb in Israel to ask the biblical matriarch for assistance, though she’s been dead since Genesis.

At one point, Heilman writes that Schneerson “claimed to have attended the Sorbonne and other European universities.”

Claimed? Chabad has published numerous photographs of the young Schneerson’s registration, in his own handwriting, at the University of Berlin (Humboldt), with photos of his university schedule, including classes with two Nobel Prize winners. There is a registration in the rebbe’s handwriting at the Sorbonne, also on film. Chabad even has photographs of the rebbe’s tuition receipt (number 16429) in a Sorbonne accounting ledger, with his major being “differential calculus.” He did not graduate either Humboldt or the Sorbonne because he left Berlin in 1933 with the rise of the Nazis, and left Paris in 1940 the week it fell to the Germans.

Responding to a query in a phone interview, Heilman said, “there is no record of him being at the Sorbonne. Perhaps he was registered because that was the only way he could avoid getting expelled from France … he didn’t really have a passport.” He added, “There is a document that he registered [at the Sorbonne] but there is no evidence that he took any courses.” Chabad’s web site explains, backed up by a photo of a newspaper story, “Many of the Sorbonne student records were destroyed in a fire caused by student riots in 1968,” but dozens of documentary photographs survive.

Succession is elusive for everyone. Yeshiva University never quite replaced Rav Joseph Soloveitchik; the Conservative movement never quite replaced Rabbi Abraham Joshua Heschel; and there are hundreds of Carlebach minyans but no replacement for Reb Shlomo. But as chasidim know, no one really dies; inspiration is forever.