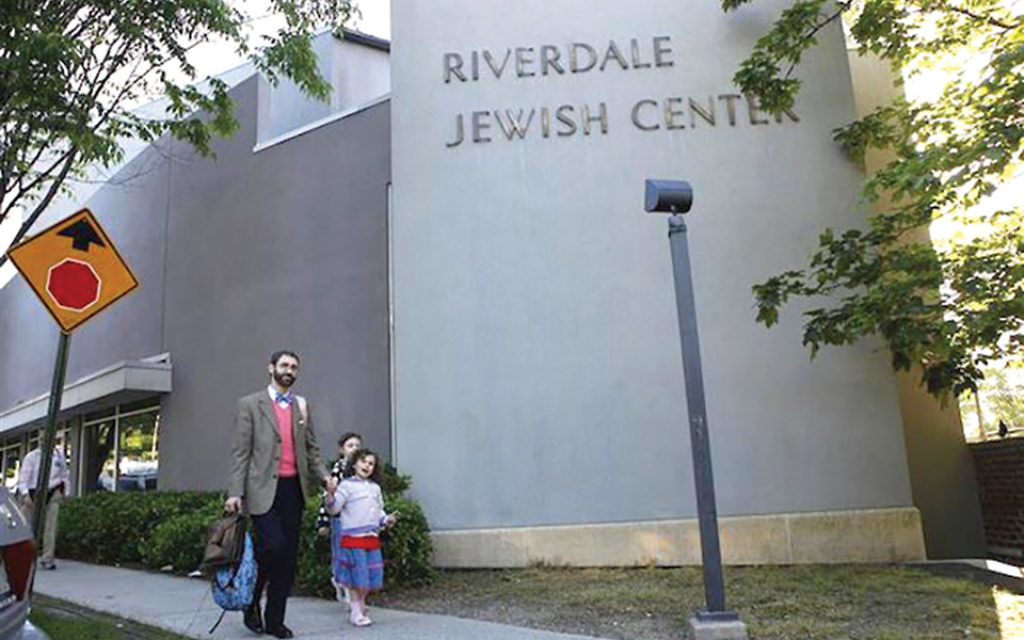 Outside the Riverdale Jewish Center in the Bronx, shown n 2016. (File)

The Riverdale Jewish Center, the Modern Orthodox synagogue that recently parted ways with Rabbi Jonathan Rosenblatt over his unusual behavior with young men, is in financial crisis.

A message this week from the executive committee of the congregation to the membership said “the undisputable fact is that the operating account is completely depleted.”

It added that “the doors of the RJC remain open only due to the generosity of a few families who have donated approximately $120,000 in new contributions over the last month, allowing us to cover our operating expenses.”

The letter, signed by Tzvi Bar-David, the newly elected president of the congregation, said “we will need $1.2 million in order to reach a net zero in the operating account.”

“Due to circumstances in the last year, the RJC did not actively engage in many of its regular fundraisers,” the letter noted, referring to the controversy over Rabbi Rosenblatt (no relation to this writer), who stepped down this past spring from the pulpit he held for more than three decades after many months of internal debate over whether he should be removed or allowed to stay.

The controversy was precipitated by a New York Times article in May 2015 about the rabbi’s unusual practice of showering and sitting in the sauna with boys, and later, young men, after playing racquetball with them.

His contract was converted into a retirement package, with payments spread out over time until 2032. The house he and his family have been living in, owned by the shul and valued at approximately $800,000, was given over to him. In all, the cost to the congregation of replacing the final years and obligations of Rabbi Rosenblatt’s contract, which was to end in August 2018, is between $2.1 and $2.2 million, Meyer Koplow, the rabbi’s attorney, told The Jewish Week last March.

He added that Rabbi Rosenblatt’s decision to step down was motivated by a desire for the congregation “to be able to grow and heal.”

That wish appears premature at the moment.

Some members of the congregation again are questioning what they consider to have been an overly generous package for the rabbi, and blaming it as the primary reason for RJC’s financial problems. Another key factor is that a sizeable number of families left the congregation over the rabbi’s behavior and the synagogue leadership’s response to the situation, which critics describe as inept. The families helped found a breakaway service, The Riverdale Minyan, which meets each Shabbat three blocks away at the Riverdale Temple, a Reform synagogue.

The annual rental fee is believed to be about $250,000, primarily coming from about a dozen active participants, including some who used to be major contributors to the RJC.

Despite attempts by RJC leadership to lure the former members back, the group recently voted to continue attending their own minyan, at least for now. “We want to see who the new rabbi will be and what direction the new lay leaders of RJC are taking,” one member of the minyan explained.

He and others interviewed, who preferred anonymity due to the sensitivity of the situation, gave the Bar-David letter high marks for its candor and financial transparency.

“That’s the kind of approach that could help bring us back,” the man said.

The RJC is in the early stages of deciding on a successor for Rabbi Rosenblatt, whose new post, working as a counselor at a suburban New York health center, has raised eyebrows in his community.

According to the website of Scarsdale Integrative Medicine, the rabbi is providing spiritual and psychological counseling at the Westchester practice. The website said he “recently retired” from the rabbinate but does not indicate why.