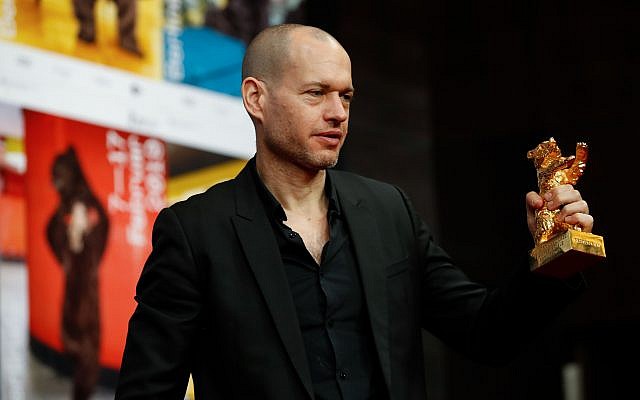 Israeli director Nadav Lapid poses with the Golden bear for best film for Synonymes during a press conference following the awards ceremony of the 69th Berlinale film festival on February 16, 2019 in Berlin. Odd ANDERSEN/AFP/Getty Images

As the years pass by, Israel continues to thrive, surpassing the barriers of technology, science and now film! The Israeli film “Synonyms” by Nadav Lapid has recently been awarded the Golden Bear for the Best Film at the 69th Berlin International Film Festival. This drama film depicts a story of a young IDF soldier named Yoav, who flees from his homeland to France in an attempt to find an escape from the difficult political situation in Israel. While Yoav struggles to maintain himself in a beat-up rental with minimal food, he attempts to truly self-identify himself.

Many critics claim this film to be anti-Israel and disrespectful towards the country. However, Lapid dismissed these statements when he accepted the Berlanite award by stating, “fury and rage and hostility and hate … are only the twin brothers and sisters of strong attachment and powerful emotions.” Lapid underlines that the harsh feelings that Yoav experiences only emphasizes the strong connection that he has towards the land of Israel, just as one often develops similar emotions to a fellow sibling. Lapid expresses his hopes of people understanding that the film is not a “radical political statement” directed at Israel, but it is a “human and existential and artistic statement.” It is, as Lapid says, a film about self-recognition and identification.

While I agree that the film is indeed a story of self-reinvention, I do not believe the self-reinvention should be shown in a way that criticizes the land of Israel. While the intention of the film may not have been to chastise Israel and all that it pertains, a viewer with very little or no prior knowledge of Israel might leave the film with biased negative feelings.

Nevertheless, despite contradicting opinions and beliefs, this film has not only won Israel’s first Golden Bear, but it has additionally won the title of the festival’s top film by the International Federation of Film Critics. Paired together, these awards are sure to have the ability to act as a major boost for Israeli arts and media!

Sarit Alkadaa is a senior at Yeshivah of Flatbush. She is a Staff Writer for Fresh Ink for Teens.