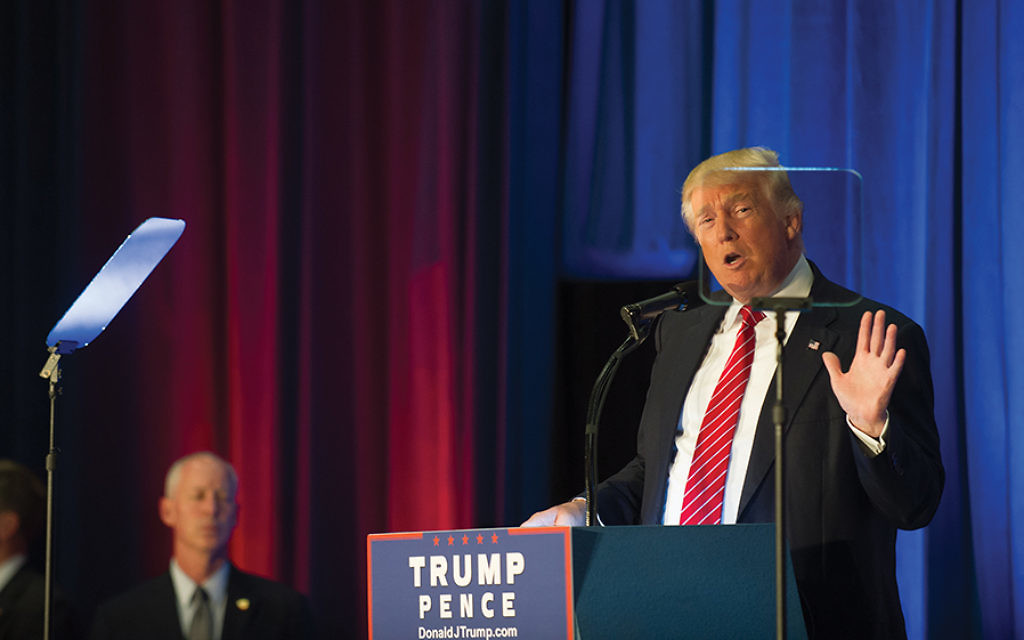 With less than three months before Election Day, Republican presidential nominee Donald Trump is causing such consternation in the Jewish community that many of the party’s major Jewish donors are shunning him.

To be sure, there are a few high-profile Jewish donors who are part of Trump’s campaign — most notably casino magnate Sheldon Adelson — but others appear to be sitting it out.

“I’ve spoken to several other board members and none of us are supporting him,” said a board member of the Republican Jewish Coalition who asked for anonymity because he was not authorized to speak for the group.

The website of the RJC, a group that says it is dedicated “to building a strong, effective, and respected Jewish Republican voice in Washington and across the country,” makes no mention of Trump on its cover page. In fact, there is not even a picture of him. Instead, there are a variety of photographs, including three of men defeated by Trump in the primaries: Wisconsin Gov. Scott Walker, New Jersey Gov. Chris Christie and Florida Sen. Marco Rubio. Only Rubio is seeking re-election in November.

Fred Brown, a spokesman for the RJC, declined to explain the webpage. He said Matt Brooks, executive director of the RJC, was unavailable for comment.

Into that void has sprung up a grassroots pro-Trump Jewish organization that in three weeks has garnered more than 1,000 supporters from 41 states and more than 58,500 visitors.

Called Jewschoosetrump.org, it features a picture of Trump giving the thumbs-up signal. The caption reads: “We are American Jews who believe that the Donald Trump/Mike Pence team will be good for America and good for Israel, our only democratic ally in the Middle East.”

Since the website was launched on July 25, about 1,050 Jews have sought to add their names online. But about 200 were refused when they declined to give their last names, according to one of the founders, Carol Greenwald of Chevy Chase, Md.

“People said, ‘I can’t give it to you because it will hurt my business, or I can’t take the social opprobrium it would cause,’” she said, adding that she understands their reluctance and would not put a Trump sticker on her own car.

“I know what will happen to my car — it would get keyed in the parking lot,” she said, adding that someone feared losing donations to his nonprofit if he gave his last name.

“Then he said, ‘Thank God it’s a secret ballot,’” Greenwald recalled. “The leftist tactic of smearing and bullying Trump has bullied into silence anyone who would support him. That’s why I started the site with five other people — I was outraged that people were made to feel embarrassed and had to defend themselves in the Jewish community for supporting the Republican candidate.”

“He’s brash,” Greenwald said of Trump, “but she [Hillary Clinton] is crooked,” appropriating a line from Trump himself.

Although there is reluctance among some Jews to openly support Trump, there appears to be no such hesitation on the part of white supremacists and neo-Nazis. Rocky Suhayda, chairman of the American Nazi Party, was quoted as telling a radio audience last month that a Trump victory would be a “real opportunity for people like white nationalists, acting intelligently, to build upon that…”

Meanwhile, fliers claiming to be from the Ku Klux Klan have been distributed in recent weeks on Long Island and in upstate New York calling for an end to “Zionist control of your government” and asserting that “Jews control the money in America.”

Evan Bernstein, New York regional director of the Anti-Defamation League, said in a statement that the “classic Klan hateful rhetoric … serves as a stark reminder that they still actively seek to disseminate their vile messages.”

Laurence Leamer, author of “The Lynching: The Epic Courtroom Battle that Brought Down the Klan” (William Morrow), the true story of a 1981 racial killing by two members of the United Klans of America and the subsequent trials that bankrupted the group, said he knows Trump personally and knows him not to be a racist. Nevertheless, he said Trump’s campaign is fueling bigotry in the U.S. because of his “George Wallace-like agenda.”

Trump has called for restricting Muslims and Mexican immigrants. Wallace — who ran for president in 1968 — held racist, segregationist views against African-Americans. Wallace’s campaign slogan was, “Stand up for America”; Trump’s is “Make America Great Again.”

Although Trump has disavowed the endorsement he received from David Duke, a former grand wizard of the Ku Klux Klan, Leamer said he “hasn’t come out against these people strongly enough.”

Asked about the anti-Semitic attacks on social media against Jewish journalists who were critical of Trump or his family, Leamer said: “Racism and anti-Semitism always go together. … Trump is not anti-Semitic or racist. Mar-a-Lago [a private club in Palm Beach owned by Trump] is an overwhelmingly Jewish club.”

Trump has also come under criticism for what he said recently – that “Second Amendment people” might take action against Clinton to stop her judicial appointments were she elected president. The son of assassinated Israeli Prime Minister Yitzchak Rabin, Yuval, wrote in USA Today that such rhetoric is similar to the “incitement [that] … led to the murder” of his father in 1995. And the ADL this week criticized his proposed “extreme vetting” of potential immigrants. It said on Twitter that refugee applicants are already extensively screened and that “suspending immigration would only trap those who need refuge most.”

In addition, Trump called for an “ideological screening test” to weed out those with “hostile attitudes toward our country or its principles,” which aides said would include questions about religious freedom and women’s equality.

Kenneth Jacobson, the ADL’s deputy national director, said the “values immigrants bring to the U.S. is a legitimate issue, but the solution is not banning them but making sure that once here they are educated in the right way.”

But Mel Lax of Dix Hills, L.I., a Trump supporter, said he supports such screening because “the ones who want to harm us typically want to do so based on their religion. How can you avoid asking if they believe in Sharia law and jihad?”

The Jewschoosetrump.org website includes comments from Trump supporters, many of whom like his strong stance on Israel, opposition to the Iran nuclear deal and believe he will “fix our economy and bring manufacturing and jobs back to America.”

Sid Dinerstein, former chair of the Palm Beach County Republican Party, said that based on the tens of thousands of attendees at Trump’s rallies he is convinced Trump will win.

“Despite a major thunderstorm in Fort Lauderdale this week, he filled 20,000 seats plus the seats on the floor,” Dinerstein said. “Broward County is the most Jewish county in the state and one of the most Jewish areas of the country – and heavily Democratic.”

Louis Sokol of suburban Houston, a founder of the website, expressed similar beliefs. He contrasted Trump’s crowds with those of Clinton and noted that social media said she recently canceled a Cleveland appearance because of feared low attendance.

“People believe the things he [Trump] is for, while the Democrats are saying the same things we have heard for the last 30 or 50 years,” he said.

Another website founder is Richard Allen of New York, who also founded JCCWatch, designed to “hold accountable” Jewish communal groups. He said Trump has “done positive things for the City of New York” for many years and is “very positive on Israel and the security of Israel.”

But Kenneth Bialkin, an RJC board member, said he has spoken with both campaigns and has still not made up his mind.

“There are still three months to go and a lot is going to change,” he said.