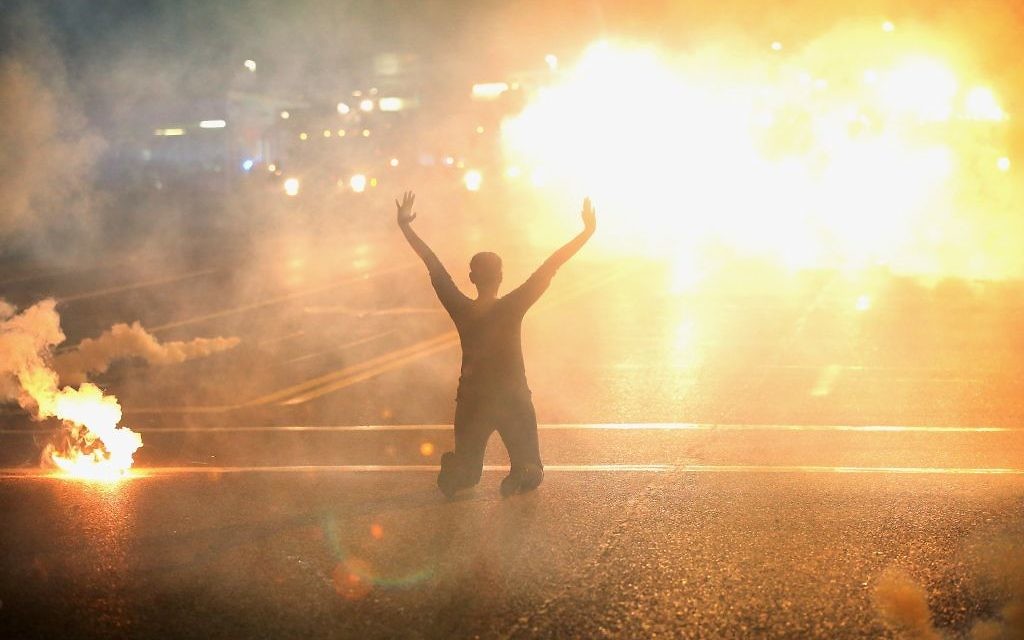 Protesters in Ferguson, Missouri have found an unexpected refuge — in a synagogue.

In response to the fresh wave of protests that broke after Monday’s grand jury decided not to indict Ferguson police officer Darren Wilson in the August shooting death of 18-year-old Michael Brown, Central Reform Congregation (CRC) of St. Louis is serving as a sanctuary space for protesters.

“I stand with the protesters because they are calling for a serious confrontation with institutional racism and I believe that we all need to do this work,” wrote Rabbi Susan Talve, spiritual leader of CRC, in a statement.

“I stand with the protesters because they have kept the peace for over 100 days by promoting non-violent civil disobedience and providing ways for many who are frustrated and angry to express themselves through marching, acts of civil disobedience and building memorials to those who have died, and by showing us what democracy looks like.”

On its website, the synagogue says it’s offering a “rabbinic presence, as well as volunteers and staff” to protesters. They will also be live-streaming prayer services.

“All lives matter. That's the first message the Torah gives us about human beings,” said Rabbi Rachel Kahn-Troster, director of programs at T’ruah, a rabbinic council that advocates for human rights and counts Rabbi Talve among its members. “Much of what we will hear in the days ahead will be about protester violence, but that is not the main story. The real story is that human beings are taking action to say that all lives matter.”

Rabbi Kahn-Troster encouraged others to show solidarity with the protesters through non-violent demonstrations, donating financial support to the protesters, and speaking out in local synagogues and Jewish communities.

Though T’ruah and CRC support only peaceful protests, violent conflicts with police have been rampant since Monday’s ruling. Dozens of building were set ablaze by protesters on Monday and protesters hurled bottles, batteries and rocks at police. Officers in riot gear responded by shooting bean bags and tear gas. Windows have been smashed and stores looted. CNN reporter Sara Sidner was struck in the head by a rock while reporting.

Since the chaos ensued, Ferguson police have made 29 arrests. There have been no serious injuries.

“The past three months have challenged us to ‘walk the walk’ as a congregation,” wrote Rabbi Talve. “As a community that embraces Jews of color, and has always been committed to challenging the injustices of racism in St. Louis, we could not stand idly by as Michael Brown's death touched a nerve throughout the nation.”