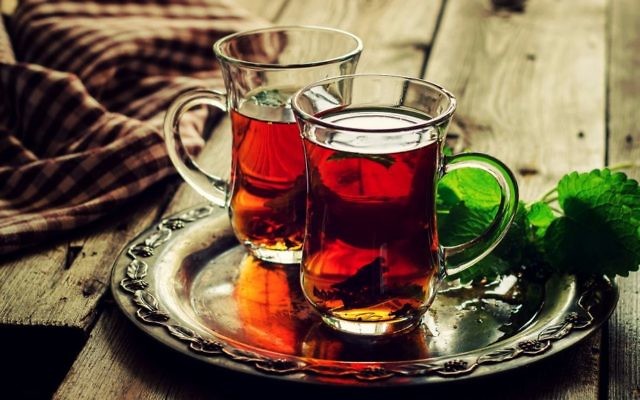 A couple weeks ago I turned 24. It’s not a particularly remarkable age. But as I finish my first year working full time and prepare for the start of graduate school, I find myself looking back on my childhood, noticing moments that gave shape to the different periods of my life. Certain memories float to the surface a bit faster than the others, ones that form an impression of youth, fuzzy at the edges, and bright with the colors that define what it meant to feel 5, 7, 10, and 14.

For me, those memories are of 1625 South Reeves St, the light pink walls of my bedroom, the way the cement walls of my elementary school would scratch my skin if I was pushed up against them while waiting in line for the water fountain, the navy, gray, and red of my plaid uniform, a time when I didn’t need glasses and my parents were married, my grandparent’s house before it was remodeled and – perhaps an odd memory to find floating amongst the rest – making tea for my father after dinner.

It was a habit that started when I was 9 or 10, old enough to be navigating my way around the kitchen alone. It wouldn’t happen every night – usually on Shabbat, or weeknights when his once chevrutah Rabbi Streicher came over to learn. I’d always use the Persian tea, the Sadaf brand that came in a dark green tea bag and had a hint of coriander, and add two teaspoons of sugar.

I’m sure I’m not the only daughter who’s made a cup of tea for her father after dinner, even amongst my non-Sefardi friends. But bringing tea to the man seated at the head of the table is undoubtedly a ritual that characterizes Middle Eastern homes. It’s a way of expressing respect and recognizing hierarchy – values that are deeply ingrained in my family’s heritage.

This is what I mean when I joke with my Barnard friends that my father IS the patriarchy. Making tea in the kitchen while men sit at the table is a textbook example of how cultures breed submissive daughters and wives.

It’d be all too easy to continue telling a story wherein my father was the tyrant who held me back from pursuing a fulfilling career and made me feel as if being married were the only valuable thing I could do with my life. Sadly, that is my mother’s story, but it’s not mine. (Her parents forbade her from becoming a psychologist, and when she announced that she wanted to get out of an unhappy marriage, her father responded that “divorce is a dirty word.”)

The truth is, I enjoyed the opportunities I had to make tea for my father. I think it gave me as much satisfaction to do something that he appreciated as it gave him nachas to be served tea by his daughter. These were often the moments in my childhood where I could sit with my father and he’d explain the book he was reading about the fall of the Ottoman empire after World War I, the halakhot of making tea on Shabbat, or what it means to refinance a loan on a house. Serving my father tea was as much a tribute to the patriarchy as it was a cultivation of my intellectual interests, and thereby a significant part of my feminist edification.

Of course, post-dinner tea became far more complicated once my real feminist “awakening” began at Barnard. I started to resent the fact that my brother was never expected to do anything me and my sister did. My father and I would fight about gender roles, women learning gemara, and whether or not a division of labor could make for a healthy marriage. More than anything, it infuriated me to no end that being served – whether it was tea, a cup of water, or dinner at the table – was something that gave him pleasure. I could not shake the conviction that this was a vestige of a patriarchal Middle Eastern world that was built on the backs of women in the kitchen.

All of those things may still be true, but, by my senior year, they stopped angering me the way they once did. In part because I was tired of having the same fights with my father every time I came home. But also because I started to recognize that – feminist or not – it makes me happy to do things for the people that I love.

In many ways the tea I serve my father is like my relationship with Orthodoxy – complicated. The lines between the rituals and traditions that make us feel connected and the ones that feel sexist or alienating are often quite blurred. Standing behind a mechitza and not counting towards a quorum is the most disenfranchising experience I’ve had in the Orthodox community. But the power of davening with a kehillah is also the very thing that keeps me coming back.

Perhaps the custom of a daughter making tea for her father is in indeed a vestige of the patriarchy, but it is not devoid of the other meanings it holds for me. And those are not things I’d willingly give up.

Shira Eliassian is a Program Manager at JOFA and Editor of JOFA’s blog. She graduated from Barnard College with a B.A. in English Literature and will be beginning an M.A. in Religion at University of Chicago Divinity School in the Fall.