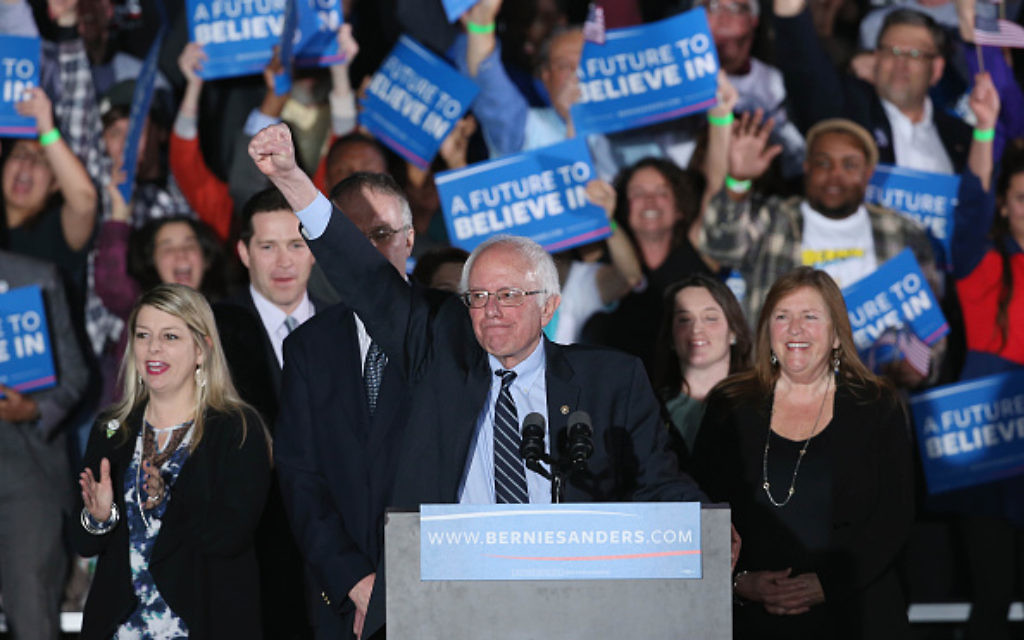 Concord, N.H. — As volunteers danced to 'Burn Baby Burn' and chanted ‘Bernie, Bernie’ to the theme from “Rocky,” a Sanders campaign spokesman praised the win as a milestone for American Jews.

“I think we can all feel great that we might have the first Jewish president,” Tad Devine told The Jewish Week at a raucous victory party after the Vermont senator became the first member of the tribe to win a presidential primary. (While Republican Barry Goldwater's father was Jewish, he was raised Episcopalian.)

It was therefore somehow fitting that Phish drummer and longtime Bernie Sanders supporter Jon Fishman was banging the drum this week at a Sanders rally and concert here.

Fishman was one of a crowd of musicians rocking out at a University of New Hampshire Students for Bernie Commit to Vote concert Monday night, just before voting started in the country’s first primary. Sanders would go on to handily defeat his Democratic rival, Hillary Clinton, winning in virtually every age group and capturing 60 percent of the vote to Clinton's 38 percent.

The 1,500 students listened — and sometimes sang along, jumped and swayed — to sets by the California-based Young the Giant, Matt Nathanson, Fantastic Negrito, Brooklyn-born Big Data, Emily Ratajkowski (with Fishman on drums) and Edward Sharpe and the Magnetic Zeros.

Fishman and Phish bassist Mike Gordon, both of whom are Jewish, are key members of the jam band, which formed in the mid-1980s at the University of Vermont and has a devoted and almost religiously fervent following in the Jewish community.

Fishman isn’t young anymore (he’ll turn 51 next week), making him a minority among supporters of the Brooklyn-reared and accented candidate, who are mostly young people. Whether they’ll turn out to vote is a key concern for the Sanders camp, since young voters traditionally don’t turn out to the polls in the same numbers as other age cohorts.

But they were out in force here Monday night at the Whittemore Center Arena.

The Vermont senator delivered a hoarse-voiced, truncated stump speech that got cheers from the crowd with its mentions of college debt, income inequality, pay equity, a woman’s right to “control her body” and the right of “our gay brothers and sisters” to marry. After the address, Sanders was treated to a heartfelt rendition by the crowd of “Feel the Bern,” a song written by Edward Sharpe and the Magnetic Zeros.

“Sanders is for us a semblance of hope and truth, and that’s hard to find in our day and age,” the group’s lead singer, Alex Ebert, told the crowd, which was primarily composed of people holding “Students for Bernie” signs, with some older supporters sporting “Bernie” buttons sprinkled among them.

And in a nod to Sanders’ revolutionary message, Ebert quoted early-20th-century Jewish anarchist Emma Goldman (who tirelessly fought against society’s inequalities), saying “A revolution without dancing is a revolution not worth having.”

Whether Sanders’ supporters will be dancing when the party leaves the friendly environs of New Hampshire and heads south to South Carolina, the next primary stop, is anyone’s guess. Pundits don’t believe Sanders can make the same impact in Charleston and Greenville as he has in Derry and Manchester, a stone’s throw from his home base in Vermont. (A Siena Research poll released Tuesday, in fact, found that in New York, at least, Democrats favor Clinton by more than 20 percentage points; among Jewish Democrats, Clinton garnered 41 percent to Sanders’ 33.)

But up here on primary day, Sanders racked up victories in the tiny towns of Dixville Notch, Millsfield and Hart’s Location, whose voters have the distinction of casting the first primary votes just after midnight. Sanders’ haul: 17 votes. Clinton got nine.

At a Dunkin Donuts in Bedford Tuesday, three elderly women interviewed were all over the map when it came to their favorites.

A white, middle-aged woman who described herself as an Independent, said, “Bernie is really well liked among the younger generation. My kids love him. He speaks a lot about college tuition.”
In fact, at the concert-rally at UNH, Sanders, a self-described Democratic socialist, asked for a show of hands of who in the crowd had student debt.

A woman who described herself as a Republican (and voted Republican in the primary) said nevertheless that she preferred Sanders over Clinton. “From the very first time [Hillary] was on TV, she looked sneaky. She’s done too many things.”

The third woman, a Democrat who was using an oxygen tank, favors Clinton. “I didn’t like it when Bernie was knocking on her.”

Which prompted this from one of the other women in the Dunkin Donuts: “Life was good for him [Bill].”

Over in Concord, a middle-aged man tinkering in his garage gave voice to a sentiment heard quite a bit in New Hampshire: that Bernie Sanders is honest.

“I like Bernie Sanders,” said Robert, who would only give his first name. “I certainly don’t like Billary. I can’t stand [Sen. Marco] Rubio. One of two things will happen if [Donald] Trump gets elected. He will change this country radically or start World War III.

“I think people are tired of the same old bureaucracy. People get in and promise the world. Like George [H.W.] Bush, no new taxes. And then he raises taxes. Bernie is honest and I think he’s going to at least try to do what he says he’s gonna do. ‘Yeah, I’m gonna raise taxes. But this is what I’m gonna do with the money.’ At least he’s honest.”

At the home of Len and Ellie Green, a Jewish couple in Bedford who describe themselves as “moderate to liberal Democrats,” the theme of Sanders’ honesty reappeared.
Both said they liked the Vermont Independent “because he is sincere.”

“I agree with what he wants to do,” Ellie said. “Hillary comes with too much baggage.”

While Sanders has not made an issue of his Jewishness on the stump, Len said he worries his membership in the tribe could lead to anti-Semitic rhetoric if he remains competitive well into the primary season.

Noting the success of Donald Trump’s anti-Muslim and anti-immigrant rhetoric, Len said he wouldn’t be surprised if some candidate decides to levy anti-Semitic sentiments against Sanders. “If Bernie gets farther,” he said, “I worry.”

“I think at this point," he mused, "Bernie’s [more like] your favorite grandfather.”

But at a nearby gas station, a 60-something Sanders supporter energetically disagreed.

“What's not to like about Sanders? He brings a lot of hope — We're taking on the establishment,” said the Concord resident, who has been volunteering for the Sanders campaign for the past six months.

“The Republicans talk about fear and war,” he continued. “He [Sanders] wants to get us out of wars. We have caused devastation in the Middle East. When our people come back we don't take care of them. It's mind-boggling.”

He spoke while shopping for snacks before heading to a local bar to watch the election returns. His outfit included an impressive collection of Bernie buttons on his jacket and hat.

For him, Sanders’ age is not a detriment but rather a marker of decades of experience.

“It's so remarkable that he was in the Civil Rights movement,” he said, adding that he doesn't "want to see a Hillary coronation."

He'd like to see Bernie come out on top, saying of the steadfast socialist,“He's been an underdog his whole life.”