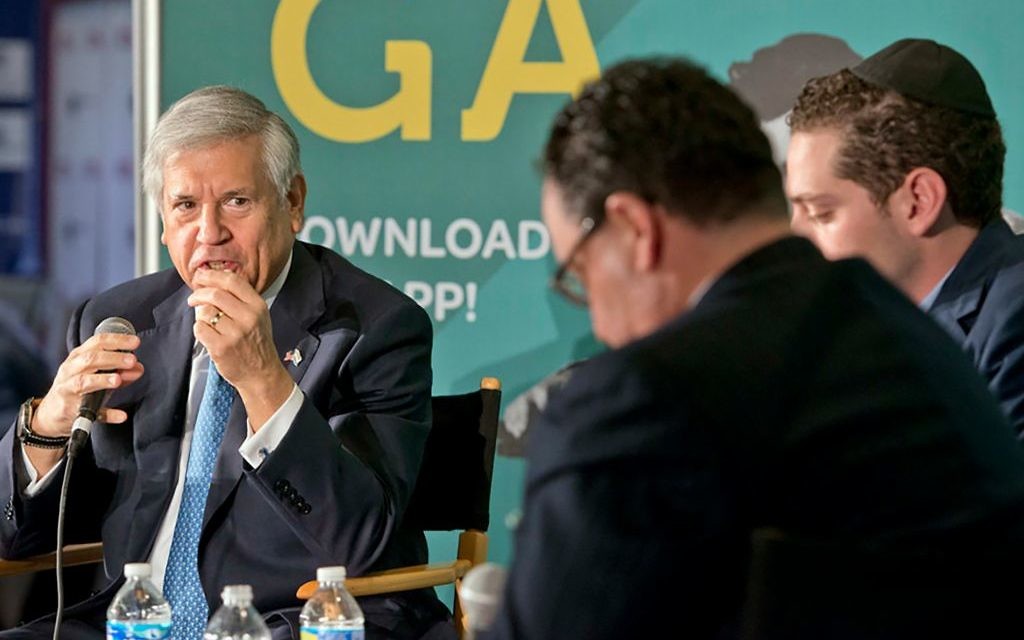 The Jewish Federations of North America distanced itself from a Jewish Democrat who said at the federation umbrella group’s annual General Assembly that some evangelical Christian Republicans support Israel in order to hasten the “End of Days.”

“Federations work closely with pro-Israel churches and church leaders across the continent,” Rebecca Dinar, the group’s spokeswoman, said Thursday when asked to respond to comments by Greg Rosenbaum, the chairman of the National Jewish Democratic Council. “We strenuously object to any characterization that calls into question their motives for supporting the State of Israel.”

Rosenbaum was speaking Tuesday at a debate with Matt Brooks, the director of the Republican Jewish Coalition, moderated by Jewish Insider. Brooks had noted the widening gap in polls between Democrats and Republicans over whether they identify more with Israel than with the Palestinians.

“Are their motives to support a Jewish Israel? Are they supporting Israel as a natural homeland for the Jews?” Rosenbaum said.

“Or are they in support of Israel because it represents the avenue for people who are evangelicals to get to heaven?”

“I’ve always said, you’ve got evangelical Republicans supporting Israel because they are building a stairway to heaven on the backs of the Jews in Israel. We don’t get to go with them unless – as Michele Bachmann said over the weekend – all of the Israeli Jews convert to Christianity, as soon as possible,” he said.

Bachmann, a former congresswoman and a vier for the GOP presidential nod in 2012, said last week during an Israel trip that Christians should anticipate the imminent return of Jesus by bringing more non-believers, including Jews, into their ranks.

Rosenbaum later sent Jewish Insider and Christians United for Israel a clarification of his GA remarks.

“To be clear, my remarks were meant to refer specifically to those evangelical Christians who agree with former Rep. Michelle Bachmann’s offensive statements surrounding Israel and the ‘biblical prophecy,’ specifically her call to convert as many Jews as possible in the context of ‘seeing the fulfillment of scripture right in front of our eyes, even while we’re on the ground,’” he said, “not the many Christians, both Republicans and Democrats, who disagree with her.”

Christians United for Israel, a group led by Pastor John Hagee, who has advocated within the evangelical community against proselytizing Jews, slammed Rosenbaum for his remarks.

“If he ever bothered to talk to pro-Israel Christians, Mr. Rosenbaum would learn that believing Christians support Israel for the same reasons as observant Jews,” David Brog, a member of the group’s board of directors, told the New York Observer.

“This support has nothing to do with salvation, which Christians believe stems from faith alone. Christian support flows from a moral worldview that can distinguish between Israeli decency and the evil of radical Islam.”