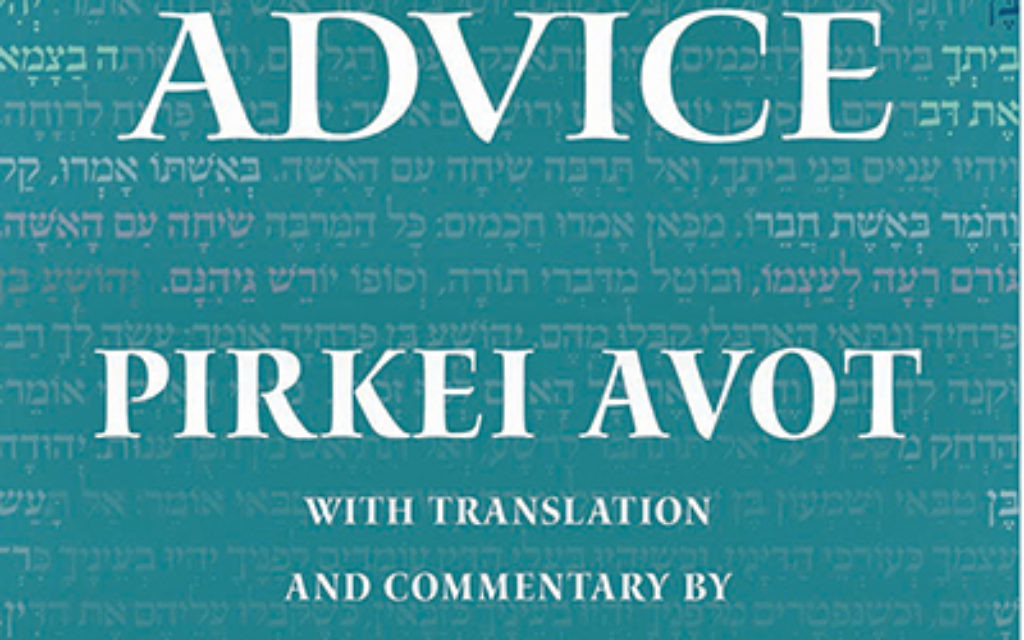 ‘Sage Advice” (Maggid Books) serves as the more than apt title for Rabbi Irving “Yitz” Greenberg’s new translation and commentary on Pirkei Avot, the classic volume of rabbinic literature that is itself a compendium of pithily stated reflections, observations and teachings drawn from the sayings of the rabbis (aka sages) who lived in the era of the composition of the Mishnah, around the third century CE.

The perennially popular text itself appears in most Jewish prayer books, and many scholars and rabbis have published their commentaries before.

But perhaps predictably — that is, to anyone familiar with his distinguished career as a scholar, teacher and institutional leader (he was president of the Jewish Life Network/Steinhardt Foundation from 1997-2007, and prior to that was for many years president of CLAL, The National Jewish Center for Learning and Leadership) — Rabbi Greenberg’s own brand of wisdom infuses the detailed yet accessible notes, explanations and annotations he provides.

In his first book since retiring from CLAL, Rabbi Greenberg wanted to reach a broad audience, he said in a Skype interview from his home in Riverdale. And what better venue than the oft-quoted contents of Pirkei Avot? (The title in English has many variants, including Ethics of the Ancestors and Sayings of the Fathers, among others.) Here you’ll find what might be called some of Jewish literature’s greatest hits: Hillel asking, “If not now, when?” Rabbi Tarfon instructing us, “You are not required to complete the work, but you are not at liberty to stand idly by.” The famous maxim to “make a fence for the Torah.” List your own favorite Jewish sayings — whether you’re aware of it or not, they may well have originated here, as well. “It’s like a box of candies,” says Rabbi Greenberg. “You can eat one or two, but if you can’t stop with one, that’s OK, too.”

But with so many other editions and commentaries available, why this new one now, and how does this one differ from the others?

One reason, Rabbi Greenberg writes in his introduction, has to do with the very nature of this best-known section of the Mishna. “Ethics of the Fathers was conceived as a book of wisdom for life: a guide to principles of good living, lessons of personal experience, models of desirable character traits, incentives to learning and mutual responsibility.” Times have certainly changed, but these teachings remain relevant, he argues, with lessons that will resonate for anyone in search of a balanced, purposeful life.

Rabbi Greenberg also takes pain in his introduction to explain his theological view of Jewish history. The development of rabbinic Judaism that began with the building of the Second Temple in about 300 BCE and continued until the completion of the Mishna’s redaction around 200-220 CE, he writes, reflected a fundamental change in the role of God and of humans in the brit, or covenant. Post-First Temple sacrifices and post-biblical prophecy, the Judaism that emerged was a more internalized faith that featured home-centered rituals and celebrations, promoted a more educated laity, and held Torah study as a central command. Pirkei Avot was especially edited to communicate those changes, he says.

Unlike the rest of the Mishna, he points out, Pirkei Avot is devoid of complicated ritual and legal explanations. Instead, he likens it to a kind of postscript to the Mishna, added by its editor and redactor Judah the Prince as a distillation of Jewish principles and values that could be understood and internalized by the entire community, not just by elite leaders and scholars. Rabbi Greenberg highlights these lessons further through his inclusion of brief sketches of the lives of all 66 rabbis whose sayings are included in Pirkei Avot. “They themselves provide role models,” he says, “and they are also fascinating stories in themselves that dramatize these values.”

For example, even though Hillel and Shammai disagreed on many points, the views of both men are included. This should be seen as a model for pluralism today, he believes, as there now exists what he describes as a “polarization within Judaism between no-change in the religion against almost unlimited change.” Yet the side-by-side differing opinions presented in Pirkei Avot put forth the idea that, “We may disagree, but we are all part of the Covenant,” Rabbi Greenberg says.

Picking favorites among the sayings is like choosing a favorite child, he says.

Rabbi Greenberg’s written commentary about the saying has a contemporary conversational flair: “God and religion should not be viewed as a vending machine in which you insert worship and obedience in order to get the good things in life.” Instead, “individuals should shift their religious psychology from a focus on reward and punishment for doing or not doing God’s bidding to a state of being motivated by one’s relationship with God and a desire to do good for its own sake.”

Another favorite comes from Rabbi Akiva, Chapter 3, Mishna 14: “The human being is beloved, for he was created in the image [of God]; even greater love [was shown by God] in that the human being is informed that he was created in the image of God.” Rabbi Greenberg explains his admiration for this passage, saying, “because in Judaism people are born with this value and integrity, but if they are in an environment that denies it or contradicts it they may not know it. So the even greater act of love is to tell you this. God is telling us that we’re valued and that we should not let anyone convince us that we are less.”

Asked about his favorites among the stories of the sages, the rabbi quips that they include “the usual suspects,” a list that begins with Hillel, Shammai and Akiva. You would not necessarily know from their sayings alone, he points out, that they were living through times of ongoing religious repression, political crises, revolts, rebellions and civil wars. Yet the rabbis dealt with this tragic historic situation, he believes, by articulating halacha and the spiritual traditions that would carry Judaism forward.

Such is the accumulated wisdom of Pirkei Avot that through the centuries has typically been studied on Shabbat in the weeks between Passover and Rosh HaShanah. It is a tradition that Rabbi Greenberg will continue to follow this year. “Sage Advice” is an exemplary study guide for anyone who wishes to do the same.

Diane Cole is the author of the memoir “After Great Pain: A New Life Emerges,” and writes for The Wall Street Journal among other publications.