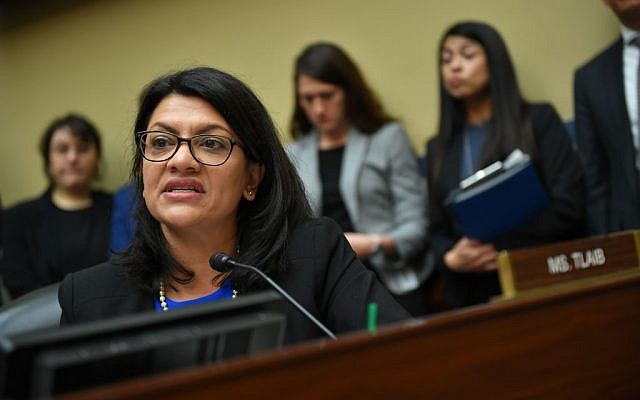 US Congresswoman Rashida Tlaib, Democrat of Michigan, questions Michael Cohen, US President Donald Trump's former personal attorney, as he testifies before the House Oversight and Reform Committee in the Rayburn House Office Building on Capitol Hill in Washington, DC on February 27, 2019. Getty Images

The nasty political polarization in Washington ratcheted up this week as leading Republicans attacked, and Democrats defended, comments on Israel made by Rep. Rashida Tlaib (D-Michigan). Both sides went overboard.

Tlaib, a Palestinian-American who calls for a one-state solution in the Mideast, said in a podcast: “There’s always a kind of calming feeling I tell folks when I think of the Holocaust…” She went on to attribute that feeling to knowing that Palestinians tried “to create a safe haven for Jews” after the tragedy.

Tlaib described the Holocaust as a “tragedy” and referred to “the horrific persecution of Jews across the world at that time.” But Republican leaders charged that she said the Holocaust gives her a “calming feeling.”

Going a step further, President Trump wrote on Twitter that Tlaib “obviously has tremendous hatred of Israel and the Jewish people.”

Democrats cried foul and said Tlaib’s words were taken out of context and demanded an apology.

But the Democrats tended to overlook the blatant historical falsity of Tlaib’s contention that Palestinians offered a “safe haven” to Jews. In fact, the Grand Mufti of Jerusalem collaborated with the Nazis and had a plan to exterminate the Jews in Palestine when the Nazis won the war. And of course the Arab states went to war to prevent the creation of a Jewish state.

Mideast expert Aaron David Miller had it right when he told CNN there ought to be “a ban on the use of Holocaust imagery in Washington politics” because “it always leads to misunderstanding and antagonism.”