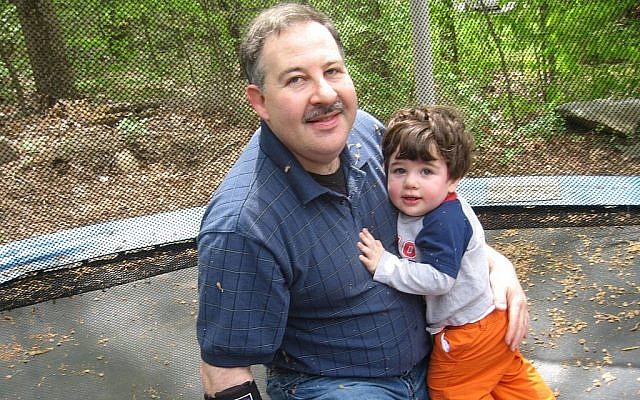 Lenny Pozner with his son Noah. (Courtesy/Via Times of Israel)

NEW YORK — Since a gunman took Noah Pozner’s life in the Sandy Hook Elementary School massacre, his father Lenny has lived a life on the run, trying to stay one step ahead of the conspiracy theorists.

Of the 20 first graders murdered Friday morning, December 14, 2012, Noah was the youngest. He and his twin sister had just turned six. After the mass shooting, Pozner, his then wife Veronique De La Rosa, and their two daughters sought privacy to mourn the very public loss. Unfortunately conspiracy theorist radio host Alex Jones as well as countless others of his ilk have had different plans for the family.

They claimed the 20 children and six adults killed at Sandy Hook were crisis actors, the shooting never happened, and the school was actually a film set. They claimed it was all a government plot to curtail civil liberties and the second amendment. But for Pozner, the most sinister tactic employed by these people — even more than their constant death threats — was their insistent claim that Noah never existed.

Pozner, 51, felt compelled to protect his son’s memory. He posted proof of his brown-eyed son’s life and death on the internet by way of his kindergarten report card and birth and death certificates. But due to the hate and personal threats, he and his family have been forced to move several times. Even now he’s preparing to move again: It will be the sixth time in more than six years.

Because of the tumult Jones and others have caused, Pozner decided to take on the conspiracy theorists. In 2014 Pozner founded the HONR Network to bring awareness to “the cruelty and criminality of abusive activity that victims and their families are shockingly subjected to following the violent mass tragedies like Sandy Hook.”

According to a 2014 University of Chicago study, nearly 50 percent of the American public backs at least one conspiracy theory. Researchers found the number had increased to 61% when they repeated the study in 2018. A University of Cambridge research team found similar results when they surveyed British citizens.

Conspiracy theorists, or “truthers” as they call themselves, spread rumors such as that former president Barack Obama isn’t an American citizen, that Hillary Rodham Clinton ran a sex-trafficking ring from a bathroom in a pizza restaurant and that 9/11 never happened. 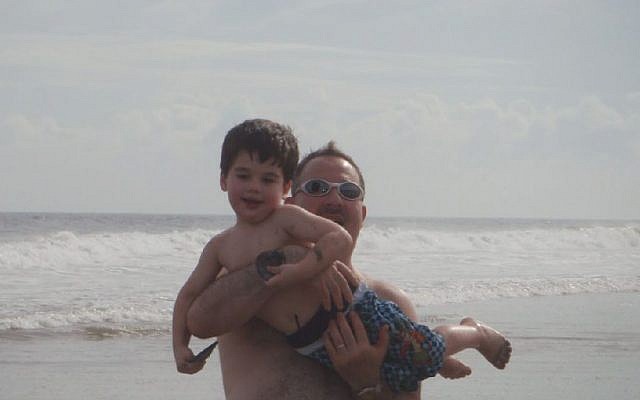 For the Pozners, there has been some measure of justice.

Florida resident Lucy Richards was recently convicted and sentenced to five months in prison and a further five months of house arrest for leaving death threats on Pozner’s cellphone. Pozner and his ex-wife also sued Jones for more than $1 million for defamation. The case is going through federal court in Austin, Texas.

Additionally, in 2018 HONR Network reported 2,568 videos to YouTube and had 1,555 expunged. The nonprofit has also gone after those spreading conspiracy theories about the Boston Marathon bombing, the Aurora Theater and Pulse Night Club shootings.

Even so, Pozner and De La Rosa have found social media platforms slow to act. Last year the two wrote an open letter to Facebook CEO Mark Zuckerberg to implore the company to remove people such as Jones.

“We are unable to properly grieve for our baby or move on with our lives because you, arguably the most powerful man on the planet, have deemed that the attacks on us are immaterial, that providing assistance in removing threats is too cumbersome, and that our lives are less important than providing a safe haven for hate,” they wrote.

The following conversation was edited for brevity and clarity. 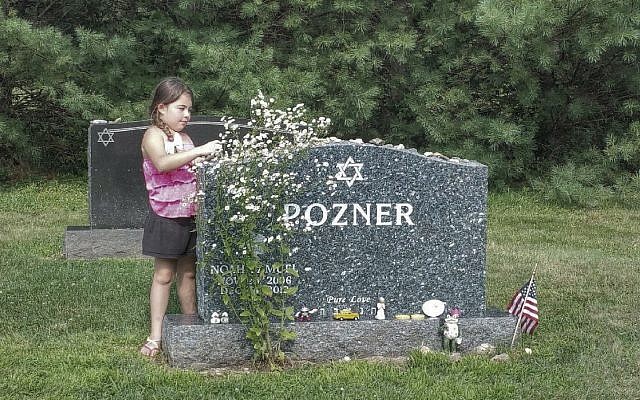 You wrote eloquently about how grief is a personal process, yet you were forced to do it in such a public way. Can you talk about how the conspiracy theorists and hoaxers stole your family’s ability to grieve?

Our ability to grieve was hijacked in part by the nature of Noah’s death. The entire country grieved, the funeral became a media spectacle. We just didn’t have the privacy and quiet needed to fully grieve. But, of course, the attacks by hoaxers were so shocking and unexpected, we were blindsided. I learned very quickly that there isn’t any meaningful divide between offline and online abuse anymore.

You wrote a letter with Veronique in 2018 to Facebook asking why they hadn’t booted Alex Jones. What steps have they taken since then to reign in these kinds of conspiracy theories, hate speech, and the like?

After the open letter to Mark Zuckerberg, Facebook has taken steps to recognize victims of mass casualty events as a protected group, which has always been one of the core goals of the HONR Network. While Facebook doesn’t divulge their internal efforts to make their platform safer, we do work with content moderators and policymakers at Facebook and I certainly appreciate that our relationship has evolved.

My goal in the coming year is to get more involved in policy decisions with all online platforms, see victims of mass casualty events protected throughout the internet, and to provide educational content that will help people identify and avoid hoaxer material online.

Some proponents of free speech say they would rather have the haters, the conspiracy theorists where we can see them rather than go underground – how do you respond to that?

I am a proponent of free speech. I also have a legal right to be free from harassment, free from defamation, free from attack, and someone’s “right” to free speech doesn’t take priority over my rights. 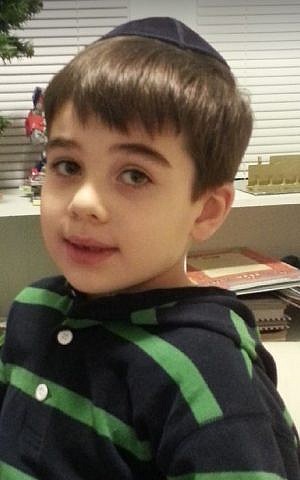 Noah Pozner was the youngest child killed in the Sandy Hook shooting. (Courtesy/Via Times of Israel)

The challenge with supporting conspiracy theorists and hoaxers existing out in the open is that being online legitimizes their position. It enables them to reach out to and engage with innocent, easily led, or mentally ill people who can be indoctrinated and manipulated with much greater ease. That is exactly what has happened. In most cases, it isn’t the original hoaxer who is issuing death threats, videotaping children, or doxing [publishing private information about] my family — it’s the followers.

Do you hear from others targeted by conspiracy theorists, such as family from Parkland or the Pulse Night Club ?

Why did you come to oppose debunking conspiracy theorists and hoaxers?

Initially, I focused on providing proof to people who had heard the hoaxers and were on the fence about the tragedy. In August of 2014, we shifted our focus to content removal and have been extremely effective. Debunking is about convincing hoaxers, and since they are either motivated by financial gain or are deniers, no amount of proof is enough.

What would you like the general public to understand about the damage hoaxers do?

Hoaxers pollute the truth, they incite hatred and harassment and attempt to rewrite history to fit their own agenda. But perhaps more importantly to the average person, when these types of persecutions are allowed to occur online, sooner or later they themselves can be targeted, their family members can be targeted, their business or livelihood can be targeted. It is the embodiment of the Martin Niemoller quote [“First they came…”]. If you sit silently watching while others are being victimized, there may be no one left to help you when you become the victim.

From your perspective what would you like to see law enforcement — on the federal, state and local level — do to better deal with low level cybercrime?

It is important to clarify. I don’t see cybercrime as “low level.” Anyone who has ever experienced cybercrime doesn’t consider it “low level.” This is how law enforcement tends to think of cybercrime, that it isn’t important. The fact is, this type of crime destroys a victim’s personal and professional life. With most crime, once the attack is over the healing can begin, but with cybercrime of this sort, there is no end to the attack. Posts and photos can stay live for years even decades, continually victimizing a person.

Additionally, law enforcement must be trained to understand that the divide between offline and online crime no longer exists. We accept crimes perpetrated online (harassment, defamation, bullying, terrorizing, and cyber-exploitation), that we would never accept offline. Law enforcement often fails to recognize the very real offline effects. Police are still telling people to “turn off the computer” as a way to protect themselves from online crime, which is ridiculous and completely ineffective.

To date, we have focused on efforts to making victims of mass casualty events or mass publicized violence a protected class. This would prevent hoaxers and others from further attacking victims or using the victim’s name or likeness to promote their personal agenda.

Because so much of the coverage focuses on December 14, 2012, and the days afterwards we don’t talk about the way those who died lived. What was Noah like? What he was excited about? What were some of his favorite things to do, read and play? 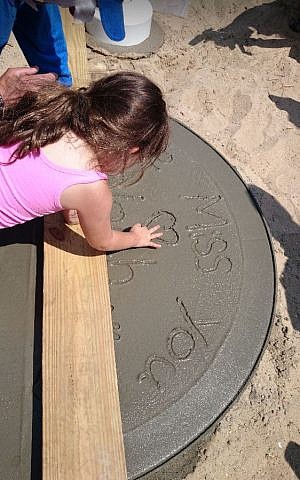 Noah was an inquisitive boy, full of life and wonder. He always wanted to know the “hows” and “whys” of things. He was very caring, he loved animals and his family. Of course, he had a special bond with his twin sister. He loved superheroes and trucks and playing outside. He was just a delightful, energetic, joyful little boy. You couldn’t help but smile when you were around him.

Tell me a little more about how your hope that Noah’s lasting legacy will take the form of increased rights for victims.

Families in grief have the right to do so in peace and dignity. That has been my position since day one. Regrettably, victim’s families are being cheated out of this basic human dignity, and being subjected to unspeakable harassment on an ongoing basis. These predators use victims’ vulnerability and grief to further their own agenda, increase their bank account, or simply as a sick sport. It is my hope that the work that I do in Noah’s honor will ultimately neutralize these predators’ ability to use the internet to inflict further harm to people who have committed no crime, and simply want to be left alone to grieve their loved ones and live out the rest of their lives in peace.