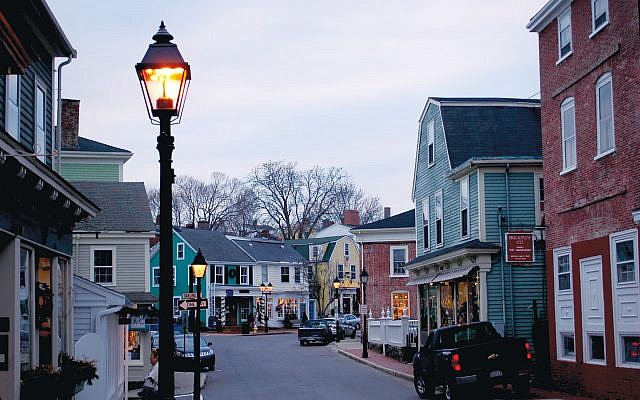 I’m an absolute sucker for historic New England towns, especially those along the Massachusetts seacoast. And I can think of no place more historic than Marblehead, which occupies a windswept peninsula on Boston’s North Shore.

About a half-hour’s drive northeast of Cambridge, Marblehead embodies that quintessential New England blend of Colonial-era charm — in the first U.S. census of 1790, it was the 10th-largest settlement — and no-nonsense grit.

Winters are harsh along this craggy shore, whipped by the Atlantic from three sides. Yet generations of Jewish families have savored the warmth of the North Shore’s tight-knit communities, settled by Eastern European immigrants back in whaling days.

More recently, the area’s most famous Jewish resident may be a fictional one: Rabbi David Small, of the popular Rabbi Small detective series (“Friday the Rabbi Slept Late”), written by Marblehead resident Harry Kemelman in the 1960s. Something about Marblehead’s expansive ocean views, sailboat-filled harbor and soulful skies seems to inspire literary output; Eugene O’Neill is also among the many writers who have called Marblehead home.

Fall is arguably the loveliest time of year here — especially this fall, as a stretch of mild weather has kept foliage green well into October. The vintage stoops of downtown Marblehead are at their most picturesque, festooned with pumpkins and corncobs. The only downside is that you have a lot of company from Halloween enthusiasts, who flock to witchcraft attractions in the neighboring town of Salem.

But who needs a haunted house when you can tuck into kosher falafel and authentic Israeli sabich? Those specialties, along with Jerusalem bean soup and excellent hummus, draw crowds at the vegetarian and Chabad of the North Shore kosher-certified Adea’s Mediterranean Kitchen, a Salem hotspot that opened, ironically, shortly after the closing of the town’s last synagogue a few years ago.

Jewish friends in Marblehead, which has two very active synagogues and a Jewish day school, told me they appreciate the closeness of their community — not only in social terms, but also geographically. Many Jewish families have settled in neighborhoods on the southern shore, near the Reform Temple Emanu-El and the Conservative Temple Sinai (several other congregations, including Chabad of the North Shore, are in neighboring Swampscott).

Visitors, however, will spend most of their time in Marblehead’s historic district. On a sunny morning, it’s a pleasure to stroll across the green and browse the small boutiques that line downtown sidewalks. Stately clapboard manses in barn red, dusty blue and colonial gray, many boasting columned façades, could easily feel like an open air museum were it not for the down-to-earth, workaday feel of the place.

To go deeper into four centuries of New England history, allow time to explore the Marblehead Museum, which spreads over three downtown locations within easy walking distance of each other.

Across the street, rotating exhibits of vintage art and maritime artifacts are on view at the J.O.J. Frost Gallery. From there, it only takes a few blocks walk to fast-forward 100 years at the Civil War G.A.R. (Grand Army of the Republic) Museum, which illuminates Marblehead’s role in that 19th-century conflict. There’s a small but worthwhile exhibit of Civil War uniforms, muskets and even drums played by the Union Army band.

Around the Marblehead point — past rocky coves, light houses and beaches — is another historic site worth the drive: House of the Seven Gables, built in 1668. The setting for Nathaniel Hawthorne’s 1851 novel (Hawthorne’s own birthplace, also a National Historic Landmark, is nearby) celebrates its 350th anniversary this year with a slate of spooky-literary programs in its delightfully creaky wooden mansion and surrounding gardens.

Those odd-numbered gables command one of the most spectacular views in New England, overlooking the half-moon bay of Salem Harbor. By the water’s edge is a Colonial-revival seaside garden, planted with medicinal herbs, year-round blossoms and species mentioned in Hawthorne’s novel, including the lilac bushes that famously shrouded the house in shadow.

Even if witch kitsch is not your thing — and it definitely isn’t mine — it’s hard not to thrill to the spooky charm of Boston’s North Shore, where the ghosts of history, literature and Jewish lore are waiting around every turn.