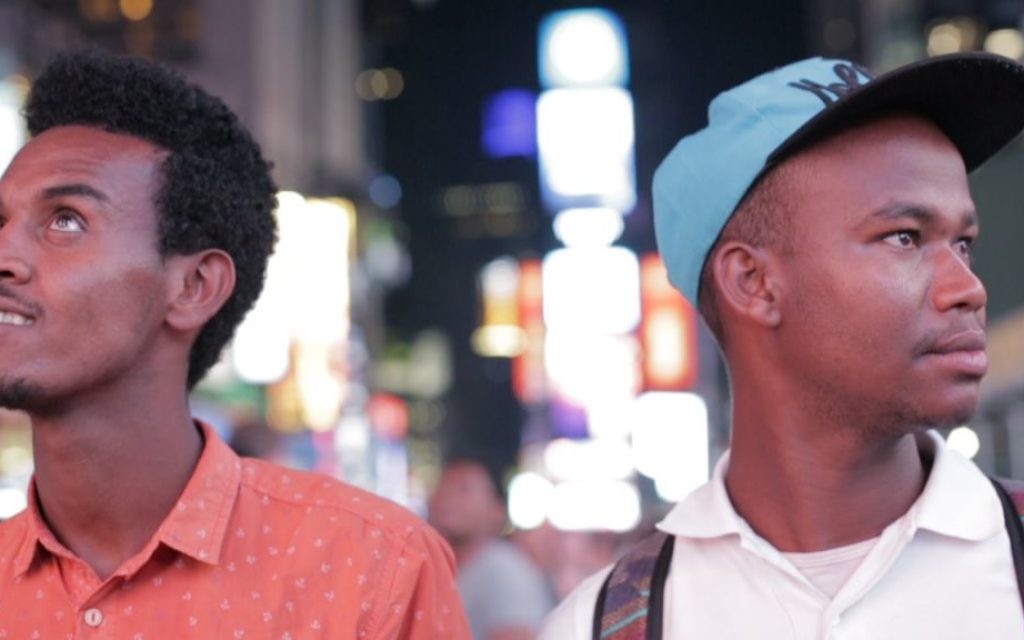 Demoz Deboch, a member of a family of subsistence Jewish farmers in rural northern Ethiopia, left his village for the first time at 11, when everyone in his family moved to Gondar, the largest city in that part of the Ethiopian country. They sold their possessions, leaving their land and life behind, to live near a small Jewish compound in Gondar while waiting to immigrate to Israel.

That was 13 years ago. They’re still waiting.

Deboch left his homeland for the first time last week, when he traveled to the United States to call attention to the plight of his family and other members of his community who have Jewish roots and are stranded in Ethiopia. They number approximately 9,000.

Deboch, now 24, came here accompanied by Gezahegen Derebe, 21, a longtime friend in the Ethiopian Jewish community who also is hoping to settle in Israel. The pair are in the U.S. for a month under the auspices of an ad hoc group of 50 rabbis and other leaders of the Jewish community assembled by David Elcott, professor of practice in public service and leadership at New York University’s Wagner School of Public Service who formerly served as the American Jewish Committee’s director of interreligious affairs.

The two members of Shearith Yehudei Ethiopia (Hebrew for “The rest of Ethiopian Jewry”) — the name preferred by the community over Falash Mura, a Ge’ez term with negative connotations — are speaking out at Jewish venues around the country, including synagogues, community centers, federations and summer camps.

“They understand our problem,” Deboch said.

His message: the 6,000 men and women in a compound in Gondar, and the 3,000 in Addis Ababa, the capital, have waited long enough.

“Our country is Israel,” Deboch said in an interview at The Jewish Week. “That is the right place to live. We have many relatives in Israel.”

Alternating between English and fluent Hebrew, he and Derebe described how they grew up in Jewish families who were unable to practice Judaism because of prejudice in the majority-Christian country; how they have spent more than a decade in the compounds that have turned into transit camps; and how they spend their days as late-start high school students learning the basics of Judaism and preparing for life as Israelis.

Some older members of their community, they said, work at low-salary jobs as weavers and pottery makers.

Deboch and Derebe each wore on his head a knit kipa crotched by members of their community in Ethiopia, and they spoke of themselves as “we Ethiopian Jews.”

They are accompanied on their U.S. travels by Elcott, who began his humanitarian-political mission after visiting Ethiopia two years ago, and by Ryan Porush, a young journalist who is making a documentary about their activities in this country and about the wider subject of Ethiopian Jewry.

Elcott said he and his wife, Rabbi Shira Milgrom, went to Ethiopia on a personal visit to see the end of “the last aliyah of Ethiopian Jews” after a series of on-again, off-again decisions during the last few decades to bring the remaining Jews in Ethiopia to Israel. It was understood that Jerusalem was going to accept all those who had qualified to join their relatives. The compounds set up in Gondar and Addis to serve those seeking to make aliyah were going to close.

Elcott asked Deboch, “When exactly are you leaving?”

The list of people about to depart for Israel, he was told.

In speaking with many Ethiopians, Elcott learned that they had not qualified to go to Israel; they were staying behind in their homeland; they had no hope or advocates.

Through his circle of well-connected friends in the U.S., he has raised some $50,000 to keep the compounds open and bring the young men here, and he has initiated a petition campaign to pressure the Israeli government to “do what needs to be done.”

The petition, which Elcott began circulating last week — it already has “hundreds and hundreds” of signatures, he said — calls upon Israel to let the 9,000 Ethiopians “join their families and live fully as Jews in Israel.”

“We are mystified at why the Israeli government would want to undermine a righteous and appropriate policy of kibbutz galuyot [bringing home those yearning to return to Israel],” the petition states. “We are committed to helping ensure that the State of Israel welcomes Jews of all colors as it fulfills the prophetic call” to further the ingathering of Jews from around the world.

Elcott’s lobbying efforts are the latest chapter in the story of Israel and Ethiopian Jewry.

Most Ethiopians recognized as Jews by Israel — and by many prominent rabbis — were brought there in 1984 and 1991 airlifts — around 22,000 people — and Israel’s population of Ethiopian Jews has since grown to around 135,000. But the fate of those commonly known as Falash Mura, who largely stayed behind in Ethiopia, who are descendants of Jews who were pressured to convert to Christianity more than a century ago and whose authenticity as Jews is in doubt, has remained open to question. Some rabbinic authorities in Israel reject claims of these Ethiopians’ status of Jews, and there are Ethiopian Jews already in Israel who have asserted that some newcomers continue to practice Christianity.

Since written records are rare in Ethiopia and the Ethiopian Jewish tradition recognizes Jewish status on the father’s side — unlike traditional Judaism, which recognizes matrilineal descent — most Ethiopians who arrive in Israel now take part in an official conversion process.

Israel, partnering with the Jewish Agency, has repeatedly appointed commissions to study the issue, sent official delegations to Ethiopia to interview applicants, adjusted its eligibility requirements and the number of eligible Ethiopians, and announced that it was bringing the last of the eligible ones to Israel.

But each time the Ethiopians have arrived in Israel, with great fanfare, more Ethiopians claiming Jewish roots have turned up in Addis and Gondar, hoping to be next.

The latest chapter: though the commission he appointed was unanimous in approving those waiting in Gondar and Abbas, Prime Minister Benjamin Netanyahu announced there would be no more aliyah from Ethiopia, citing the high cost and a budget shortage. Demonstrations on the streets of Jerusalem ensued. Two members of Netanyahu’s Likud party, including one born in Ethiopia, boycotted voting in the Knesset for two months as a form of protest, jeopardizing the government coalition. In June, Israel announced a resumption of the aliyah, starting with 1,300 in June, with the rest coming over the next five years.

Not fast enough, according to Elcott; families remain separated, and some Ethiopians are still awaiting approval for eligibility to settle in Israel.

“There is no [other] place for them,” Elcott said.

“We didn’t expect to be in Gondar so long,” Deboch said.

He and Derebe look forward to serving in the Israeli Army; Deboch hopes to become “an ambassador for Israel.” Derebe’s ambition: “to become a doctor.”

“Always we hope that it [permission to leave Ethiopia] will be tomorrow,” Deboch said.

The next time he leaves, he added, he will head 1,612 miles northwest — the distance between the Addis Ababa national airport and Tel Aviv.