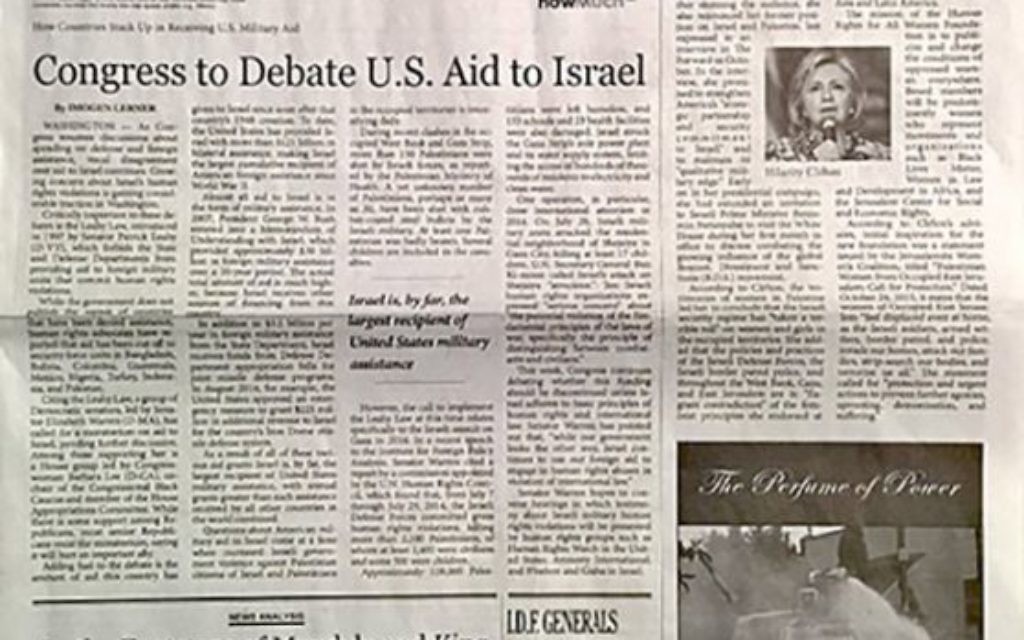 No, Hillary Clinton has not quit her race for president to advocate for Palestinian rights. Sen. Chuck Schumer is not calling for the end of U.S. aid to Israel. And The New York Times is not searching for a new publisher to end its biased, pro-Israel reporting.

A sophisticated, fake four-page supplement to The New York Times featuring those “stories” and others promoting the Palestinian cause and denigrating Israel was distributed in Manhattan on Tuesday, and The New York Times is not laughing.

The supplement includes phony anti-Israel ads, made no mention of a sponsoring group. And while one of several young women distributing the propaganda near the Port Authority Bus Terminal in Midtown Tuesday morning told this reporter, when asked, that “this is a supplement of The New York Times,” the paper of record had nothing to do with it.

“We’re protective of our brand and other intellectual property and object to this group (or any group’s) attempt to cloak their political views under the banner of The New York Times,” according to a statement from Eileen Murphy, senior vice president of communications at the paper. “We believe strongly that those advocating for political positions are best served by speaking openly, in their own voice.”

On Wednesday, Jewish Voice for Peace took credit for the supplement.

The handout featured a box above The Times logo that read, “Rethinking Our 2015 Coverage On Israel-Palestine — A Supplement.” In the upper left-hand corner was a spoof of The Times motto, reading “All The News We Didn’t Print.”

The online version of the phony paper has been taken down but can be seen here.

Anti-Defamation League CEO Jonathan Greenblatt called the mock issue “deceptive” and welcomed the Times’ statement objecting to the effort to fool the public.

“The diatribe, published anonymously, conveys false facts and themes consistent with anti-Israel advocates and supporters of the Boycott, Divestment and Sanctions movement,” he said.

Clearly, it was a costly and carefully orchestrated project, which is almost identical in appearance to the real thing. Copies were delivered to some Manhattan residential buildings where they were included, unintentionally, with the day’s copy of the “real” Times at the front door of tenants’ apartments.

Shahar Azani, executive director of StandWithUs Northeast, commenting on the “supplement,” noted that “the U.S.-Israel alliance is strong and founded on shared values and strategic interests. Any attempt to subvert it is doomed to fail.” He added that “spreading lies and demonizing Israel will not bring peace to both parties,” which will only come through “direct dialogue and education. It is a shame there are those who chose to waste paper and contaminate the environment with unwarranted garbage.”

If nothing else, a read through the “supplement,” with its “Editorial” calling for an end to the distortions in The Times’ coverage of the Israel-Palestine conflict, may convince some pro-Israel readers that not everyone sees the paper’s Mideast coverage as slanted against the Jewish state.

Note: This story was updated on Feb. 3 to include that Jewish Voice for Peace has taken credit for the supplement.