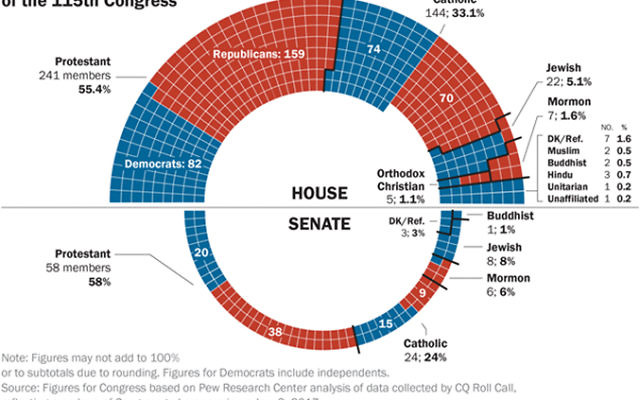 The 115th Congress, which was sworn in this week, is more Jewish — and more Christian — than the general U.S. population. And new Jewish members of Congress are the largest group of any non-Christians serving for the first time.

Those are among the findings of “Faith on the Hill,” a study of representatives’ religious affiliation released this week by the Pew Research Center.

According to the study, based on data supplied by CQ Roll Call and follow-up Pew phone calls, while adults who identify as religiously unaffiliated — the so-called “nones” — constitute 23 percent of the general public, they make up only a fraction of a percent of Congress.

Pew studies have shown that “it would be a liability” for a candidate to espouse no religious affiliation or no belief in God, said Greg Smith, who coordinates Pew’s polling on religious issues.

In other words, it’s bad politics, especially in the South, to be seen without a religious faith. “We don’t have data on [members of Congress’] religious beliefs or practice,” only that they identify with one religion or another.

The figures for the overall percentage of Jewish members of Congress, which have hovered between 5 and 8 percent in the last generation, contain no surprises; they have consistently stayed above the share of Jews in the overall U.S. population — 2 percent.

Of the 62 members of the freshman class of the 115th Congress, half are Protestant and about a third are Catholic — of the remainder, 8 percent are Jewish.

The Jewish contingent in the House grew from 19 to 22. Five Jews were newly elected to the House, while the Senate Jewish contingent dropped from nine to eight. Jewish candidates who won seats as Democrats were Josh Gottheimer, in New Jersey’s 5th District; Brad Schneider, in Illinois’ 10th; Jacky Rosen, in Nevada’s 3rd; Jamie Raskin, in Maryland’s 8th; and Republican David Kustoff, in Tennessee’s 8th.

“It’s perfectly clear that in the 21st century Jews can be elected from places where the number of Jews is very small, where the Jewish vote does not matter,” said Jonathan Sarna, professor of American Jewish history at Brandeis University. “America has reached a point where to be a Jew [running for office] is normal.” Witness the presidential candidacy of Sen. Bernie Sanders and New York Sen. Chuck Schumer as Senate minority leader.