If Al Gore actually did invent the Internet, as he once claimed, he would be the least popular guy in any ultra-Orthodox neighborhood. It is clear that the fervently Orthodox Jewish leaders really despise the Internet and technology because they're willing to spend over $1.5 million in a rally against it next month in Queens, New York. 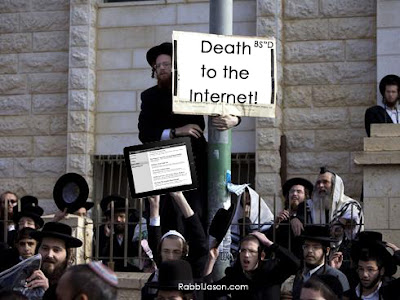 Ever since the Web became popular in the mid-1990s, the ultra-Orthodox community has railed against it. Ultra-Orthodox, or Haredim consider the Internet as threatening to their strict way of life. They believe it promotes the ills of society and has the force to steer its devout members off the path of religious observance.

In the past, some ultra-Orthodox rabbis have attempted to issue a complete ban on Internet use. In some cases their rulings were motivated by the easy availability of pornography that is so pervasive on the Web. In other cases rabbis have forbidden Internet use because they consider it a secular act with secular content that will contaminate their communities. Most Haredi rabbis don't consider the educational advantages of the Internet and tell their students that using technology is a bitul z'man — a waste of time that could be used for religious studying.

Many Haredi yeshiva leaders have condemned Internet use in sermons and some ultra-Orthodox neighborhoods display posters in the streets promoting the Internet ban. Over the years, there have been some attempts in the ultra-Orthodox world to create an alternative Internet so that Haredi adherents could use email and use the Web for religious matters like booking a flight to Israel or purchasing a book. Special "kosher" search engines and web portals, like Koogle, have come and gone over the years in efforts to offer safe Web surfing to pious Jews in Haredi communities.

The Jewish Daily News today reported that tens of thousands of participants will take part in a huge rally on May 20 (Erev Rosh Chodesh Sivan) "in order to combat the evils of the Internet and damage of advanced devices." Presumably by "devices" they mean mobile technology like smartphones and tablets. A rally organizer told the Jewish Daily News that the rally will be the largest in the history of Orthodox Jewry in the United States.

While there's just no telling just how many ultra-Orthodox Jews will actually show up at the May 20th rally against the Internet and technology, it is a safe bet that the event won't be live tweeted or depicted with Instagram photos — at least not by the very people rallying against such technologies. Personally I can't imagine how the organizers will ever begin to promote an event of this magnitude without the help of Facebook or other social networks.