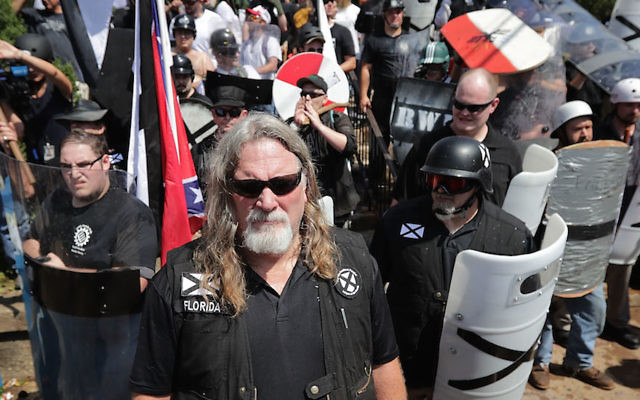 White supremacists exchanging insults with counterprotesters as they attempt to guard the entrance to Emancipation Park in Charlottesville, Va., Aug. 12, 2017. Getty Images

(JTA) — Facebook and Instagram announced a ban on posts that involve “support and representation of white nationalism and separatism.”

The social networking giant announced the ban on Wednesday and will begin enforcing it next week.

“It’s clear that these concepts are deeply linked to organized hate groups and have no place on our services,” a post by Facebook, which owns Instagram, said. “Our policies have long prohibited hateful treatment of people based on characteristics such as race, ethnicity or religion — and that has always included white supremacy.”

Facebook did not at first extend that ban to white nationalism out of concern that it could also end up censoring movements like Basque separatism or pride in the United States. But conversations with experts convinced the company that “white nationalism and separatism cannot be meaningfully separated from white supremacy and organized hate groups.”

“Going forward, while people will still be able to demonstrate pride in their ethnic heritage, we will not tolerate praise or support for white nationalism and separatism,” the post added.

Facebook also announced that it would begin connecting people who search for hateful terms to resources that help people leave hate groups.

Last year, Facebook CEO Mark Zuckerberg sparked backlash when he said the site would not remove posts denying the Holocaust.