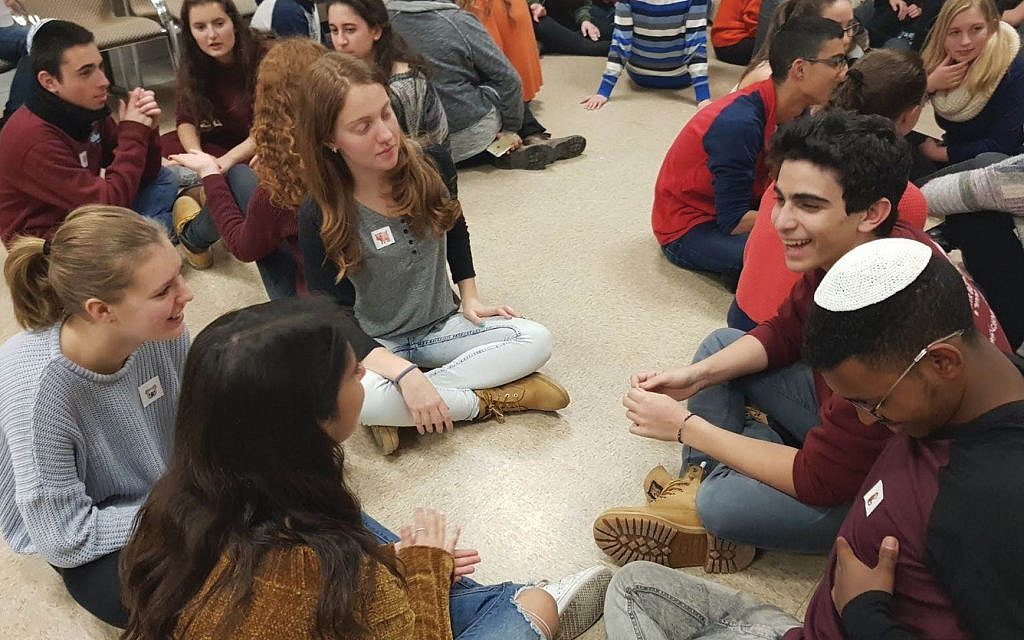 Students in Haifa taking part in activities that bring them closer to their American Jewish counterparts. Courtesy of Gesher

‘Israel is the Jewish state and belongs to the entire Jewish people.” That’s what I told a visiting delegation of American lay leaders that I was asked to address. “American Jews have held up their share of the responsibility, but Israel has not reciprocated. We, as a strong nation, need to recognize our obligation in playing a bigger role in this partnership.”

Although I believed this for a long time, only recently did I realize that we need to articulate this wherever and whenever possible. For many in Israel, this is not as clear as it is to me. And it wasn’t always so clear to me. But that all changed after I participated a little bit over a year ago in a course run by Gesher, a nonprofit that works to bridge gaps in Israeli society, in partnership with UJA-Federation of New York. The course opened my eyes and challenged me to use my position to improve relations between Israel and diaspora Jewry.

In my role as head of education in the Haifa municipality, I can help inform and influence our next generation. I work in various centers relating to culture, education and community services in the city of Haifa. Meeting with educational leaders who serve in similar roles in the New York Jewish community showed me the immense opportunity we have to work together and use education as the bridge between Israeli and American Jews.

Already, since the beginning of this school year, I have partnered with the Ministry of Education to implement multiple projects within the classrooms in my municipality. By establishing educational programming for our students, both physical and virtual, on the subject of diaspora Jewry, we are ensuring that our future leaders will learn and actively interact with their brothers and sisters across the world and will recognize that they are all a part of one whole.

For example, we have implemented “Brothers Across the Sea,” an interactive three-year program for students in four junior high schools in Haifa. The purpose of the program is to introduce Israeli children to the diaspora, both on a personal level and in general. The students learn about the meaning and difficulty of preserving their Jewish identity outside of Israel and the characteristics of the various Jewish communities around the world. The program is carried out through videos featuring students in the diaspora who are the same age as the students in Israel.

After watching the videos in which the diaspora students present themselves and their Jewish way of life to the children of Israel, various questions and discussions ensue in the classroom. “How hard is it to express your Judaism in a class full of those from other religions? Is there really anti-Semitism where you live? Do you like the Lakers or the Clippers?” The questions not only deal with Jewish subjects, but also enable the developing of real personal relationships between the two groups. All of a sudden, diaspora Jewry is not just a subject in the textbook, but Joseph, Charles and Rebecca, whom we just spoke to last week in class.

I’ve been amazed by the questions these students bring up on the subject of Jewish peoplehood and how various cultures relate to their Jewish identity. By engaging with those students who are in the same grade with similar hobbies and overlap, Jews around the world are becoming infinitely closer and we are providing the next generation of students with the knowledge, tools and values to ensure a shared partnership with one another and internalize its importance.

And it’s not just the students who are broadening their horizons and strengthening their connections to Jews around the world. “I never really thought about Jews outside of Israel,” said Vered, a seventh-grade teacher in Haifa. “To me, learning about Jews outside of Israel always ended with our Holocaust studies. But since we introduced the new curriculum, I can’t imagine our school not teaching about our Jewish brothers and sisters and their communities around the world. It provides such a strong recognition on the part of our students to the chain of Jewish history. We, us here in Israel and Jews around the world, are both links in that same chain.”

Ilan Vaknin, principal of the Kiryat Haim High School, Haifa’s largest high school, told me: “Diaspora Jewry is part of our flesh and we are bound to it by the bonds of love. Our history has shown us that Jewish people survived only because of the unity that characterized us and helped us through some difficult times. The learning process and the meetings in our classrooms preserve our partnership and our relationship with our brothers in the diaspora.”

Another program that the Haifa municipality has partnered with in the last year is the JCC Diller Teen Fellowship, a leadership development program for Jewish teens in the United States that promotes diaspora and Israeli teen exchanges. This serves as another meeting point for our students in Israel to engage with teens from the United States. This program provides both sets of students with a unique model for getting to know the other’s Jewish identity and creates a lasting connection with students from the “other side.” I’ve learned through my students that “Jewish” and “identity” go hand-in-hand with many American Jews, who have minority status in their country, while “Jewish identity” is not something Israeli Jews think about because they are the majority group in their country. I believe deeply in the power of personal relationships, coupled with face-to-face dialogue to bring the Jewish people around the world closer to one another.

This is all a continuation of our successful partnership between Haifa and Boston, which has for many years been promoting ties between schools in the two cities.

By engaging face-to-face and meeting with Jews of different cultures through educational programming, diaspora and Israeli students are able to see Israel and their Jewish identity as something that unites them and represents a shared future. I feel strongly that these discussions and personal interactions are the key towards building a strong link between Israelis and Jews around the world.

I plan on expanding these programs to even more schools in Haifa and hopefully around Israel next year and beyond. I hope that the next time I speak to a visiting American delegation, I can say that we in Israel care about American Jewry as much as American Jewry cares about us. ✡

Ilana Trock is the director of the Division of Education, Culture, Sports and Social Services in the Municipality of Haifa.