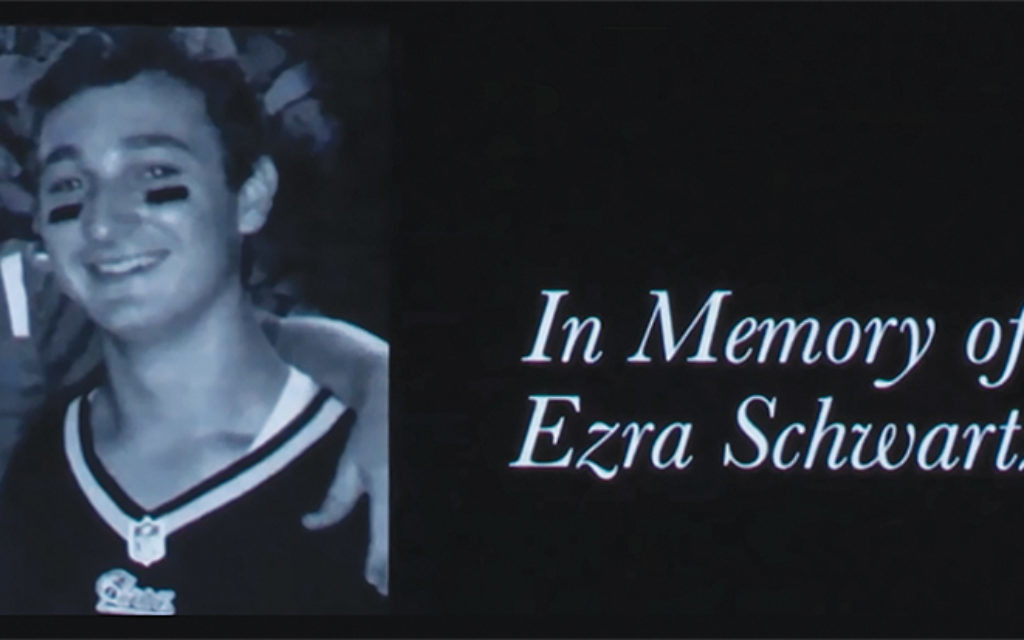 Several days before he was murdered in a Palestinian terror attack, Ezra Schwartz, the American teenager who was studying at Ashreinu, a yeshiva in Beit Shemesh, expressed a commitment to learn all of the Tanach (Hebrew Bible) during the coming year.

He never had the opportunity.

But last Thursday evening a memorial tribute was held at Ashreinu, attended by more than 1,500 fellow gap-year yeshiva students in Israel. The young men and women taught each other passages from the Tanach, and by evening’s end they made a siyyum, or commemoration, in Schwartz’s memory on completing all 24 books, according to Laurence Schreiber of Teaneck, N.J., who helped co-found the small yeshiva four years ago.

The hastily arranged program was cosponsored by Ashreinu, The Jewish Agency’s Masa program and several organizations, including the Orthodox Union, its National Conference of Synagogue Youth, and Yeshiva University. It included reflections and music from the Ashreinu students, inspirational words of Torah from faculty and a videotaped message of comfort from Prime Minister Benjamin Netanyahu.

In addition to eulogizing Schwartz for his warmth, caring and commitment, speakers pledged defiance of terrorists and called for greater unity among Jews.

An example of that unity was evident two nights later, Schreiber noted, as a charedi community in Kiryat Sefer dedicated a Torah in Schwartz’s memory and welcomed a number of his schoolmates from Ashreinu.

Former Knesset member Dov Lipman, who spent a gap year in Israel when he still lived in America, was emcee of the Thursday night program and spoke at the Kiryat Sefer event as well, noting that it should not take a tragedy to bring charedi and other Jews together.

New England Patriots owner Robert Kraft arranged for a moment of silence to honor Schwartz before last Monday night’s nationally televised game in Foxboro, Mass. The scoreboard displayed a photo of the 18-year-old, who lived in nearby Sharon, smiling and wearing a Patriots shirt. The stadium announcer noted that the tribute was for Schwartz, “a huge Patriots fan,” and hundreds of others who lost their lives in terror attacks.

Kraft paid a shiva call to the Schwartz family the next day, and President Obama and Secretary of State Kerry each made personal calls to Schwartz’s parents to offer sympathy.

But some in the Jewish community felt the public expressions of condolence from the administration were measured, and late in coming. On Friday, Nov. 20, the day after the terror attack, the Conference of Presidents of Major American Jewish Organizations issued a statement expressing disappointment that there had been no word from the administration “despite the death of an American citizen.”

A few minutes later the State Department did issue a statement, which had been in the works. But it was criticized by some as perfunctory and too even-handed. The message condemned the terror but added the need for “affirmative steps to restore calm, reduce tensions and bring an immediate end to the violence.”

“Why was the implication that it is incumbent on all parties — including Israel — to prevent the violence that killed Schwartz?” wrote JTA Washington correspondent Ron Kampeas.

And the parsing of administration responses to terror attacks continues, comparing distinctions between those targeting Israelis and Jews and those aimed at others.