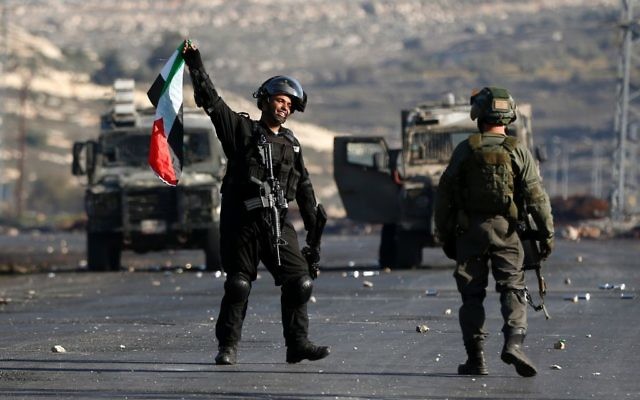 Suppose you read in today’s newspaper that a heavily armed gang had run amok inside Israel, demolishing “Yossi Cohen’s” home, among others, and abducting some of the residents – including children – before anyone could stop them.

Suppose that Yossi Cohen and his neighbors began to fight back. Suppose that they had wounded and killed some of the gang. Suppose, finally, that in the midst of their struggle, they killed a young man who, though not actually participating in bloodshed, was bringing provisions to those who were.

Would you expect the American press — to say nothing of the Jewish press — to mourn the perpetrators and their supporters? Would you expect to hear a clergyman denounce the defenders of their neighborhood, and call on “religious leaders” to “step up” and “recognize there is never, ever a justification for violence”?

But all of it happened. With only one difference: The resistance I just described is occurring not in Israel but in occupied Palestinian territory, where IDF soldiers and settlers have killed more than 85 people and wounded some 9,000 more since the beginning of October.

I should stress at once that I join in the mourning for Ezra Schwartz, who was reportedly in the occupied West Bank “to distribute food to [Israeli] soldiers.” His killing — like all killings — was a tragedy. It was also a crime. But saying that much, under the circumstances, isn’t enough. No one can truly mourn such a tragedy without mourning all those who have been murdered through the brutality of Israel’s illegal occupation of Palestinian land — particularly since the gunfire that killed Schwartz was almost certainly intended as retaliation for Israel’s oppressive actions.

Let’s take just one example: Shortly after midnight on Nov. 15, Israeli forces blew up an apartment belonging to a Palestinian accused (not convicted) of killing an Israeli, thus destroying the home of the accused’s innocent wife and children; the explosion also damaged two other apartments that were home to several people, including two minors. When some neighbors protested, the soldiers opened fire, killing two people and wounding dozens more, including a 17-year-old boy, who was critically injured. According to some news reports, the Israelis then fired tear gas at ambulances that were trying to reach the wounded. That happened a week ago. Have these crimes received the attention given to the killing of Ezra Schwartz?

Jewish newspapers aren’t alone in applying a double standard to Israeli and Palestinian suffering. The New York Times’ Isabel Kershner heralded the day of Ezra Schwartz’s murder with the dire words, “Thursday was the deadliest day in the recent wave of violence.” So it was — if only Jewish deaths count as “violence.” Just a month earlier, Israel killed six Gazans in a single day, and within 24 hours had killed another two Palestinians.

Maybe because I’m an Orthodox Jew, I want to express my own reaction through the medium of a Jewish story. This one tells of a rabbi who, as a starving young student, was turned away from the door of a wealthy Jew where he’d asked for a little food. Years later — now a famous scholar — the rabbi is honored with a lavish meal in the home of the same wealthy man. Instead of drinking the wine, however, the rabbi pours it on his shirt. He repeats the maneuver with the soup, and then with everything else he is offered.

Finally, he explains to the stunned host (who does not recognize him), “I came here once before, in rags, and you said you had nothing to give. Today you offered me generous hospitality. I asked myself, What has changed? I’m the same person I was when you turned me away; the only difference is that today I’m wearing better clothes. So it must be the clothes you meant to honor with your hospitality, not me. That’s why I fed only my clothes — not myself.”

If we mourn only Jewish deaths and ignore the victims of Israel’s brutal occupation, if we editorialize against violence only as part of Palestinian resistance and not as part of Israeli terror, then we don’t really care about human beings or abhor violence; we only care about the kipa someone happens to be wearing or the Israeli flag he carries. And if that’s the case, we haven’t reached the moral level expected of human beings — or of Jews.

Michael Lesher, a writer and lawyer, is the author of Sexual Abuse, Shonda and Concealment in Orthodox Jewish Communities (McFarland & Co., Inc.). More information about his work can be found on his web site www.MichaelLesher.com.