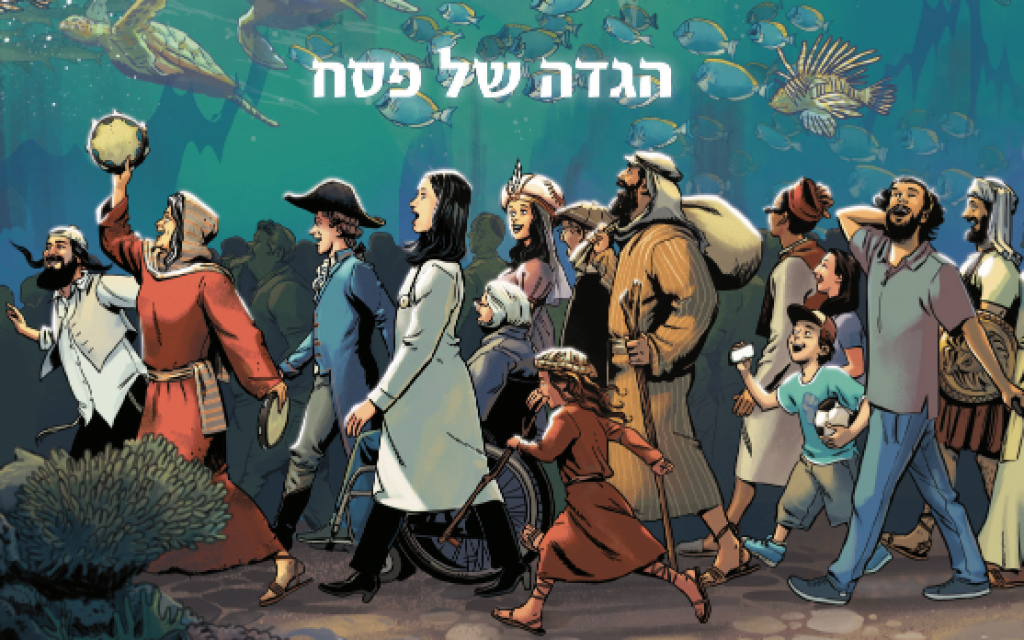 Gorfinkel’s haggadah tells the story of Passover in graphic form. Pictured here, a portion of the cover. Courtesy of Koren Publishers

On Passover, which commemorates an ancient story of liberation, a popular cartoonist has freed the narrative in a thoroughly modern way.

If ever a story carries a novelistic sweep and packs a visual punch, it’s the Exodus story. In it, the Israelites break free from hundreds of years of bondage in ancient Egypt, moving through the marsh grasses of the Red Sea as the reeds rise up to clear an escape route.

In a sign of the visual and attention-challenged times, Jordan Gorfinkel, whose “Everything’s Relative” strip appears in this publication, has combined the epic Passover story and indelible images into a Haggadah that seems tailor-made for millennials, “Passover Haggadah Graphic Novel” (Koren Publishers). In recent years, while there have been niche Haggadahs for vegetarians, the politically minded, even “Star Wars” and Harry Potter fans, Gorfinkel’s new work is believed to be the first graphic novel to tell the biblical tale in comic strip format.

The Exodus story, Gorfinkel told The Jewish Week, has “everything you want: larger-than-life characters and conflicts, sweeping settings, mammoth action sequences, memorable personal moments.” And, of course, “a happy ending … especially if you don’t mind sand in your shoes,” he quipped.

But how to tell the story, which must be retold in every new generation, according to tradition, for this generation? 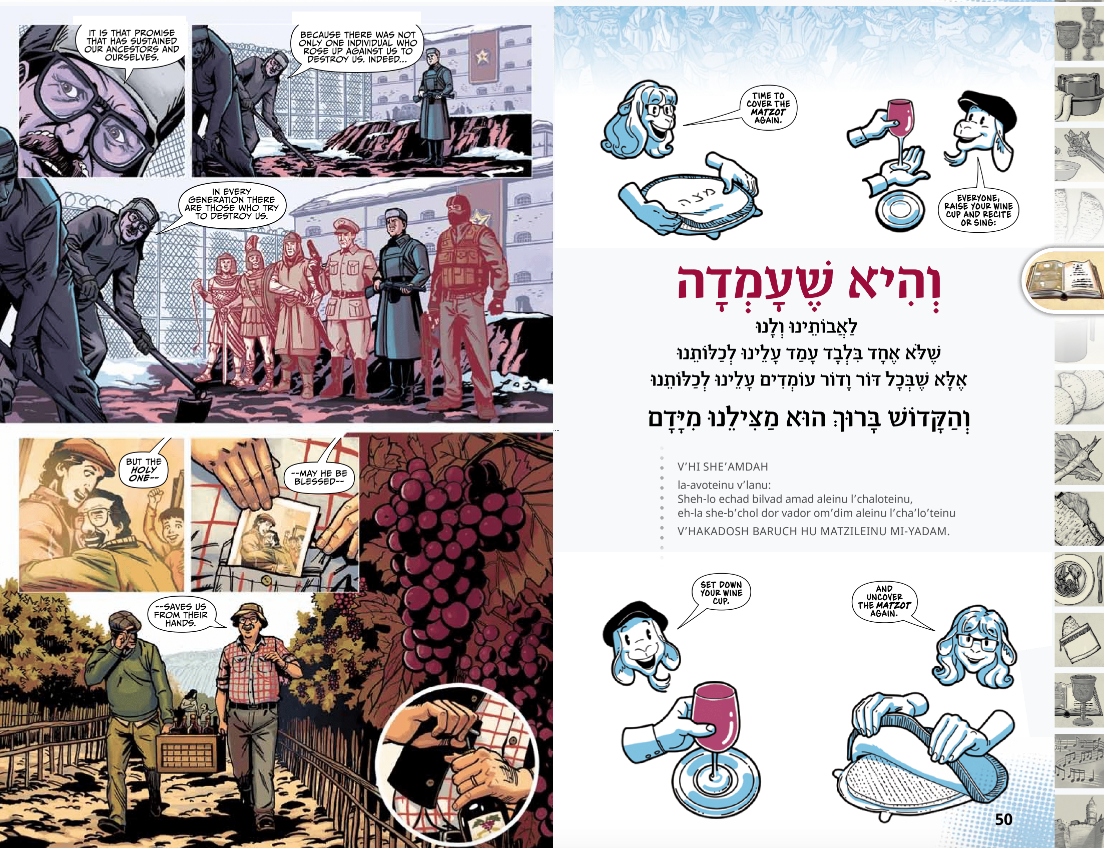 “The Haggadah is not a chronology,” he said. “Rather, it’s a terse summary of the sweep of Jewish history, theology, etc. that presumes a level of scholarship that contemporary Jews, living well after the age of the oral tradition, mostly do not possess.”

Gorfinkel’s dilemma was “how to dramatize what to modern eyes reads as disjointed in a structure that fits how we’re accustomed to consuming content today. I had to figure out how to enforce a narrative on the Jewish equivalent of a Wikipedia page.”

The vehicle for that narrative, which Jews around the world will gather to retell in two weeks, is a family of goats. On page one of “Passover Haggadah Graphic Novel,” a father goat, on seder night, asks his daughter about the meaning of Pesach.

“Freedom …?” answers the precocious but impatient kid who’s in a hurry to get to the meal. On page 2 comes the 2019-ish snark: “Children,” the daddy goat says, “aren’t the only ones with questions. The Haggadah confounds adults, too. Hence, the Passover Graphic Novel.” Wisecracks the daughter goat, “No one says ‘hence’ anymore, you know.”

As the title suggests, the 170-page book, three years in the making, is two books in one. It contains the traditional Hebrew text of the Haggadah (transliterated into English letters), in easy-to-read fonts, and a modern English-language translation by David Olivestone, former director of communications at the Orthodox Union, as well as “how-to” instructional cartons that lead the reader through each step of the seder. And it is also an exquisite full-color graphic novel drawn by Israeli artist Erez Zadok, a Bezalel Academy of Art graduate, that features the unnamed goat family going through each step of the seder. The illustrations, which incorporate modern cityscapes and mythic biblical scenes, carry the story forward as it moves from the exodus from Egypt to Jewish life and history through the ages. 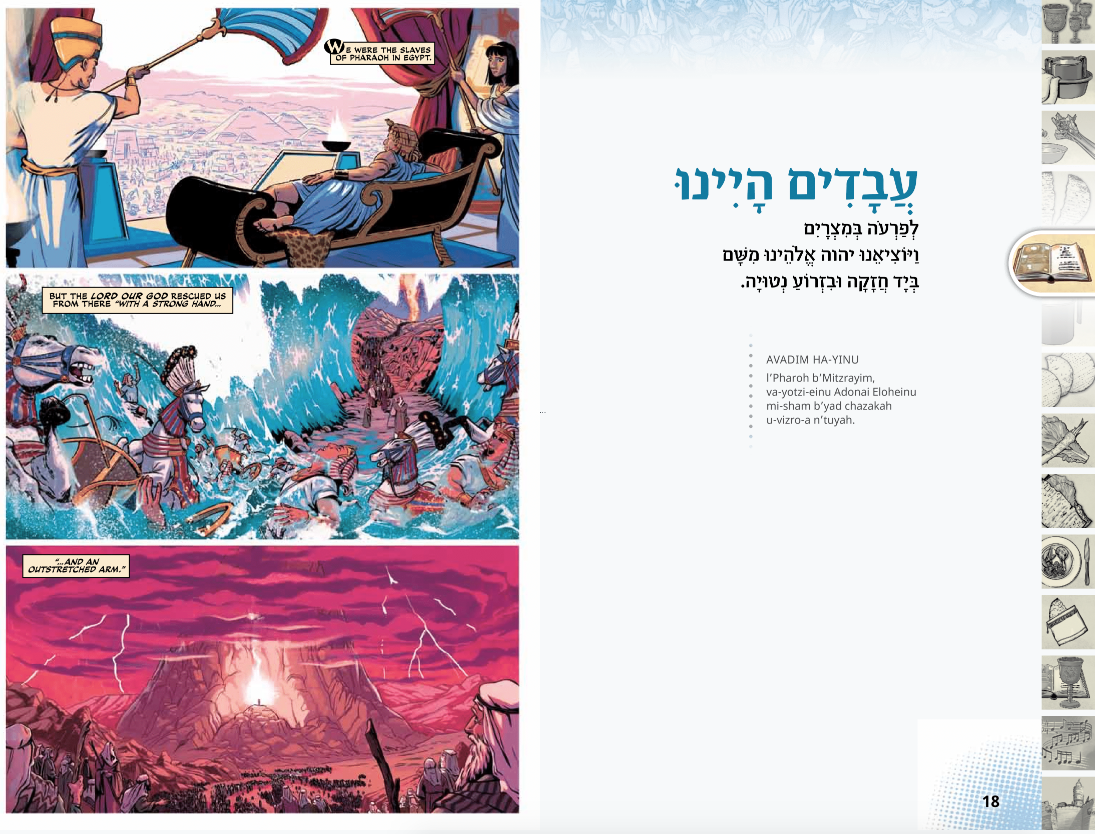 “The story boards are really clever and engaging,” said Daniel Levine, the longtime owner of J. Levine Books & Judaica in midtown, who added that he has “never seen a Haggadah like this” — one rendered as a full-length graphic novel. “In my 40 years [at the firm] this is the most captivating and creative one I have seen.”

Though a groundbreaking graphic novel like Art Spiegelman’s Holocaust classic “Maus” might seem a natural influence, Gorfinkel said the idea for a Haggadah in graphic novel form “just sort of happened” and was a natural growth of everything else he had previously done artistically.

Though an accomplished artist — with decades of experience of drawing the Batman comic — Gorfinkel wrote and envisioned in exacting details every word and every scene in the graphic novel part of the book, but chose to assign the drawing to another artist.

Busy with a career as an illustrator and businessman (he runs his own creative studio, Avalanche Comics Entertainment, which provides custom content for corporations and other clients) and musician (he produces and performs in independent CD releases), he realized he could not devote enough time to the execution of a project of this scope to do it justice.

Along the way, Gorfinkel, a Cleveland resident who lived for a while on the Upper West Side of Manhattan, was also responsible for fundraising a “six-figure” budget for the book, through connections in the Jewish community and some selective online crowd-funding. 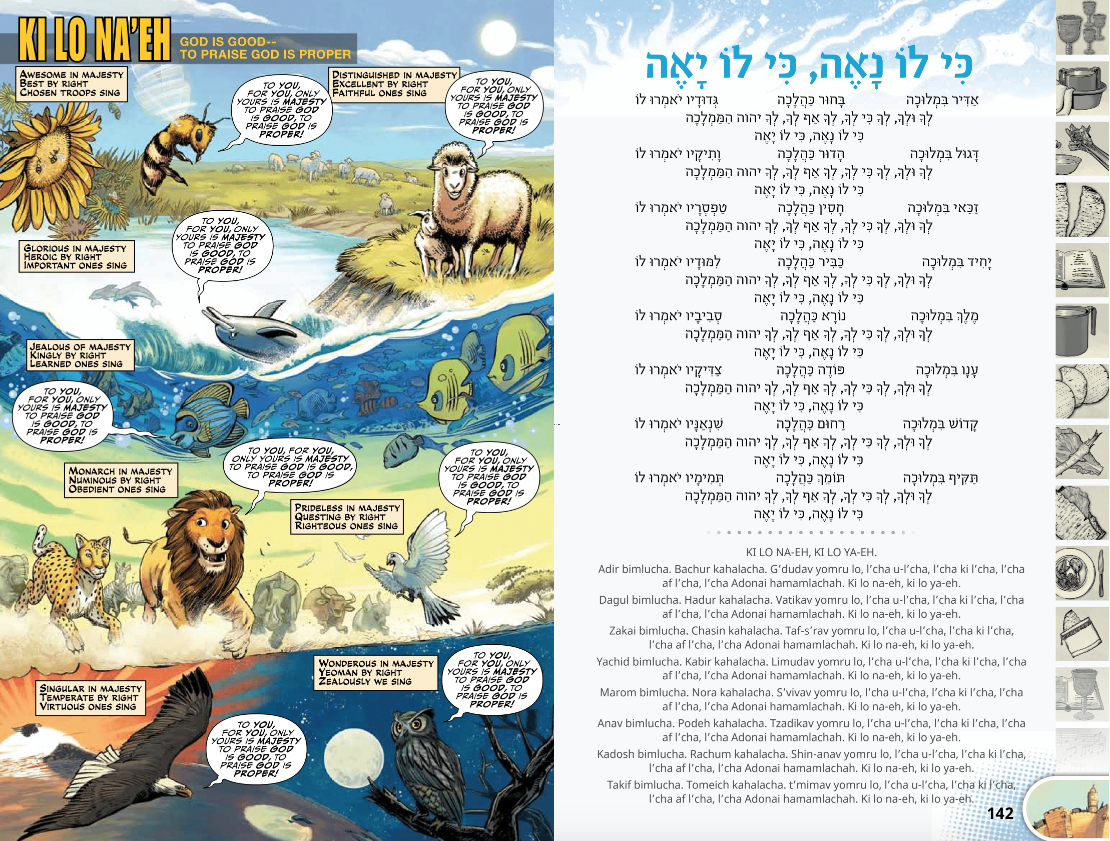 He shared his conception of the book, and some early drawings, with a small circle of supporters, and adapted it according to their critiques. And he consulted experts in history, archaeology, theology and other disciplines to ensure its authenticity.

Gorfinkel’s Haggadah is the new face of the Passover text, arguably the most-published Jewish book in Jewish history, and one that has morphed in recent years into a palette for self-expression. If you are religious or secular, artistic or intellectual, serious or humorous, any description of Jew (and to a growing degree, non-Jew), there is a Haggadah for you. (Gorfinkel’s own “go-to” Haggadah is the classic Maxwell House Haggadah, which dates from 1932.)

A Haggadah in graphic novel form is a perfect adaptation for the millennial generation that was raised in an atmosphere of individualized iTunes playlists, said Rabbi Elly Krimsky, program director of NJOP (formerly the National Jewish Outreach Program). Today, he said, people can find Haggadahs that reflects their way of thinking, that speak their language. “Instead of just reading a text,” Rabbi Krimsky said, “they want to see how the text provides meaning for them.”

“The words are almost an outline” of seder themes, not necessarily meant to be recited by rote, but to be interpreted and explained, the rabbi continued. “The seder needs to be geared to the people at the table … as long as you don’t stray too far” from the seder’s theme of liberation and deliverance. “It’s meant to be interactive … there is much flexibility” in its style. 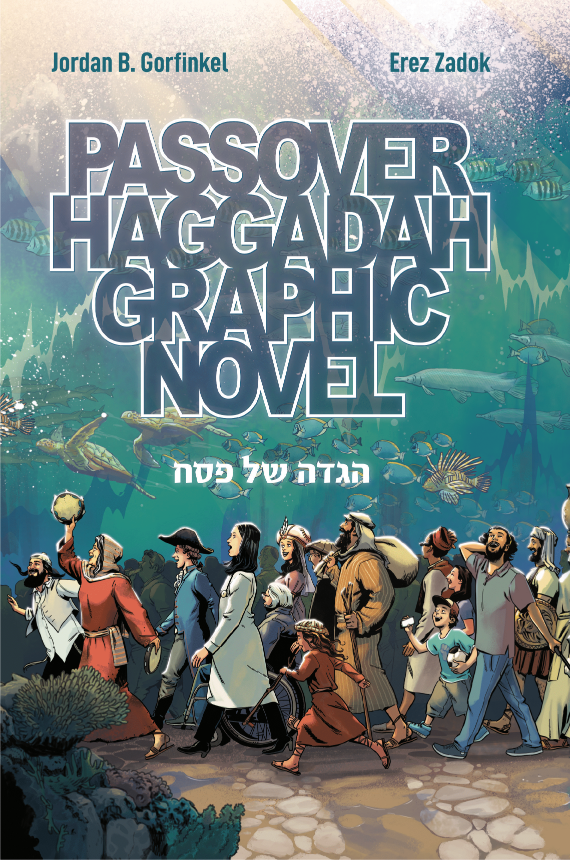 The cover of the new graphic noverl haggadah. Courtesy of Koren Publishers

Gorfinkel realizes the new cultural imperative. His goal, he said, is to make the 3,300-year-old liberation account transcend any particular denominational affiliation or time period or geographic setting. That’s why his graphic novel shows men and women as punk rockers, kibbutzniks, Revolutionary War soldiers, whites and blacks, ancient Egyptians and modern-day chasidim, businessmen and backpackers … the list goes on.

As for the goats, Gorfinkel calls them avatars. Incarnations in human-ish (or in this case, two-legged, seder-leading) form. Seder-goers can  themselves sitting with the unnamed goat family at the seder table; just as you’re supposed to imagine yourself on Pesach night taking part in the exodus from slavery, you can picture yourself in the graphic novel’s version of Jewish history.

Father goat, outfitted in a Superman-style costume (a matzah on his chest instead of an “S” in a pentagon), states, by way of introduction, that “We’re connecting a new generation to our living history, by illustrating the fully unabridged, authentic text in the sequential storytelling style of comics – a Jewish innovation, you know.”

The words in the text sometimes spill into Gorfinkel’s own explanations of what he’s up to in “Passover Haggadah Graphic Novel.”

“The sequential art medium,” he wrote in an email, “is the most primal format for delivering layers of depth in print,” he said. “If we did our job right, this Haggadah is like a good Bugs Bunny (or, dare I suggest, ‘The Simpsons’) cartoon: Wherever you’re at, you’ll enjoy the experience.”