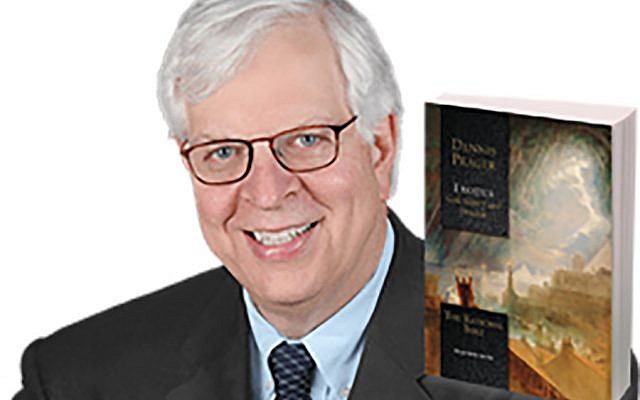 Whether on parchment or paper, the Torah continues to be the most intriguing and enchanting book (or scroll) ever composed, revered in the Bronze Age and Atomic Age alike. It surely is the only book whose exact same text (in Hebrew) is studied by first graders and doctoral students. While translations have been around since the Greek Septuagint, translations were always the welterweight division for Jewish scholars, interesting but secondary to the heavyweights who did line-by-line commentary. An early Aramaic-Aggadic version by Onkelos was so revered that legend traces it to Mount Sinai. Rashi, whose commentary is considered the granddaddy of them all, was published (without biblical text) in the first Hebrew book ever printed, in 1475. The Talmud says the weekly Torah portion should be studied three times — once with commentary.

All of which is to say that Dennis Prager’s recent Torah commentary, beginning with Exodus (edited by Joseph Telushkin),  is as ambitious as it is, dare I say it, a masterpiece. (It is the first of five volumes; “Genesis” is due out in May.)

I “dare” because in these exceedingly volatile political times, Prager is best known as a conservative political columnist and nationally syndicated radio host (AM 970 in New York City), dismissed by the left, revered by the right. Yes, best-seller lists are more selective than scientific, but it is curious that Prager’s 520-page “The Rational Bible: Exodus” (Regnery Faith, April 2018) was ignored by The New York Times, neither reviewed nor listed on its best-seller list, while The Wall Street Journal and Publishers Weekly had it at No. 2. (The Times says that among retailers who report sales to the paper, “very few disclosed sales of Mr. Prager’s book” in the weeks after its publication.)

In an email conversation, Prager writes, “Despite my being known as a political conservative, ‘The Rational Bible’ is apolitical. The words ‘liberal,’ ‘conservative,’ ‘left,’ ‘right’ do not even appear.”

Raised Modern Orthodox, Prager, 70, now defines himself as a “religious non-Orthodox Jew” who regularly attends a non-denominational service, the Rorah Minyan in Los Angeles, where he teaches Torah almost every Shabbat. He has been teaching Torah to Jewish and non-Jewish adults for decades, including lecturing at Bar-Ilan University, when not conducting orchestras or leading non-Orthodox pop-up High Holiday services. His “mechitza” dividing religion from politics is high. In a brochure introducing congregants to his High Holiday services, he writes that he would be available “to talk with you and answer questions about God, faith, religion, Judaism, life — anything except politics. … I feel strongly that the High Holy Days not be used as a forum for political advocacy.” His Torah commentary reflects that, as well.

He writes in the preface that he begins his Torah commentary with Exodus (the second book) rather than Genesis (the first) because “Genesis is almost all narrative,” while Exodus is a better introduction to Torah, “in equal parts, narrative, laws and theology.” (Over the next three weeks, the Exodus story is being read in synagogues.)

In the American past, writes Prager in the preface, “virtually every home, no matter how poor, owned a Bible,” and read it daily. “It was the primary vehicle by which parents passed wisdom on to their children.” That was then. Most Jews, most Americans, now have a cursory biblical awareness, if that. With this monumental project, “I want to do nothing less than introduce a generation — in America and around the world — that knows nothing about the Torah, to the most important work in human history.” Several years ago, Telushkin, himself, wrote “Biblical Literacy” (HarperCollins), his own antidote to society’s biblical amnesia.

Prager strongly dissents from the Reform consensus that the Torah is a weave of earthly authors, with some Reform (and Conservative) rabbis even arguing that the Exodus never quite happened as told. Prager says that his commentary’s foundation is “my belief in the Torah as a divine document. … God, not man, is its ultimate source.” When it comes to the authority of Torah, Prager couldn’t be more humble. As he explains in his introduction, he once said of Alan Dershowitz, after a debate, that when Dershowitz differs with the Torah, “he thinks the Torah is wrong and he is right. When I differ with the Torah, I think the Torah is right and I am wrong.” (Dershowitz agreed.)

Prager differs from classical commentators in style and format. Whereas Rashi, for example, rarely offers a multi-sentence commentary to any particular phrase, Prager’s commentaries range from brief to paragraphs. The book, utilizing the 1985 Jewish Publication Society translation in bold print and Prager’s commentaries in non-bold, additionally features more than 30 essays and dozens of sidebars on everything from the obscure (“The Benefits of a Hereditary Priesthood,” or why an “Eye for an Eye” is one of “the great moral advances in history”); to the legal (why the Torah says “Judges Are to Enforce Justice, Not Compassion”); to the contemporary (“The Torah and Premarital Sex,” and analyzing differing Jewish and Christian views on abortion).

Prager’s commentary is in many ways a sequel to his earlier books with Telushkin, “The Nine Questions People Ask About Judaism” (1981) and “Why The Jews? The Reason For Anti-Semitism” (1983). Prager’s commentary answers questions arising from the genocide of Jewish infants during slavery to the difference between belief in God and trust in God.

Like Pope John Paul’s encyclical, “Fides et Ratio” (Faith and Reason), Prager writes, “In the Torah, faith and reason nearly always live together in harmony. And when they do not, I do not deny either.”

As Prager writes about two contradictory verses [Exodus 9:6-16], “Given the Torah’s general historicity and honesty, I am not troubled by the handful of verses I cannot explain.” Rashi doesn’t explain it either.

When it comes to the “hardening of Pharaoh’s heart,” Prager points out that God also hardened the heart of Pharaoh’s advisers and those advisers then advised that Pharaoh free the slaves. Unlike the conventional wisdom, that the hardening took away Pharaoh’s free will, Prager complicates the conventional, returning the onus to Pharaoh.

Even in “The Rational Bible,” not everything can be rationally explained. For example, the text says the plague of darkness could be touched. Some commentators say this darkness was an eclipse, but Prager argues that an eclipse doesn’t create absolute darkness nor could that darkness be touched. Others suggest the plague was a thick sandstorm (as Woody Guthrie describes the blinding dust storms of 1935). Prager disagrees: “A sandstorm would not have spared Goshen” (the district where the Israelites lived). Prager concludes, “This was a miracle. Period.”

Prager sees the psychological component more than did the earlier commentators. For example, when Moses tells God at the Burning Bush that he suffers from a speech defect, Prager points out that the Torah’s development of Moses centers on his inability to talk his way through trouble. When he sees an Egyptian beating an Israelite, Moses — an Egyptian prince, at that point — might have talked to the Egyptian but kills him instead. When Moses intervenes with two Israelites fighting, they turn on Moses with words and get the better of him. When Jethro’s daughters are attacked by a gang at the Midianite well, Moses stands in their way, but doesn’t reason with them, either. (Later, Moses hits the rock, and smashes the Tablets.) Other commentators connect Moses’ speech defect to a mythical childhood incident in which given the choice between gold and coals, he picks up burning coals that scar his tongue. It’s a cute and visual legend for first graders but the pain of Moses’ disability is more acute in Prager’s commentary, where Moses is telling God about his lifetime of frustration and hurt.

Prager does what the best commentators do: They illuminate. They turn an old text like a jewel to the sun, seeing it anew, in unexpected ways.