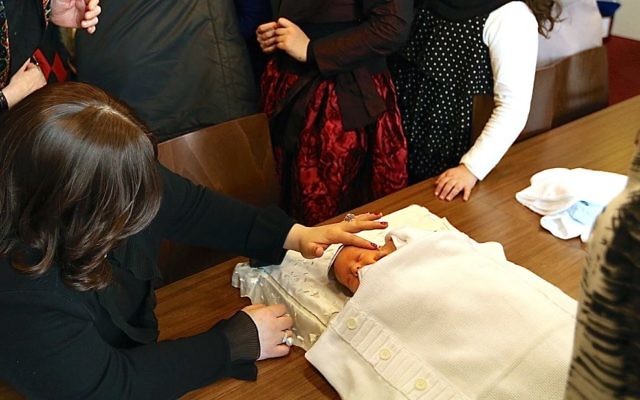 “Moving forward … Every time there is a mohel who performed MbP [metzitzah b’peh] on an infant who has contracted HSV-1, the Health Department will serve them with Commissioner’s orders banning them from performing the ritual,” the new rule says.

A city spokeswoman said that if the mohel tests negative for HSV-1, the ban would be lifted.

The plan is in sharp contrast to the previous policy, which only banned the mohel if both he and the infant tested positive for the same strain of the virus.

Under both the previous policy and the new one, the city is relying on the mohels to self-enforce. A city spokeswoman said HIPAA rules prevent health officials from releasing the names of banned mohels, but that they expect the mohels to comply and that banned mohels will be hit with a $2,000 fine if they don’t.

In metzitzah b’peh, the mohel sucks on a newborn’s penis to cleanse and draw blood away from the incision. It is practiced by more than 200,000 chasidic and black hat Jews, who see it as a religious mandate. About 5,200 circumcisions with MbP are performed each year in New York City. However, the practice can lead to brain damage or death if the mohel transmits herpes to the newborn in the process. Since 2000, there have been 24 such cases reported. Two of the infants died, and at least two others suffered brain damage.

“Do we just blame people by means of association?” said Rabbi Levi Y. Heber, a prominent Crown Heights mohel. “This is what some would call a witch hunt or a modern-day blood libel, where you blame the mohel for something without looking into facts or evidence.”

The city had considered doing DNA testing to confirm that a mohel, and not a family member or caretaker of the infant, was the source of the infection. However, in 2015, the de Blasio administration instead adopted the plan to have the baby and mohel tested to see if the herpes strains matched. (In 2014, a Rockland County health official said that DNA testing exonerated two mohels who were believed to have transmitted herpes to infants they circumcised. Other medical officials have disputed the validity of the finding.)

‘There is the means of testing whether the mohel is the cause or not, and the city is just not interested. If a mohel is linked, he should be banned from the practice. What is the logic of not doing DNA testing?’ — Rabbi Levi Y. Heber, Crown Heights mohel

Asked how the health department can be sure the mohel is the source of the infection if no testing is done to match the strains, a de Blasio spokeswoman said that other factors, such as the timing and location of the outbreak and other data points, give enough information to allow the city to conclude that the mohel is the source.

Rabbi Heber argues that determining that the mohel has HSV-1 is not enough to peg him as the source of the infection because 70 percent of the population has the virus, which causes cold sores. Most cases of neonatal herpes come from the mother during birth. Some come from parents and other caregivers after birth. For example, if the mother touches a cold sore on her lip and then rubs cream on her baby’s bad case of diaper rash, the virus could be transferred that way.

Mohels in Heber’s community would gladly cooperate if the city would determine the source of the infection through DNA testing, he said. “There is the means of testing whether the mohel is the cause or not, and the city is just not interested,” he added. “If a mohel is linked, he should be banned from the practice.

But Marci A. Hamilton, a legal expert on church-state issues and head of the advocacy organization CHILD [Children’s Healthcare Is a Legal Duty] USA, called the new plan “an important and welcome step forward for infant safety.”

The health department’s policies on child health “should be child-centered,” she wrote in an email. “In contrast, deference to a religious organization at the expense of infant health betrays its very reason for existence.  The next needed step is enforcement of such a ban. By creating this bright line rule, the department has created predictability and acted on the right side of preventing harm.”

‘The health department has taken an important and welcome step forward for infant safety. … The next needed step is enforcement of such a ban.’

Mitchell Moss, a professor of urban policy and planning at NYU who has been a vocal critic of the city’s MbP policy as being too lenient, also praised the new plan. But he agreed with Hamilton that it doesn’t go far enough.

“The health department is certainly pursuing the right strategy in banning these mohels,” he said, “but the first challenge is to … prevent the infants from ever getting it.”

Without any testing, it’s unclear whether the new plan will stand up in court, said Marc Stern, general counsel at the American Jewish Committee and an expert in church-state law.

“It clearly marks a hardening in attitude on the part of the health department, but the immediate question that comes to mind is, frankly, the due process clause,” he said.

“The question is going to be how do you challenge the commissioner’s order and who has the burden of proof, particularly because it’s at least not impossible that people will catch HSV in other ways,” he continued. “You don’t even know if the mohel has HSV. It’s one thing if you ban them temporarily while you figure it out. It’s another if you issue a permanent ban if you’re not sure they’re [the mohel is] the carrier.”

“I imagine what the commissioner is saying is since HSV in infants is unlikely … if a kid comes down with HSV so soon after circumcision with metzitzah b’peh, the presumption is that it passes from the mohel because the other sources are unlikely and therefore an immediate ban is necessary — that will be the argument,” he said.

“I don’t doubt that at the end of day that the department [of health] will find a way to ban people who spread disease through metzitzah b’peh from performing it,” Stern said. “They’re on pretty firm ground at bottom; they’ll just have to find a way to get it done. And we’ll see what the courts say about it.”

Under the new plan, the health department will also: “send out a health alert every time there is a new case of neonatal herpes affiliated with MBP”; “tailor its EPI [epidemiologic] investigations to fit the linguistic and cultural norms of the community”; and “amend its educational materials, and process for distribution … shar[ing] these materials with a wider net of healthcare providers.”

The educational materials will still advise parents to not participate in MbP. But if parents can’t be swayed, the materials advise them to “ask mohels if he has virus and/or outstanding commissioner’s orders banning him from performing the ceremony.” If the answer is yes, parents should find a new mohel, the health department advises.

This story was updated at 4 p.m. on March 31 to include the fact that the ban could be lifted.