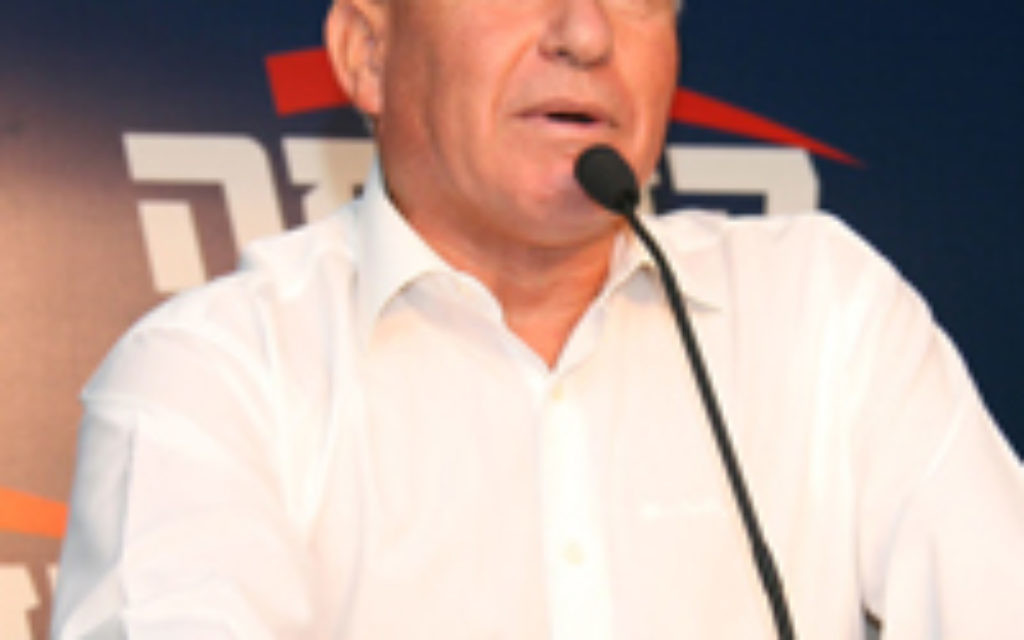 Avi Dichter, a former head of Israel’s Shin Bet (internal security service) and a former minister of internal security, is a Knesset member from the Kadima Party. He was one of six Knesset members who spent last week meeting with Jewish leaders here and in Boston to learn about the American Jewish community as part of a new effort launched by the Ruderman Fellows Program and Brandeis University. The Jewish Week caught up with him for a wide-ranging interview touching on everything from diaspora Jewry to the Goldstone report to Israel’s new missile-defense system.

Jewish Week: You met with such Jewish leaders as Abe Foxman of the Anti-Defamation League, Howard Kohr of AIPAC, Jerry Silverman of the Jewish Federations of North America, and heard from a panel representing the three main branches of Judaism. What is your overall impression?

Avi Dichter: I was surprised by some details. For instance, we were briefed about the number of Jews in America. An Orthodox rabbi said it was 5.2 million and a Reform rabbi said it was 6.5 million. A 25 percent difference is not easy to digest. How come? And one said it is closer to 8 million if you take into account the kids of intermarried families who according to halacha [Jewish law] are not Jewish but get to go on Birthright [trips to Israel] and attend Jewish camps and are brought up Jewish. I am a person of strategy and details and it was interesting to get those answers.

What did you learn about Birthright?

We got the message that Birthright is one of the most important contributions to strengthening Judaism among the young generation. I’ve seen them in Israel — 3,000 of them from all over the world in Binyanei Haumah [the convention center in Jerusalem] — with flags from the State of Israel and all other countries. I see the happiness on their faces and you really say, “Wow.” About 200,000 have come on Birthright but about double that register and cannot go. So the inevitable question is, why not double the project? Everybody agreed it should be doubled and it can be. We are going to take that back to Israel and ask the government, because its contribution is about one-third [of the overall cost] — and it’s not that huge.

It is said that the American Jewish establishment perpetuates a hawkish view of Israel in the Middle East that is out of step with young people here. How would you garner more support among young people in behalf of Israel?

I think, as we say, the future belongs to the young generation and we have no option but to make sure the young generation in the States and Israel are better connected to ensure the continuation of Jewry in both places. Birthright is a huge example that shows that whenever you bring young people to Israel they get connected to the state and the values of Israel and the borders of the Jewish state right away. It’s very easy to fall in love with the State of Israel.

Birthright brought 200,000 young people in 10 years. If it is so fantastic and important, why not have 400,000 in the next 10 years? That is going to be my effort — to see how we can increase dramatically the number of young people from the States visiting Israel on Birthright.

In recent days Hamas terrorists in the Gaza Strip have fired rockets and missiles into Israel, including at least nine that were destroyed by Israel’s anti-missile system, Iron Dome.

For you and those in America it is a good story. For me, I live in Ashkelon and my mother lives in Ashkelon. I had to call my wife and mother [Thursday] and hear from them that they heard the booms of the Iron Dome shooting down the Katyusha rockets. … [The Iron Dome] is going to cost billions but it’s worthwhile. Just as we built the fence along the West Bank, Iron Dome is a fence in the air. It is to block rockets from the Gaza Strip hitting Israeli villages and cities, and it is to frustrate the terrorists in the Gaza Strip once they know that their rockets are hitting nowhere and that the Israeli response is very accurate and painful.

What is your reaction to Judge Richard Goldstone’s limited retraction of his controversial report in which he now says Israel did not deliberately target civilians in the Gaza war two years ago?

It was a stupid report based on lies and professional lies given by Palestinian terrorists and arch terrorists, and it caused us huge damage. Looking back, I think it was a mistake not to hand over information to the [Goldstone] committee when it worked on the investigation. Even Goldstone finally understood that he wrote a book of lies. It’s too late to convince the world that he described an operation that is totally different from what took place.

We are using military equipment like bombs and other systems that are supposed to be accurate. But the gap between 100 percent accurate and 99 percent is what causes innocent people to be injured and killed, while terrorists from the Gaza Strip launch artillery, rockets and shells in order to hit innocent people. They know the probability is 100 percent that innocent people will get hurt and that by a miracle they may hit a military position. That is the difference between the two sides.

How do you think the Israeli government should respond to the unrest in Arab countries whose populations are seeking to overthrow their autocratic rulers?

Sometimes [it’s better to] keep quiet. We are not involved in it, and what is going on in the Arab countries and maybe the Muslim world refers to only one issue: none of those countries — not even one — is close to democracy. The uprisings in those states is probably another trial to get something that brings them closer to democracy.

The only democracy in the whole region is Israel. I’m afraid this will continue even after all the changes around happen.

And all the uprisings in the countries around us are another proof to those countries and the U.S. that Israel and the Palestinian conflict are not the cause of all problems in the Middle East — not the revolution in Tunisia, nor in Egypt, Yemen or Syria. Those leaders who try to put the Israeli-Palestinian conflict as the reason for all the problems in the Middle East are simply disconnected with reality.

How do you assess Hamas in the Gaza Strip?

I’ve heard some say there is a way to sign a peace treaty with Hamas or get into peace talks with Hamas. They don’t understand that Hamas is a finger in the palm of the Muslim Brotherhood, which doesn’t recognize borders or nations, only an Islamic region. So those for whom Israel is an eternal asset should understand that the Muslim Brotherhood cannot be a partner for a peace treaty with Israel. The Gaza Strip has to be demilitarized the same as the West Bank, and if that is not going to be reached by agreement, it will have to be reached by force. … It will not be able to remain an entity of terrorists with military equipment.