Dykstra, 55, a three-time All-Star who played for the New York Mets and the Philadelphia Phillies and retired from the game in 1996, attends Torah study every Wednesday afternoon in the basement of the Ambassador Wines shop on New York’s East Side, with Rabbi Shmuel Metzger, who runs the Chabad at Beekman-Sutton, the New York Post reported.

Dykstra was raised Christian and has no plans to convert, according to the Post.

“I’m on a spiritual journey,” he told The Post. “I’m trying to find if God exists. I want to deal with people who are smarter than me.”

Metzger told the newspaper that he grew up a Mets fan and reached out to Dykstra after seeing a video on Twitter in which Dykstra was explaining the story of Adam and Eve and realized that the former Major Leaguer “gets it.”

Dykstra sometimes uses salty language and non-traditional examples to explain the biblical passages he is learning. 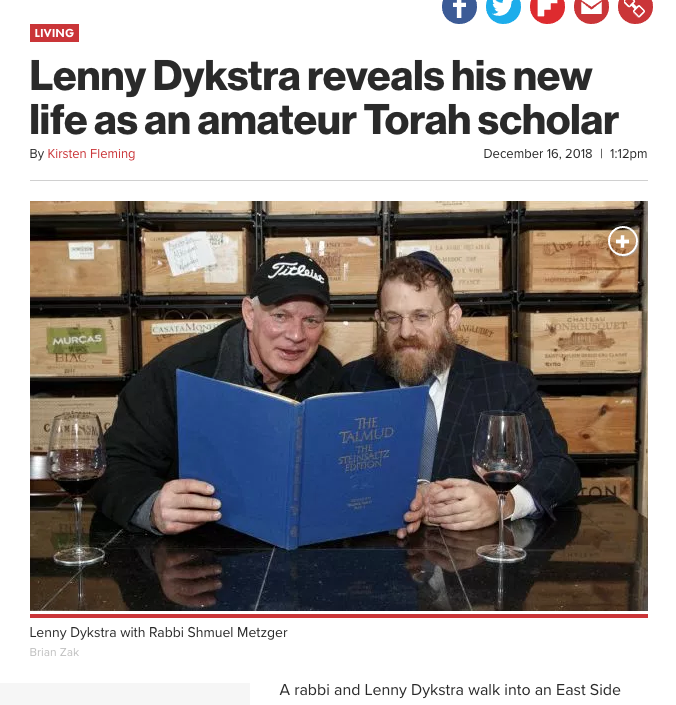 “We enjoy his company and he’s a great guy. A lot of fun. We can handle his [unsavory] language,” said Metzger of Dykstra. A classmate says Dykstra “comes at it from a very raw angle.”

Dykstra was arrested in June for alleged cocaine and meth possession and for menacing an Uber driver. He says he is the victim.

According to his Twitter feed he is serving this week as campaign ambassador for the Chabad at Beekman-Sutton year-end campaign.